Will this woman be Israel's next political star?

As Knesset member Orly Levy-Abekasis promotes her newly formed party, her popularity already points to a changing of the old guard in Israeli politics. 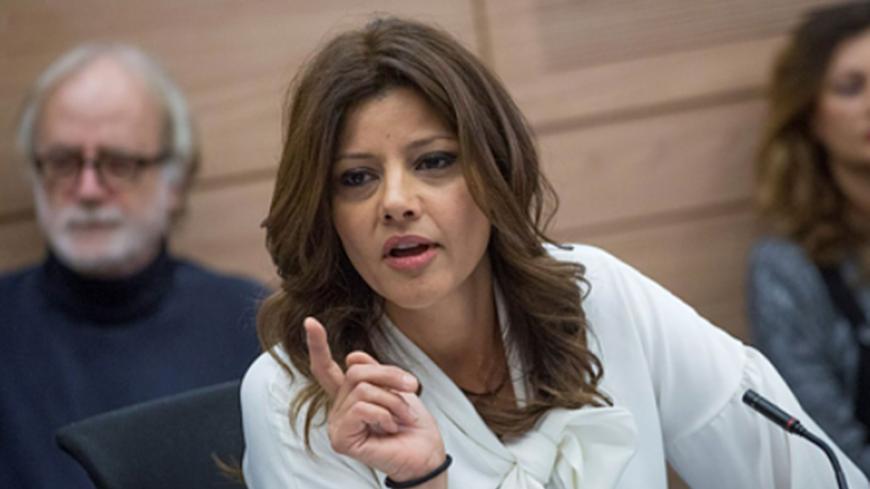 Orly Levy-Abekasis is pictured in an image uploaded March 7, 2018. - Facebook/JOLNews

Knesset member Orly Levy-Abekasis announced the establishment of a new party March 6. Opinion polls published in the days that followed were flattering, and it seems that the old, established parties with strong social platforms have reason to be worried. True, her latest achievement exists only on paper, but the recent Hadashot poll that awarded her new party five seats is telling.

Intriguingly, the poll gave her more support than the leader of her former party Yisrael Beitenu, Defense Minister Avigdor Liberman. The poll gave him only four seats, meaning that he could find himself below the threshold and out of the Knesset in the next election. Levy-Abekasis left Yisrael Beitenu in a huff in May 2016, when she was excluded from negotiations with Prime Minister Benjamin Netanyahu that eventually put Liberman in the Defense Ministry. Liberman also decided not to make Levy-Abekasis a minister even though she was second on his list and a highly regarded Knesset member in her own right with an impressive record of social legislation.

No less interesting than the emerging battle between Liberman and his former protege is the way that this young Knesset member, who focuses on social issues such as public housing and the rights of women and children, has surpassed both the current defense minister and a former one, Moshe Ya’alon. According to the poll, Ya’alon, who is also trying to form a new party, would not meet the electoral threshold.

Also trailing behind her is the chairman of Shas, Interior Minister Aryeh Deri, who was also given just four seats and is teetering on the electoral threshold. Another man who could suffer from Levy-Abekasis’ momentum is the chairman of Kulanu, Finance Minister Moshe Kahlon. Though Kahlon was once branded as a powerful social warrior, the most recent poll gives him only six seats, almost half of what he won in the last election.

At first glance, Kahlon and Levy-Abekasis seem to check all the same boxes. They both come from Mizrahi families, they both grew up in the periphery and they were both raised in Likud homes. They both have a clear social agenda. But his years as finance minister have worn away much of Kahlon’s appeal, while Levy-Abekasis’ new party seems like a breath of fresh air in the next election. She is an articulate woman, a social warrior with a record of success, and she has public and media appeal. She will have many advantages in the important new media platforms.

A major boost for Levy-Abekasis’ emerging campaign came in the form of an announcement from the office of Education Minister Naftali Bennett on the evening of March 15 that the Israel Prize for Lifetime Achievement would be awarded to her father, former Foreign Minister David Levy. Bennett and the award committee wrote, “David Levy’s personal story is the story of a boy who immigrated to Israel from Rabat, Morocco, to a transit camp and then a development town, and from there jumped to the heart of public and social activity within the melting pot of Israeli society.” They went on to call Levy “a social fighter for the weaker sectors of the population, a workers’ leader and a representative of the development towns and the periphery.”

Levy-Abekasis is the ninth of Levy’s 12 children and the second with a career in national politics. Her elder brother Jackie Levy now serves as the Likud’s deputy minister of housing. Public sentiment toward her should warm further when her father is given that prestigious award on Independence Day. It will certainly boost her brand as a social warrior. After all, she is the daughter of a trailblazer who shattered the glass ceiling for Mizrahim in national politics.

When Levy-Abekasis announced that she was founding a new party with a social and civil platform at the Sderot conference earlier this month, it should have come as no surprise. She had been laying the groundwork for a year and a half. Throughout that time, established and new parties invited her to join their ranks, including an attempt by Ya’alon to include her in his new party. Instead, Levy-Abekasis decided to go for it on her own.

“Why is it legitimate to have a former model serve as finance minister and manage the state budget one minute after he decided to run for Knesset?” she asked at the Sderot conference in a stinging reference to former Finance Minister Yair Lapid. “But when I get up after nine years in politics, after everything I’ve done, and announce time after time that I will be forming my own party, journalists still insist on asking me which party I will be joining. What’s not clear? I am forming a new party, I will head it, and I will represent the public without bias.”

There are very few women heads of Israeli political parties. Even fewer have founded new ones. What should make Levy-Abekasis a rising political force is her potential to draw a diverse group of supporters, including women, Mizrahim, residents of the periphery and voters with a strong social agenda. Before every election in Israel, there is a large number of undecided voters. As a highly regarded and active politician untainted by scandal, Levy-Abekasis could attract these voters, too. She could also “steal” votes from parties like Yesh Atid, the Zionist Camp and of course, Kahlon’s Kulanu and Shas, whose chairman vowed to fight for the “invisible sectors” of the population but who, according to the most recent polls, may not even pass the electoral threshold. While Shas is an ultra-Orthodox party, it also has a voter base of Mizrahi women who could end up supporting Levy-Abekasis. It is actually Liberman’s base with which she has the least in common, since his hardcore supporters are Russian immigrants.

In an interview the day after the poll’s findings were released, Abekasis seemed confident that she could win even more seats in the next election than the poll predicted. She said that she’s “going for a big win.”

Her parliamentary activity never included diplomatic issues, even when she was part of the right-wing Yisrael Beitenu. When asked about her foreign policy positions, she presented a moderate line on the Palestinian issue, though overall, she always preferred to focus on social rights and other civil issues as her primary ideological concern.

The 44-year-old mother of four represents a changing of the guard in Israeli politics that places her alongside other prominent political figures like Bennett, Justice Minister Ayelet Shaked and the new chairman of the Labor Party, Avi Gabbay. Assuming she succeeds in gaining supporters, she has a good chance of becoming a minister in the next government. She may even hold the balance of power.