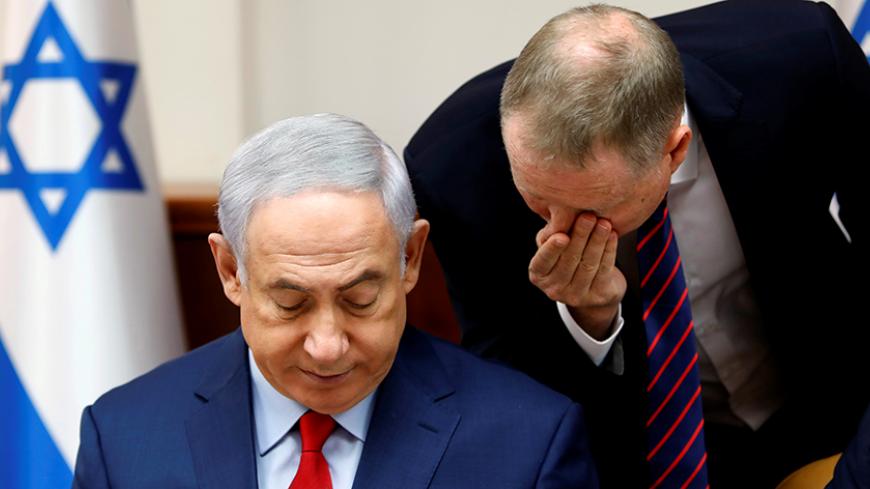 Israeli Prime Minister Benjamin Netanyahu listens to an adviser at the start of the weekly Cabinet meeting at his office in Jerusalem, Aug. 6, 2017. - REUTERS/Gali Tibbon

On Aug. 4, the investigations into Prime Minister Benjamin Netanyahu turned from dark clouds hovering over his head to the perfect storm. Netanyahu’s twice former chief of staff Ari Harow, the person who served as Netanyahu’s ultimate confidante, with access to all of his most intimate chambers, signed an agreement with the State Attorney's Office. Harow agreed to be a state witness against Netanyahu.

It is hard to imagine Netanyahu receiving any more of a resounding blow. Harow gave detailed testimony against the prime minister, giving a major boost to Case 1000 (the gifts allegedly received by Netanyahu from businesspeople in exchange for favors) and Case 2000 (Netanyahu's conversations with the publisher of Yedioth Ahronot Arnon Mozes for a positive coverage deal). It is also conceivable that Harow will provide information on other cases involving Netanyahu, such as the submarine affair or the far-reaching investigation into Bezeq phone company and the Ministry of Communications.

Once Harow signed the agreement with the State Attorney's Office, the question whether the prime minister will eventually be indicted suddenly became irrelevant. Unless something completely unexpected happens, all that is left to be asked is when he will be indicted. While Israeli law states that a prime minister can continue in office until he is convicted, Netanyahu's situation is desperate. Poll results released by Channel 10 on Aug. 6 show that some 51% of Israelis do not believe the prime minister's version of events, as compared to 27% who do. When asked whether Netanyahu will have to resign if and when he is indicted, 66% of respondents answered "yes."

This is very bad news for Netanyahu, but there is more. The polls now show that if Netanyahu resigns and is replaced as leader of the Likud, the number of seats the party stands to win rises from 27 to 31. While Netanyahu should find these numbers disconcerting, what really keeps him up at night are the ongoing investigations.

Harow was born in Beverly Hills, California, 44 years ago to a religious Jewish family with deep Zionist roots. He was the director general of Friends of the Likud in America, and it is suspected that he broke the law by using this position to help fund various activities by Netanyahu and his family.

But this kind of help was just the beginning of the romance between Harow and Netanyahu. Over time, Harow became one of the people closest to the prime minister. He was responsible for the entire fundraising campaign and for relations with dozens of foreign billionaires who maintained relationships with Netanyahu. It was in this capacity that he is suspected of helping Netanyahu raise money for political purposes, not always in accordance with the law.

Harow was later appointed chief of staff in the Prime Minister's Office, a position he held on two separate occasions. Between his two terms, he formed a strategic consulting firm, exploiting his ties with the highest levels of the Israeli leadership for personal gain. This was Harow's failing. He came under suspicion of receiving bribes and of other criminal behavior. In an effort to extract himself from a prison sentence, he agreed to tell police investigators just about everything he knew about Netanyahu's activities, and he signed an agreement to become a state witness. According to this agreement, Harow will be sentenced to half a year of community service and a fine.

Harow is intimately familiar with Netanyahu's ties to his donors, down to the very finest details. He was responsible for the flow of money and managed the fundraising efforts. In other words, he knew everything, saw everything and did everything. At Netanyahu's request, Harow also recorded the series of secret meetings between the prime minister and Mozes. His testimony about this is especially critical. Only Harow can say whether Netanyahu also took action after plotting with Mozes to weaken the influence of Israel Hayom, the free daily newspaper controlled by billionaire Sheldon Adelson, in exchange for more friendly coverage by Yedioth Ahronoth.

If Netanyahu acted as a result of these talks, he will be indicted for bribery. It is worth noting that Adelson himself testified twice about this incident. According to Israeli publications, he confirmed that during this period, Netanyahu sent out feelers to him, asking whether Adelson would agree to cancel distribution of the free daily on Fridays, the most important day for the Israeli print press industry.

Harow is also expected to provide Case 1000 (the gifts) with the material it needs for the most serious indictment: receiving a bribe. He will confirm existing evidence in the case and help investigators prove that the gifts were given to Netanyahu in exchange for specific demands rather than as some natural exchange of gifts between friends. Harow is also expected to provide police investigators with the names of many additional donors and more details on how the system worked. This should put an end to any reservations that Attorney General Avichai Mandelblit still has about the gifts.

Harow is very bad news for Netanyahu and his family. The only nightmare scenario worse than Harow giving evidence would be if Netanyahu's personal lawyers David Shimron and Isaac Molcho, who also happen to be family members, turned against him. Harow surely remembers details about Netanyahu's financial activity over the past 15 years, which even Netanyahu forgot.

Netanyahu spent most of his efforts this weekend applying pressure to Likud ministers and Knesset members to speak out in his defense. Some of them may have responded, but they were not too happy about it. As long as the investigations — and the ensuing leaks from the investigations — continue, it will get harder for Netanyahu to organize real support. Within the Likud, a bloody war of succession is taking place behind his back. Almost everyone involved in politics is preparing for the day after, even if they continue to sit right in front of him and declare their unswerving support. Among those competing to take over from Netanyahu is Yisrael Beitenu head Avigdor Liberman, who now serves as minister of defense. He will try to return to the Likud or to exploit the fall of Netanyahu the same way that late Prime Minister Ariel Sharon exploited it the last time around (1999-2000). Also competing to take over from Netanyahu will be several senior Likud members, such as former Minister Gideon Saar and Ministers Yisrael Katz and Gilad Erdan. Finance Minister Moshe Kahlon, who quit the Likud to form the Kulanu Party, will also consider a return to the Likud. Similarly, former Defense Minister Moshe Ya'alon, who also left the Likud because of Netanyahu, will try to use Netanyahu's fall to build himself up.

The long knives have already been drawn, but their time has not yet come. Netanyahu has no plans to give up without a fight, and in cases like this, there is no more determined fighter than him. It's not over yet, though the grand finale is already starting to poke out on the horizon.