The many scandals directly or indirectly involving Israeli Prime Minister Benjamin Netanyahu, coupled with media criticism over his handling of the Temple Mount crisis, are seriously destabilizing his administration. 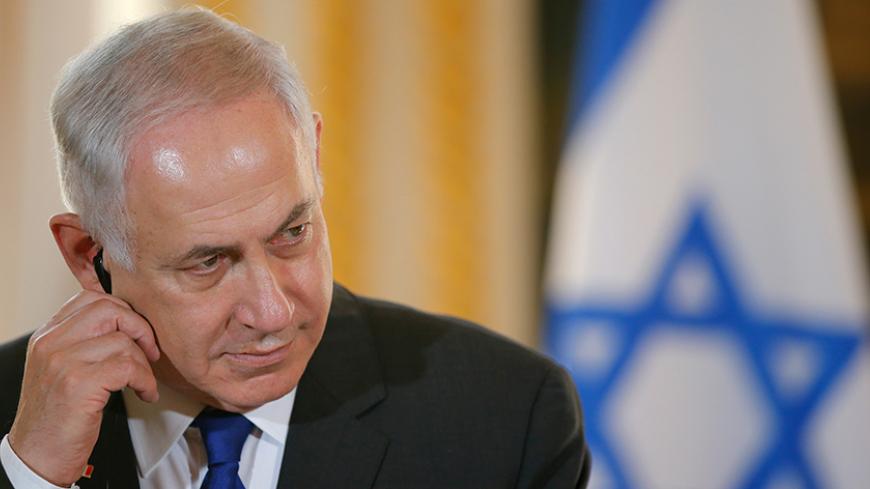 For the last four days, an expanded team of elite police investigators have been sitting with Israeli businessman Miki Ganor collecting detailed testimony from him. Ganor represented German shipbuilder Thyssenkrupp in the submarine purchase deal signed with Israel. This lengthy interrogation is expected to uncover an enormous iceberg of corruption in the state's military acquisitions program over the past few years. Meanwhile, quite a few senior officials in Israel have lost sleep over this. The state witness agreement signed with Ganor on July 21 could incriminate a huge group of top-ranking officials in the security establishment and maybe even reach the political leadership.

As a representative for Thyssenkrupp, Ganor was behind the attempt to acquire three additional (and unnecessary, from the Israel Defense Forces’ point of view) submarines for the Israeli navy. He also tried to privatize the navy's maintenance services and shipyards and acquire two additional cruisers and four anti-submarine vessels that no one in Israel really needs.

Ganor is considered to be the driving force behind the corruption in the submarine scandal, which has been covered by Al-Monitor on numerous occasions. The very fact that the state attorney's office reached a deal with him, under which he will receive one year in prison and have to pay a steep fine, testifies to the working assumption that Ganor will bring down other people bigger and better than him. A sensitive seismograph can already feel the signs of a major earthquake rapidly approaching, which will soon wreak havoc on the highest levels of Israeli society.

But with all due respect to other senior officials, the really important question here is whether Prime Minister Benjamin Netanyahu will find himself implicated in this volatile scandal, too. As of now, the state attorney's office is standing by its statement that the prime minister is not under suspicion of involvement. The thing is, given the mechanics of such investigations, that could change in the blink of an eye.

One person who is implicated in the scandal is attorney David Shimron, Netanyahu's cousin and one of the people closest to him. The relationship between Shimron and Netanyahu is reminiscent of the relationship between Jared Kushner and US President Donald Trump. In the case of Shimron, however, the relationship is much older, going back dozens of years. Shimron is Netanyahu's closest adviser, his personal attorney and the person who has handled the prime minister's most sensitive affairs, both political and economic.

Even among supporters of the Likud, it is hard to find Israelis who believe that Netanyahu didn’t know that his own cousin and attorney was the intermediary (serving as Ganor’s legal representative) stirring the pot in this major deal, while the prime minister used his position to propel it forward in Israel's corridors of power. Even if the flames bursting out of Ganor's flamethrower fail to reach the hem of Netanyahu's robe, the public damage already caused, and that will be caused to him as a result of this scandal, is serious. For the first time, the submarine affair has the potential to crack the heavy armor that has always protected the prime minister's public image, particularly among his supporters.

The submarine scandal is not the only ticking time bomb on Netanyahu's desk. Sitting beside it is another scandal, just as big, in which some of the prime minister's closest confidants are entangled. This is the investigation into Bezeq, the Israeli telecommunications giant that controls a huge share of the internet, telephone and television market. The main suspect in this case is Shlomo Filber, the director general of the Communications Ministry. Evidence collected against him points to him being a Bezeq "spy" at the critical intersection, where key decisions are made, i.e., in the nerve center of Israel's telecommunications industry.

It should be remembered that Netanyahu himself was minister of communications until February 2016, when a court ordered him to step aside, and that he still considers matters pertaining to communications to be a major asset, featuring at the top of his agenda. Netanyahu had his coalition partners sign that they would agree to everything he did in the area of communication. He then went on to fire the ministry's director general on his first day on the job and inserted Filber in the slot to replace him. Filber had already been Netanyahu's "special operations" person for over 20 years.

The stench emanating from this scandal has affected the entire Israeli telecommunications market. While the investigation is focused on Filber's serious conflicts of interest, it is certainly possible that it will expand to encompass his boss, Netanyahu. Netanyahu's relationship with the owner of Bezeq, businessman Shaul Elovitch, was well-known even before the investigation began. Only recently, however, was it discovered that the conflict of interest agreement that Netanyahu signed when he took over the Ministry of Communications contained no mention of that relationship. What this means is that it is possible that Netanyahu could be indicted for submitting a false affidavit. While this investigation is only just beginning, the number of people arrested and interrogated because of it is already astronomical. The shockwaves could reverberate all the way up to the prime minister's office.

In addition to these two scandals are two "older" investigations, "File 1000" and "File 2000," in which Netanyahu is the prime suspect. File 1000 is the investigation into the gifts received by the prime minister. In that investigation, the police are already putting together a recommendation to indict Netanyahu. In the best case, he would be charged with fraud and the violation of trust. In the worst case, he could be charged with accepting a bribe. The police recommendation must first be approved by Attorney General Avichai Mandelblit, who has been under intense public pressure for the past few months to stop dragging his feet and allow the police to finish their work. The main witness in this case is Hollywood tycoon Arnon Milchan. Another potential witness is Australian billionaire James Packer, but the police have not yet succeeded in conducting an overseas questioning procedure.

File 2000 is the investigation into the covert negotiations between Netanyahu and the Yedioth Ahronoth daily publisher Arnon Mozes, in which the two men tried to cobble together a crooked deal between them. The circulation of Yisrael Hayom, the free newspaper most closely identified with Netanyahu, would be diminished and its impact would be limited in exchange for more favorable coverage of Netanyahu by Yedioth Ahronoth. American tycoon Sheldon Adelson — the owner of Yisrael Hayom — has already given testimony about this case on two separate occasions. According to sources close to the investigation, Adelson's testimony did not help Netanyahu.

As it was later learned, many of the conversations between Netanyahu and Mozes were recorded by Ari Harow, Netanyahu’s former chief of staff, who is himself suspected of involvement in various other secondary scandals. Since then, the relationship between Netanyahu and Adelson has deteriorated. Once the red-headed billionaire realized that Netanyahu was using him like an invaluable and powerful toy to advance his own interests, Adelson's attitude toward his protege chilled considerably.

This all came to a climax July 26, with a resounding headline on the front page of Yisrael Hayom, which described the prime minister's response to the metal detector crisis as "terrified, feeble and helpless." The paper's senior commentator went on to write that Netanyahu acted against the interests of the very people who voted for him. In Israel, the headline is considered truly historic. It is the first of its kind in a newspaper that, until recently, was happy to disseminate the talking points released by the prime minister's Balfour Street official residence. The message coming from the article is clear: The house on Balfour Street is now under siege.