The latest developments in the submarine scandal are threatening to drag Prime Minister Benjamin Netanyahu into the affair and out of the premier’s seat. 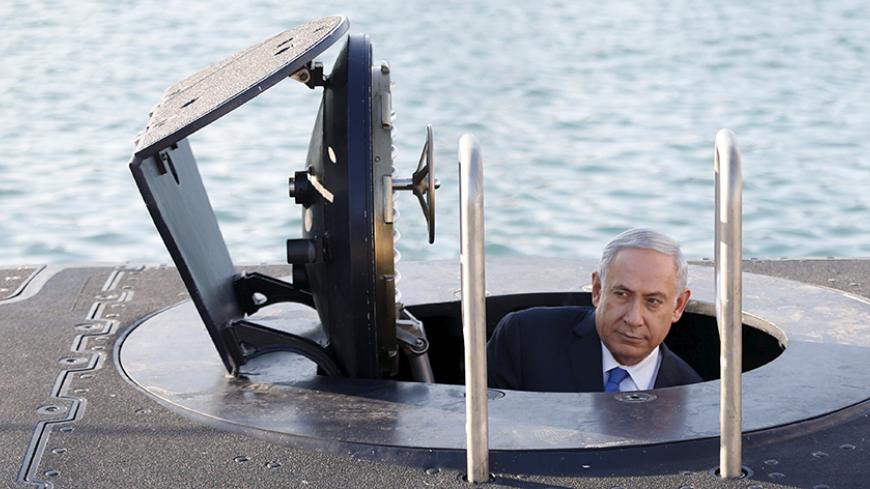 Israeli Prime Minister Benjamin Netanyahu climbs out after a visit inside the Rahav, the fifth submarine in the fleet, after it arrived in Haifa port, Israel, Jan. 12, 2016. - REUTERS/Baz Ratner

Maj. Gen. (res.) Eliezer Marom, the former commander of the Israeli navy, has the reputation of being one of the most daring officers in the history of the Israel Defense Forces. On July 11, he earned another, more questionable honor. He is now the first major general to be interrogated by the police for serious crimes, including graft, and to be placed under house arrest. These actions are part of the police investigation of the German submarines purchased by Israel.

Just one day before Marom, who commanded the Israeli navy from 2007 to 2011, was interrogated, police detained the person closest to Prime Minister Benjamin Netanyahu, attorney David Shimron, who was later placed under house arrest. They also detained Brig. Gen. Avriel Bar Yosef, Netanyahu's former appointee as head of the National Security Council, and businessman Miki Ganor, who negotiated Israel's acquisition of the submarines and other naval vessels from German shipbuilder ThyssenKrupp.

Al-Monitor reported on the "Submarine Affair" several months ago. The current wave of arrests, which jolted Israel July 10-11, drew public attention to the scandal after a lengthy undercover investigation. The arrests in Israel came one week after Germany's National Security Council approved the naval deal between Israel and German shipbuilder ThyssenKrupp, having been convinced that there was no graft on the German side of the deal. The move by the Israeli police was a slap in the face to the Germans, since the deal itself, valued at about $10 billion, now has a very serious question mark hanging over it.

A statement released by the State Attorney's Office in February said that the prime minister was not a suspect in the affair. Now it is obvious that he will have to be interrogated in order to get his version of the series of events and suspicions, as they are now being revealed. The entire episode has caused former Defense Minister Moshe Ya'alon and Knesset member Erel Margalit (Zionist Camp) to call it the biggest corruption scandal since the founding of the state. Ya'alon even took it a step further in an interview with CNN on July 11, saying that he is convinced that Netanyahu himself will also be indicted as a result of the affair.

The question now is whether Netanyahu knew about the involvement of his close confidante, Shimron, in mediating and promoting these deals between the German shipbuilder and Israel's defense establishment. If he did know, it would pose a very serious conflict of interest, even before the possibility that the prime minister was promised financial compensation is investigated. The basis for this conflict of interest is the fact that Netanyahu actively promoted huge deals involving the German shipbuilder. He pushed to acquire three new Dolphin-class submarines, against the advice of the Israeli navy and the defense establishment at large, while attempting to retract an international tender to provide Israel with four patrol boats to protect Israel's gas platforms in the Mediterranean.

Throughout this entire time, Shimron acted on behalf of businessman Ganor, who represents the German shipbuilder in Israel. To complicate matters even further, the person who removed Shaike Bareket, the previous mediator between ThyssenKrupp and Israel, was then Israeli navy chief Marom. Bareket was replaced by Ganor, who had no prior experience negotiating naval deals. What he did have was the backing of the attorney closest to Netanyahu. At the same time, there was an enormous increase in the volume of deals planned between the shipbuilders and Israel, and in the commissions demanded by the mediator of those deals.

Police are now investigating all of these suspicions. Shimron was interrogated for a third consecutive day, for a total of almost 30 hours. Al-Monitor has learned that the police had employed an extensive network of bugging devices against many of the suspects over the past few months and collected considerable information also in various banks. They identified significant sums of money, which were transferred from Marom’s account in Israel to overseas accounts, and they collected other evidence as well. Netanyahu has yet to be interrogated, and the official position is that he is not under suspicion. Nevertheless, no one involved in Israeli politics has the slightest doubt that the flames are getting closer to the prime minister himself.

The scandal could send shockwaves across many other fronts as well. The very legitimacy of the process by which Israel conducts its arms deals could suffer repercussions on deals with other countries. This could include the relationship between the Israeli and American defense establishments, with Israel being a major client of the US arms market. Fortunately, US law makes it almost impossible to pay commissions to agents and mediators with US aid money or other funds. However, it is not especially difficult to get around these laws and find alternatives to make such payments. The last thing that the Israeli arms industry (when it comes to exports) or the Israeli defense establishment (when it comes to imports) needs right now is the spotlight of a police investigation on these very sensitive dealings.

As for Netanyahu, even if he somehow manages to steer clear of being linked directly to the affair, there can be no doubt that the prime minister's image is suffering a serious blow as a result of it. It will be hard to find any Israeli who believes that the prime minister would promote deals worth billions of dollars without him knowing that the deal was being mediated by his cousin and close confidante (Shimron and Netanyahu are related), who also represented one of the parties.

The entire incident is yet another blow on the Teflon-coated steel lining that has protected Netanyahu over the last eight years as Israel's sole prime minister. At the same time, there has been progress in the other investigations into Netanyahu's affairs, including "File 1000" (Netanyahu allegedly receiving gifts) and "File 2000" (his dealings with Yedioth Ahronoth publisher Arnon Mozes). A major investigation into the Israeli communications firm Bezeq is also developing, with another of Netanyahu's close confidantes, the director general of the Ministry of Communications Shlomo Filber, also summoned for police interrogation.

These blows have been landing with increasing regularity over the last year and could cause serious harm to the immune system of Israel's most powerful prime minister of the past several decades. The most current assessment is that elections will not be held as scheduled, but will have to be moved up to the start of next year.