Former Prime Minister Benjamin Netanyahu tried hard to prevent a commission of inquiry into the submarine scandal that has plagued him, but its time has come. 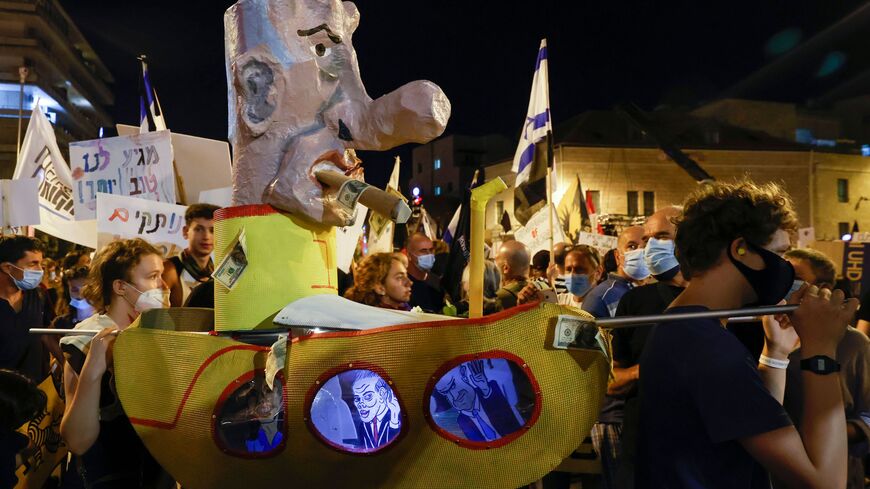 Israeli protesters lift a model of a yellow submarine topped with a representation of Prime Minister Benjamin Netanyahu during an anti-government demonstration in front of the prime minister's residence in Jerusalem on Aug. 15, 2020. - JACK GUEZ/AFP via Getty Images

The scandal involving the acquisition of submarines and other naval craft from German shipbuilder Thyssenkrupp in return for alleged kickbacks has been rocking Israel for over five years, and the end is nowhere in sight. On Jan. 23, following delays, arguments and various problems, the government voted to establish a commission of inquiry to examine the process of defense acquisitions as well as the approval by then-Prime Minister Benjamin Netanyahu for Germany to sell advanced subs to Egypt.

The inquiry is more bad news for Netanyahu, who Attorney General Avichai Mandelblit had previously cleared of all criminal suspicions in the submarine affair. The commission will be empowered to compel Netanyahu to testify, and his testimony could prompt an in-depth investigation of his actions in this complex affair. Perjury would be considered an aggravating factor and is the last thing Netanyahu needs as he tries to negotiate a plea deal in his corruption trial involving unrelated charges.

The so-called “submarine affair” involves the 2009-2017 purchase from Thyssenkrupp of three Dolphin-class submarines and four warships to protect Israel’s offshore gas platforms. Last week, Israel and Germany finalized the purchase of three additional advanced subs, considered Israel’s most important strategic weapon providing second-strike capabilities in the case of a nuclear attack. The new $3.4 billion deal was delayed for years by German unwillingness to sign the contract once the corruption allegations over the first deal surfaced in late 2016.

The delays led the shipbuilder to raise its price, almost doubling the original cost for Israel. Netanyahu supporters are now using this price hike to argue that the repeated delays failed to produce substantiated corruption claims against the former leader and instead cost Israel money and severe delays in supplying the vessels, probably by the end of the decade.

Netanyahu and his allies tried to thwart an inquiry, arguing that most of the allegations that had surfaced over the years had come to nothing and that only a handful of indictments were filed while Netanyahu had been cleared of any involvement.

These claims failed to silence the public clamor for a probe, fueled by shocking revelations about irregularities in the 2016 deal. Dozens of former army chiefs, generals and security officials have been publicly pressing for a probe for the past two years, meeting with top government ministers to explain the severity of their allegations.

Netanyahu’s successor, Prime Minister Naftali Bennett, and his close political ally Interior Minister Ayelet Shaked also tried to prevent an inquiry — Shaked because she is trying to curry favor with the political right and Bennett because he does not set much store in state commissions. Both also wanted to avoid a flareup of the bitter pro-Netanyahu and anti-Netanyahu conflict that lies just under the surface of public and political life in Israel. Nonetheless, a majority of government ministers voted in favor of the probe.

The affair began in late November 2016 with a report by Maariv that Israel was about to sign a memorandum of understanding with Germany for the purchase of three additional Dolphin-class subs, which would expand its fleet to nine, contrary to the military’s position that Israel did not need that many. Several days later, journalist Raviv Drucker reported that attorney David Shimron, Netanyahu’s cousin, lawyer and confidante, was representing Thyssenkrupp’s agent in Israel, Mickey Ganor. A police probe of Shimron raised suspicions of money laundering but after much deliberation, the prosecution eventually dismissed the case. Suggestions that Netanyahu personally stood to gain from the multibillion-dollar deal were never proven. Meanwhile, then-Defense Minister Moshe Yaalon shelved the plan to expand the navy’s sub fleet to nine, and a decision was made that the three newest subs would replace three older ones that would be decommissioned, leaving the fleet at six.

Meanwhile, reports emerged that Israel had scrapped plans to hold an international tender for the purchase of four warships to protect its gas rigs and had decided to buy them from Thyssenkrupp instead. Israeli officials also pressed for the purchase of two anti-sub vessels from Thyssenkrupp, although experts denied the need for them, and another idea arose to privatize the navy's shipyards in the port of Haifa, another move that would benefit Thyssenkrupp.

The police investigations yielded seven indictments against defendants including Ganor, deputy head of the National Security Council Avriel Bar-Yosef and Netanyahu’s former chief of staff, David Sharan. But the campaign for a broader probe continued and the commission will soon begin. Most of its hearings and findings will likely remain classified, as they relate to Israeli national security. Nonetheless, many Israelis are hoping that unlike the police probe, this investigation will shed light not only on defense procurement practices but also on further corruption.

Politically, the commission is a blow for Netanyahu who gave then-German Chancellor Angela Merkel a green light to sell Egypt two submarines similar to those that Israel was buying. Netanyahu reportedly gave the go-ahead without informing his defense minister, military chiefs or the security cabinet. Netanyahu had consistently denied these reports, although Merkel herself informed then-President Reuven Rivlin of Netanyahu’s approval. On live television in March 2019, Netanyahu admitted that he had indeed okayed the sale and claimed he could not explain his reasons since they involved a secret to which only prime ministers are privy.

The military and security alumni lobbying for the state probe are hoping the secret will be revealed to the commission. While Israel and Egypt have been at peace for over four decades, the Egyptian military is still considered a potential enemy. Many have argued that allowing Germany to equip Egypt with the same advanced vessels it sold Israel without informing the relevant bodies was at best ethically questionable and at worst a sign of horrifying corruption and rot. So far, only the tip of the iceberg has been revealed in the submarine affair. The commission will have its work cut out for it.