A scandal over a submarine deal has focused the public's attention and that of Israel's attorney general on Prime Minister Benjamin Netanyahu’s relations with two of his lawyers. 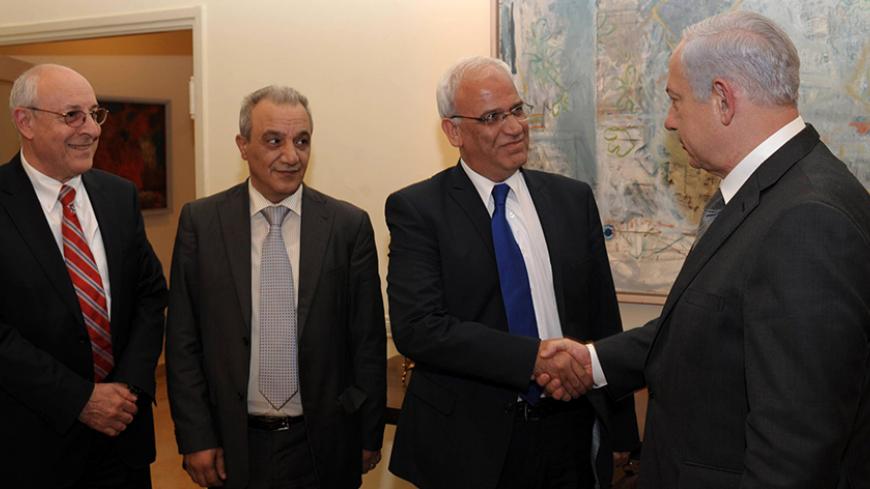 An Oct. 31 Al-Monitor article revealed that a deal was underway for Israel to purchase three submarines from ThyssenKrupp Marine Systems, a German ship-building giant. This past week, the deal turned into a political and media scandal leading to public demands that Attorney General Avichai Mandelblit investigate for criminal facets of the deal. The latest twist in the plot was the disclosure Nov. 15 on Channel 10 that the attorney representing the German shipyard in Israel for the legal aspects of the deal is none other than David Shimron — Prime Minister Benjamin Netanyahu’ private attorney and relative.

Shimron is also the law partner of Yitzhak Molcho, who together own a thriving legal firm that has recently become a “necessary way station” for anyone trying to cut through the red tape of Israeli regulations. Now it turns out that in concurrence with Netanyahu’s initiative to acquire another three submarines for the Israeli navy, Netanyahu’s personal attorney and cousin is receiving payments from Miki Ganor, the Israeli agent who represents ThyssenKrupp in Israel. The affair arouses suspicion of a major conflict of interest on the part of the prime minister’s attorney and perhaps even Netanyahu. People familiar with the close, intensive relationship between the two cousins cannot imagine that Netanyahu did not know that his attorney was representing the shipyard or that the attorney did not know that Netanyahu was pushing a new submarine deal.

The “Dolphin” submarines that Israel is purchasing from the German shipyard are, according to foreign reports, viewed as strategic weapons that can give Israel “second-strike” capability. This means that in the event Israel is hit by nuclear weapons that disable its ability to retaliate, the Dolphins could be used for a second strike.

Until the beginning of the current decade, ThyssenKrupp had been represented in Israel by another agent, Gen. (Ret) Yishayahu Bareket, a former senior member of the Israeli security apparatus who was involved in the acquisition of the first five submarines that Israel received. After Netanyahu rose to power in 2009, things began to change. The German shipyard replaced Bareket with Ganor, a real estate investor also involved in other areas of business in recent years. Now it turns out that under the radar, Ganor brought Shimron with him to serve as the company's attorney.

Given these the deals and personnel changes, Israel halted its contacts with the American shipyards from which it had considered acquiring patrol boats. Instead Israel turned to Germany for the exclusive provision of boats and submarines. At the same time, Netanyahu as prime minister also began to press the security establishment to acquire a sixth submarine. This went against the advice of the most senior members of the defense apparatus, including the Israel Defense Forces chief of staff, Lt. Gen. Gabi Ashkenazi, and the navy commander, Vice Admiral Eliezer Marom.

Beyond the submarine issue per se, the entire affair brought to the public and media's attention the problematic way in which Netanyahu runs Israel, mainly his relations with his two family attorneys, Shimron and Molcho, who divvy up the territory: Molcho takes care of the international front, and Shimron the domestic front.

Molcho has been Netanyahu’s secret emissary for the most sensitive of issues. He runs the peace process for the prime minister, conducts secret contacts with various heads of state and other leaders and even deals with such touchy classified security issues as discussions with Jordan regarding the situation on the Temple Mount. Many arguments have been made over the years against having a private attorney dealing with secret aspects of security-related issues without being a public servant and without being subject to any kind of regulations. Nevertheless, Molcho’s position as the Israeli “Mr. Foreign Affairs” is only getting stronger.

Meanwhile, the Israeli Foreign Ministry, for which Netanyahu holds the portfolio, is getting weaker and being subjected to ongoing privatization. Numerous jurisdictions that originally belonged to the Foreign Ministry have been transferred to other ministers, while Molcho carries out the really important tasks. Many Foreign Ministry veterans in Israel have recently been warning about the destruction of the Israeli foreign service. Netanyahu ignores the background noise and continues to conduct matters via a close clique of personal confidants.

As noted, Shimron deals with domestic matters and represents the prime minister and his family in countless legal issues, including involving the media. He and Molcho have never addressed the question of their payment fees, and the assessment is that they have never received any kind of compensation from the Netanyahu family. They deal with extremely sensitive state issues while conducting thriving private practices. The submarine affair tore the mask off the problematic nature of this course of action.

At this stage, General Attorney Mandelblit has chosen not to pursue a criminal investigation, but he is examining the conflict of interest issue with regard to Netanyahu and his attorneys. Nonetheless, the affair continues to rapidly snowball. Now it has emerged that Shimron arranged to conduct a private polygraph exam for himself on Nov. 18 in which he was asked if Netanyahu had known about his activities as representative of the shipyard that manufactures the submarines. Shimron is waving the results of the polygraph as proof that there were no conflicts of interest between him and Netanyahu, but he ignores one fact: Another prime minister, Ehud Olmert, is sitting in prison for a similar offense. Olmert was convicted for a conflict of interest with his attorney, Uri Messer.

Among other things, Shimron, together with Ganor, was involved in efforts by the German shipyard to have repair and maintenance of Israeli submarines transferred to them, instead of the Israeli navy. Shimron took part in a meeting held on the subject with the chairman of the Histadrut, Israel’s labor union, as the maintenance of ships at the navy harbor is handled primarily by civilians working for the IDF. People who attended the meeting told Al-Monitor that Shimron spoke in a threatening tone.

“When such a person — who is a member of the prime minister’s inner circle and viewed as Netanyahu’s confidant — raises such a proposal to the agenda, everyone knows it’s better off to go along and close ranks with him,” a person who participated in the contacts told Al-Monitor under condition of anonymity.

Privatization of the shipyards would have funneled an enormous sum of money to ThyssenKrupp and certainly to Shimron as well. Will all this eventually be traced back to Netanyahu? At the moment, according to the attorney general, evidently not. On the other hand, the entire affair continues to stir up Israel with new disclosures on a daily basis.

The last word has not yet been spoken.