Could submarine scandal blow up in Netanyahu’s face?

A private report by Zionist Camp Knesset member Erel Margalit claims that the submarine purchase affair and the possible involvement of Prime Minister Benjamin Netanyahu run much deeper than preliminary revelations in the press. 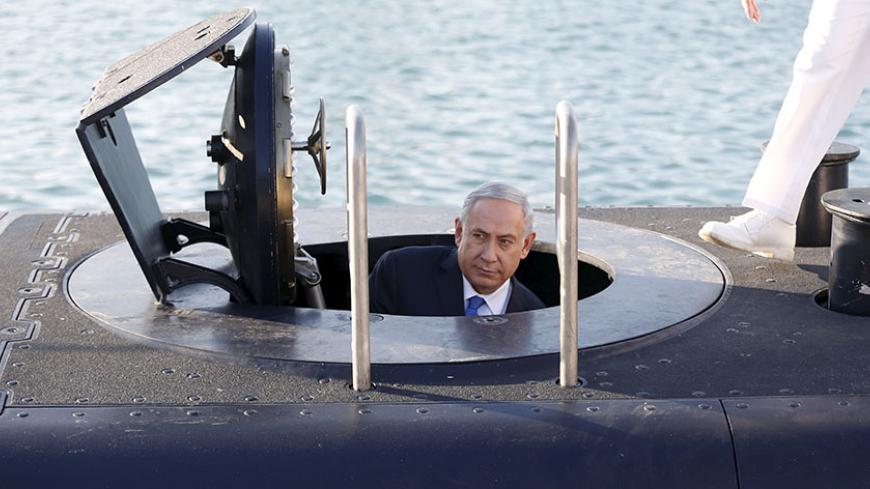 Israeli Prime Minister Benjamin Netanyahu climbs out after a tour around the inside of the Rahav submarine after it arrived in Haifa port, Israel, Jan. 12, 2016. - REUTERS/Baz Ratner

The media may be focused on the pricey cigars and bottles of champagne that the Netanyahu family allegedly amassed from its benefactors over the years, but the police investigation into the submarine procurement scandal is gaining momentum. The scandal, which Al-Monitor reported on at the end of October, is about to become a huge international imbroglio.

Recently, Knesset member Erel Margalit also dived into this quagmire. As a contender for leader of the Labor Party, he hopes to take over from Benjamin Netanyahu one day and become Israel’s next prime minister. Margalit is a multi-millionaire who made his money in the high-tech and cyber industry; his extensive contacts in that industry reach around the world. Several months ago, Margalit launched his own, private investigation into the submarine affair. For that, he traversed Europe, using his own sources. He returned home with a detailed report, which he submitted to Deputy Commissioner Roni Rittman, the commander of Lahav 433, the police unit tasked with investigating national crimes and corruption. “I took advantage of my contacts, I set my sources into action and I met with many people across Europe,” Margalit told Al-Monitor. “I believe that this is the biggest corruption scandal in all of Israel’s history.”

What set this scandal into motion is an agreement that Israel signed with the German ThyssenKrupp corporation to procure three additional submarines for its fleet, even though the Israeli navy has no need for any more submarines. It was later found that Israel also ordered four heavy corvette-class warships to protect its natural gas platforms in the Mediterranean, without issuing an international tender beforehand. The climax came when it became clear that the attorney for these deals was David Shimron, a relative and close confidant of Netanyahu.

Unnamed players caused the removal of the original middleman in these dealings (Shaike Barkat) with the German shipbuilder, and brought in a shady new middleman from the outside. This led to a new splurge of procurements and other business dealings with the German shipbuilder, with Netanyahu’s personal attorney reaping a profit and benefiting from all of them. The big question is whether Netanyahu was in any way involved. Did he know about his personal attorney’s role, and/or did he help him rescind the original tender?

Now that Margalit has submitted his own report, the investigation is shifting to a whole new phase. “At some point," Margalit told Al-Monitor, “these business dealings stopped being the normal kind of interactions between one government and another, as they should have been, and became a corrupt series of exchanges.”

Margalit claims that a subsidiary of the German corporation paid off senior Israeli naval officers for years. This remarkable information was revealed in internal examinations conducted by the corporation itself. The payments appeared as “useful expenses,” which Margalit says is a code word for “bribes.” According to Margalit, the information first appeared in an audit report by a major accounting firm, but the report was shelved and never released. He claims that the findings cover just the tip of an enormous iceberg of corruption, which is only now being revealed. The question is whether just a few retired Israeli officers should be concerned about its findings, or whether the corruption reaches to the highest echelons of power. Margalit has firm opinions about this, too.

“You can find the same pattern of behavior in the way that this corporation interacts with other countries,” Margalit said. “They made special payments like this in their dealings with India and with South Africa, too, where the payments reached all the way to the top of the pyramid, to President Jacob Zuma. If it reached the highest echelons of power there, I believe that it will reach the highest echelons in Israel as well.”

In Israel, the investigation has been handed over to the police’s financial crimes investigation unit. Its investigators have been working around the clock, collecting testimonies from former Defense Minister Moshe Ya’alon and the various directors general of the Defense Ministry during the relevant time frame. Senior naval officers have also been subpoenaed to submit their testimonies. According to several reports, Ya’alon testified that Netanyahu was entangled in this scandal, too. He told the police that Netanyahu played an active role in efforts to rescind the international tender to procure four heavy corvette-class warships to protect Israel’s natural gas platforms. The question is whether the investigators will be able to prove this allegation.

Over the course of the probe, a series of ancillary scandals, no less intriguing and titillating than the original, keep popping up. So, for instance, Margalit’s report provides new details about a cyberbreach that affected the German shipbuilder’s computers two years ago. Margalit, who is considered one of the founding fathers of Israel’s cyber and high-tech industries, now claims that “a country with high cyber capabilities was behind the hack. Enormous amounts of information was taken from the German corporation.” He claims that the hackers intentionally inserted a computer worm into ThyssenKrupp’s computers to obtain classified information. According to Margalit, it is very likely that the information stolen from the corporation includes secrets involving the submarines that Israel has ordered — submarines considered by Israel as its utmost strategic weapon.

Margalit also attempted to prove an “Iranian connection” to the German corporation. Data that he presented after his own investigation support the claim that the Iranians have their own interests in ThyssenKrupp, extending far beyond their 5% controlling interest in the corporation. “This issue must be investigated fully,” Margalit said.

Although Netanyahu is not yet implicated directly in this scandal, legal sources have no doubt that the impact of the whole affair can be devastating. If a link to the prime minister is found, or if it is discovered that he knew about the activities of his personal attorney and family member Shimron, Netanyahu’s political career would come to an abrupt end. While we are not quite there yet, it cannot be discounted that this is the direction that the investigation is heading.

Attorney General Avichai Mandelblit is expected to announce that the current probe of the submarine procurement scandal will soon receive an official upgrade to full-fledged “investigation.” It is no longer possible to ignore the fact that Mickey Ganor, the intermediary “dropped” into these questionable dealings by unnamed factors; Brig. Gen. Avriel Bar-Yosef, a senior Israeli naval officer and the deputy head of the National Security Council, who brought Ganor in and is considered the “brains” behind the whole affair; and Netanyahu himself all live in the same neighborhood in the town of Caesarea. Police investigators are now considering whether they should pay a visit there, too.