Israelis deserve to know the truth about submarine scandal

A public watchdog has petitioned the Supreme Court in an effort to determine whether Prime Minister Benjamin Netanyahu was directly or indirectly complicit in causing grave damage to state security in a controversial submarine acquisition from Germany. 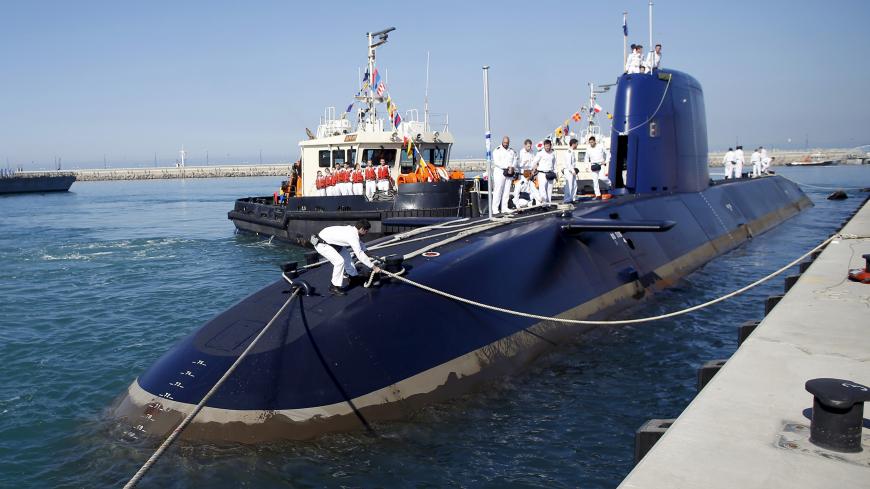 Israeli navy soldiers stand on the Rahav, the fifth submarine in the fleet, as it docks, Haifa, Israel, Jan. 12, 2016. - REUTERS/Baz Ratner

“I believe nothing will come of this,” Israeli Prime Minister Benjamin Netanyahu declared at a Dec. 31 news conference during a visit to Brazil. “This” is a reference to three affairs in which police suspect Netanyahu of corruption: Case 1000 involves gifts he allegedly received from wealthy businesspeople; in Case 2000 he allegedly conspired with a news publisher for favorable coverage; and in Case 4000 he is suspected of granting regulatory favors to a media tycoon, also in return for favorable coverage. Netanyahu added, "The hearing doesn’t end until my side is heard. And therefore, it is not logical to open a hearing process before elections if you can’t finish it before elections.”

Attorney General Avichai Mandelblit reportedly promised members of a senior judiciary forum recently that he would make an all-out effort to complete studying the police findings and recommendations in all three cases as quickly as possible in order to decide whether to indict Netanyahu, pending a hearing. According to a Jan. 1 report on Channel 2, Mandelblit agreed that issuing a decision prior to the elections was a “public duty” so that voters can go to the polls fully informed.

However, no mention has been made of why Mandelblit allowed Netanyahu to evade a criminal probe into a far more serious case — Case 3000.

Case 3000 stems from a contract estimated at $2 billion that Israel awarded the German industrial giant ThyssenKrupp in 2016 for the purchase of three submarines and four warships. Police have recommended indicting several senior figures in the affair on suspicion of accepting bribes, money laundering and other crimes. A petition submitted Dec. 18 to the Supreme Court by a public watchdog is demanding that the attorney general, the state prosecutor, the head of investigations at the Israeli Police and the prime minister himself provide answers to a series of tough question emanating from the affair by Jan. 6. The petitioners represent the Movement for Public Integrity, a nonprofit organization dedicated to fighting public corruption that includes among its leading figures Brig. Gen. Yaakov Or, who headed the Defense Division in the State Comptroller’s Office and previously served as the Coordinator of Government Activities in the Territories. Another leading activist was Shlomo Gur, the attorney who served as director general of the State Comptroller’s Office and before that of the Justice Ministry.

The petition presented by Attorney Avigdor Feldman and the movement’s current legal adviser Yuval Yoaz argues that the police questioned Netanyahu under caution in the other suspected corruption affairs, and recommended indicting him on charges of bribery and breach of trust. These charges, according to the petitioners, were “nothing compared to the suspicions” emerging from investigations in Case 3000 that are so severe that "they obscure the eye of the sun."

The movement further claims that the conduct of Mandelblit and State Prosecutor Shai Nitzan in this affair was incompatible with the standards of public probity and administrative and criminal law. The “de facto immunity” that they granted Netanyahu from the start of the affair diverted the investigation from its due course, the petitioners allege.

“The mind refuses to understand,” the petitioners argue, how the state could determine from the start that Netanyahu was not a suspect in the case — even before the investigation, before one of those involved turned a state’s witness and before extensive evidence was gathered. “Can this suspicion be left to hang over the head of the prime minister and of the voters who believe in him and trust him to place the security of the state and its residents above all other considerations?” the petitioners ask.

And there is more. Much like other large weapon deals by Israel, the submarine deal with ThyssenKrupp included an exclusivity clause, hindering the company from selling the same technology to Israel’s neighboring countries. Still, the company agreed to sell similar submarines to Egypt. The petitioners allege that Attorney Yitzhak Molcho, Netanyahu’s private special emissary, was the one who probably agreed the German government could sell these advanced submarines to Egypt, in coordination with Israel’s National Security Council but unbeknownst to the minister of defense, the security Cabinet and the army, which had previously objected to such a deal.

Then-Defense Minister Moshe Ya’alon has dubbed the affair “an act verging on treason," and accused “corrupt officials” of pushing the deal for profit even though Israel had no need for the submarines. Israel’s approval of the sale to Egypt emerged by chance when German Chancellor Angela Merkel told Israeli President Reuven Rivlin about it on his visit to Germany in May 2015. Although the prime minister was the only one authorized to approve a trip by Molcho to Germany with such a letter lifting Israel’s opposition to the sale to Egypt, police did not question him about it under caution. Police did not question the president nor did it follow up further with Merkel's office, according to the petition.

The petitioners are asking the Supreme Court to instruct the state prosecution and the police to investigate Netanyahu under caution regarding the deal for the submarines and the warships allegedly needed to protect Israel’s gas exploration rigs.

According to the indictments against the suspects, the specifications of the vessels were tailored to the capabilities of ThyssenKrupp and designed to enrich the “corrupt group” of Israelis. The petitioners base their arguments, among other things, on statements by Ya’alon and another former defense minister, Ehud Barak, who argue that it is “unrealistic” to believe Netanyahu was unaware of “the criminal decisions made within the framework of the criminal conspiracy exposed in this affair.”

The suit also alleges that Netanyahu was deeply involved in the deals with Germany, in some of which he was even the lead figure, for example in his contacts with Merkel. The petition demands that Mandelblit and Nitzan as well as Netanyahu himself respond to the question of how the prime minister failed to see the corruption and criminality of the deals. “How could he not discern that in his home, in his office, by the closest of his associates deeds were being carried out in contrast to which every other criminal investigation pales?” the petitioners asked.

The petitioners noted that three of the six suspected of profiteering from “selling the security of the state” are members of Netanyahu’s inner circle. Netanyahu appointed one of them, Brig. Gen. (Res.) Avriel Bar-Yosef, as deputy head of the National Security Council and entrusted him with the state’s top secrets. Another suspect, Attorney David Shimron, was entrusted with Netanyahu’s top secrets, having served as his personal lawyer. The petitioners ask whether, as the probe advanced, investigators should not have addressed suspicions that the prime minister not only chose to ignore his close associates’ actions but also aided and abetted them?

“The submarine issue is sunk,” Netanyahu declared in November following the indictments against his associates, accusing the media of allegedly “making supreme efforts to tie me to an issue to which I have no connection.”

The Movement for Public Integrity, led by first-class jurists and auditors, is making an effort to rescue Case 3000 from the depths and to float the following question: Was the prime minister a party, directly or indirectly, to gravely harming state security?

That is the question before the highest court in the country. Israeli voters deserve an answer.