Netanyahu off the hook on submarine affair

Prime Minister Benjamin Netanyahu can breathe easier now that the attorney general has decided not to investigate him in the submarine affair nor in the stock-share dealing case. 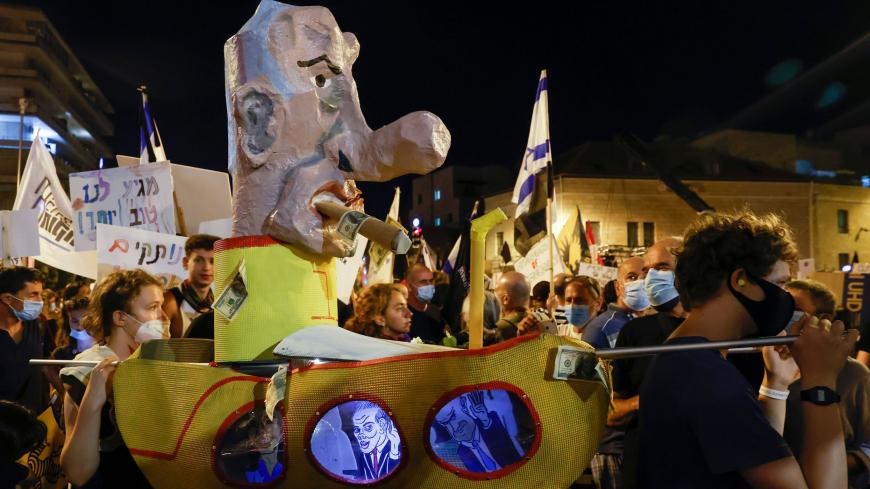 Israeli protesters lift a model of a submarine topped with a representation of Prime Minister Benjamin Netanyahu during an anti-government demonstration in front of the prime minister's residence in Jerusalem, on Aug. 15, 2020. - JACK GUEZ/AFP via Getty Images

Prime Minister Benjamin Netanyahu should have been able to relax after Attorney General Avichai Mandelblit announced Oct. 15 that he would not order a criminal investigation into his stock dealings and explained once again why he would not indict him in the submarine affair.

The first incident involves a stock purchase that netted Netanyahu a hefty return when he sold the shares back to his American millionaire cousin Nathan Milikowsky. The second relates to Israel’s purchase of submarines and warships from German steelmaker Thyssenkrupp.

The two affairs continue to dog Netanyahu in the protest movement emerging against his conduct and continued hold on power. A petition submitted to the Supreme Court includes affidavits from senior former defense officials. Netanyahu’s senior government partner and Defense Minister Benny Gantz announced Oct. 15 that he was considering a commission of inquiry within the Defense Ministry to delve into the submarine affair involving billion-dollar defense acquisitions from the German company. Gantz, himself a former military chief who used the submarine affair to goad Netanyahu in three recent election campaigns, is now trying to use it to force the prime minister's hand on other issues, such as presenting and approving the state budget and appointing a state prosecutor and a national police chief.

The submarine affair could prove to be the riskiest one for Netanyahu. Its potential for political fallout for him is enormous. The three indictments that Mandelblit filed against Netanyahu in January 2020, including for bribery, did not dent support for the prime minister among his followers, who were unimpressed by accusations of illicit gifts and attempts to take control of the Israeli media. However, the submarine affair was an entirely different opera. Netanyahu knew that if he were accused of exploiting defense procurement for gain for himself or his associates, even his most ardent supporters would abandon him.

Luckily for Netanyahu, Mandelblit exonerated him, saying from the start of the investigation that he was not a suspect even when police recommended indicting some of his associates and relatives.

Netanyahu must breathed a sigh of relief then, and again this week. Still, he cannot relax. Many Israelis feel cheated in this affair, prompting a wave of protests that culminated this week when a long convoy of cars and trucks carrying cardboard mockups of submarines gathered from northern and southern Israel and converged in Jerusalem. The Movement for Quality Government in Israel has petitioned the Supreme Court demanding that Netanyahu be questioned in the case, which also involves Israeli agreement for Germany to sell submarines to Egypt. Dozens of shocking affidavits by senior defense establishment officials were appended to the petition. Reserve generals, senior officers and people involved in the submarine acquisition described in detail heavy pressure exerted by the prime minister’s office to buy the vessels from Thyssenkrupp and to scrap an international tender for the purchase of large naval patrol boats and buy them directly from the same conglomerate instead.

The Supreme Court will deliberate on the petition this month. On Oct. 15, Mandelblit presented his response to the petition, explaining why Netanyahu had not been charged. Mandelblit also announced that he would not probe Netanyahu’s $600,000 stock purchase from SeaDrift, a steelmaker controlled by Milikowsky (which apparently also supplies some products to Thyssenkrupp). Netanyahu sold the stock at a huge profit despite the company’s failing performance.

While Mandelblit conceded that Netanyahu benefited significantly from the Milikowsky transaction, he also claimed that there was an insufficient evidentiary basis for a criminal investigation. He concluded that Netanyahu was unaware of the conflict of interest and that the stock sale constituted a forbidden benefit.

The attorney general's decisions have prompted harsh public criticism on the part of Netanyahu's opponents, but also tremendous public glee from his supporters. Mandelblit himself was at the center of a new scandal that erupted this week involving secret recordings of conversations he conducted a few years ago with the powerful head of the Israel Bar Association, Efi Nave, who has since been forced to resign and has been indicted on charges of fraud and influence peddling.

Netanyahu’s people have been conducting a concerted campaign in recent months against Mandelblit’s credibility in an effort to prove that the indictments filed against the prime minister were politically motivated or that he was blackmailed by former State Prosecutor Shai Nitzan into framing Netanyahu. While all these conspiracy theories are clumsy, they are further unsettling Israel. The attorney general is in the eye of a perfect storm, with half the Israeli public convinced he has framed Netanyahu to unseat him and the other half that he is actually in cahoots with Netanyahu and his plots, as proven by his decision this week to drop the significant investigations and stop with the indictments on negligible charges that will not suffice to send him to jail.

The Netanyahu era is much closer to its end than its beginning, most of his acolytes would agree. It is already clear that once Netanyahu descends from the political stage, the state will have to rehabilitate the ruins he left of the institutions of state.

For now, Netanyahu can breathe easy on the submarine front. Had he been indicted in that affair, his name would have been tainted forever as a traitor and his legacy besmirched. As long as he manages to distance himself from it, Netanyahu can continue to fight for his place in history and also for the prime minister’s seat, which he has no intention of giving up.