Israel’s opposition lawmakers are furious over Knesset speaker Yuli Edelstein's decision to nullify a vote to probe the prime minister in the notorious submarine affair. 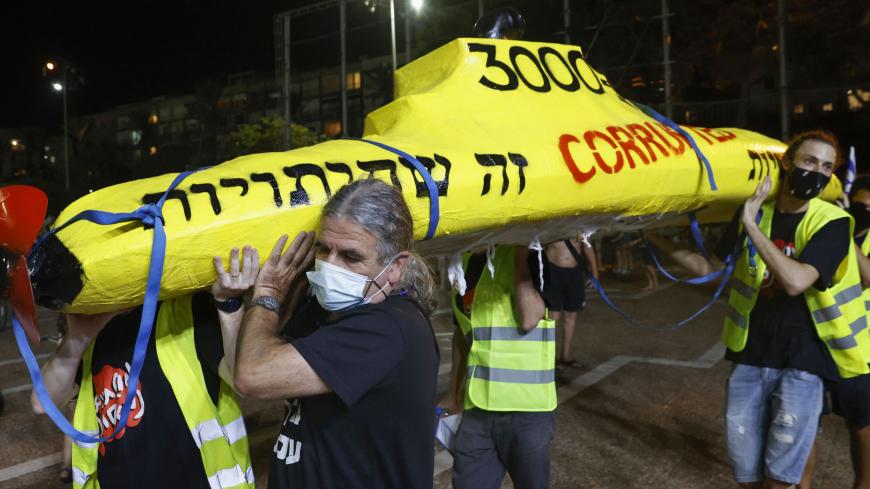 Israeli protesters wearing protective masks due to the COVID-19 pandemic carry a mock submarine during a demonstration against Prime Minister Benjamin Netanyahu in Tel Aviv, on Oct. 17, 2020. - JACK GUEZ/AFP via Getty Images

Knesset speaker Yariv Levin nullifed the results of a vote on forming a parliamentary inquiry into a major corruption scandal known as the submarine affair, provoking strong condemnation from opposition lawmakers. After the decision, Prime Minister Benjamin Netanyahu ordered another vote be held, but the opposition decided to boycott the second vote, and the proposal was rejected.

Proposals to probe the submarine affair have surfaced more than once. Several associates of Netanyahu have been investigated in relation to the affair, which concerns Israel's purchase of submarines and war ships from German steelmaker ThyssenKrupp. Some of those investigated had already been indicted for corruption and bribery in the affair dubbed Case 3,000, including Netanyahu’s personal lawyer and cousin David Shimron.

Attorney General Avichai Mandelblit stressed on more than one occasion that Netanyahu was not considered a suspect. The state prosecution said as much again last Sunday, telling the High Court it believes there was not sufficient justification for opening a criminal probe against Netanyahu in that affair or in another concerning stock trades.

That being said, many in Israel feel that investigation did not go deep enough into Netanyahu's links to the scandal. On Oct. 13, hundreds of protesters formed vehicle convoys from the south and the north of Israel toward Jerusalem, their cars bearing makeshift submarines.

The proposal brought up at the Knesset today was sponsored by leftist Meretz Knesset member Tamar Zandberg, with the backing of the Yesh Atid-Telem Party. It was meant to provoke and embarrass Blue and White Party leader and Defense Minister Benny Gantz, who had expressed support for further investigating the matter. Still, Gantz made it clear that his party would not support the proposal.

In a surprise turn, the proposal won the support of 25 lawmakers. Shortly after, Levin nullified the vote, explaining that coalition whip Miki Zohar had demanded a voice rather than an electronic vote. Levin also said that some parliamentarians, himself included, had missed the announcement that the vote was starting and thus did not press the button to express their choices.

Levin’s decision sparked an uproar. Knesset members from the opposition cried, "Shame, shame." Opposition leader Yair Lapid announced after the session that the cancelation of the vote foretells the cancellation of future rulings by the court. "Whoever nullifies Israel’s democracy like that has crossed all red lines. The government did it because it was about the submarine affair. Netanyahu knew exactly what he was doing. He knew exactly why he was stopping a meeting of the coronavirus cabinet: to block a proposal related to his corruption affair."