Prime Minister Benjamin Netanyahu was not indicted in the submarine affair, but many Israelis are demanding that the case be further investigated. 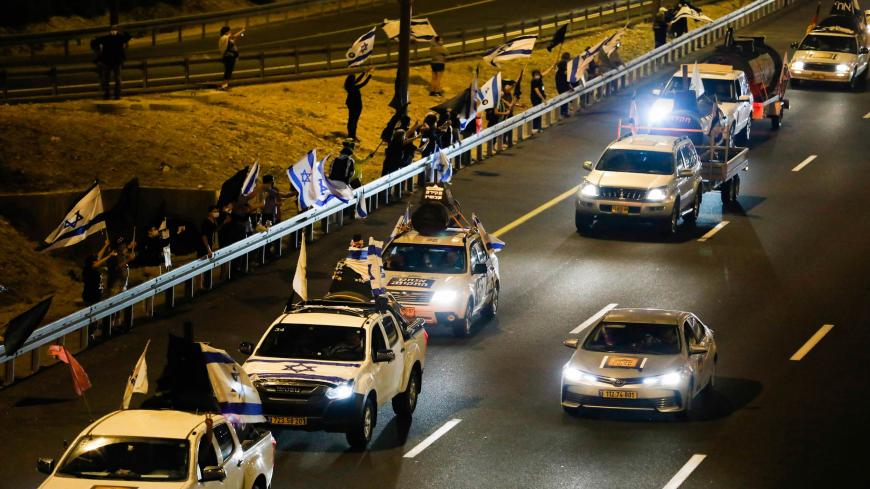 Drivers on the highway leading to Jerusalem wave Israeli national flags as they protest against the prime minister and against the second nationwide lockdown imposed by the government in a bid to stem the increase of coronavirus infection cases, at the entrance of Jerusalem, Oct. 14, 2020. - AHMAD GHARABLI/AFP via Getty Images

An unusual demonstration took place outside Israel’s High Court on Oct. 13. Hundreds of protesters gathered there, most of them in cars carrying makeshift submarines on top of their vehicles. They drove to Jerusalem in convoys from the north and from the south of the country, calling on the authorities to investigate Prime Minister Benjamin Netanyahu over a scandal surrounding a $2 billion submarine deal Israel had signed with Germany a few years ago. All in all, about 70 such homemade submarines were staged in Jerusalem, accompanied by black flags, the symbol of the anti-Netanyahu movement.

The two convoys — one from Kiryat Shmona in the north and the other from Beersheba in the south — drew much public and media attention. Hundreds of people came out to stand along the routes of the convoys, to express their support. The convoy that started its journey in the north made a first stop in Haifa and then a second stop in Caesarea, near the private residence of Netanyahu, where at least 1,000 protesters rallied. Light airplanes also participated, hovering over the rally. Well-known writer Meir Shalev was one of the key speakers in Caesarea, saying, "Netanyahu loves submarines. They go well with his character. Deep under water and hidden. Today we forced his submarines out of the water."

But that was not all, while the convoys were making their way to Jerusalem, several other gatherings took place, with the same goal. A flotilla protest was launched on the Jordan River, with makeshift submarines and people on small boats. Another demonstration was staged near Kibbutz Ga’ash.

En route to Jerusalem convoys joined in Tel Aviv. "This has been an amazing demonstration day, perhaps the largest and most creative one ever staged in Israel. Almost 100 makeshift submarines traveled from the north and from the south through Tel Aviv to Jerusalem. Along the way they were joined by thousands of other vehicles and a huge crowd awaited them along the route. A sort of a puzzle of 'a demonstration each junction,' all the way to the central rally in front of the High Court," tweeted the submarinegate group.

The submarine scandal involves many high-ranking past and present people from the Israeli defense system and also people close to Netanyahu. Police suspects bribery in two deals between Israel and German shipyard ThyssenKrupp for the purchase of submarines and missile-equipped boats.

In November 2019, Attorney General Avichai Mandelblit decided to indict Netanyahu in three cases for bribery, fraud and breach of trust (cases 1000, 2000 and 4000), but not to indict him in the submarine affair (dubbed Case 3000). In fact, already when investigation into the submarine affair started some five years ago, Mandelblit said that Netanyahu was not a suspect. Mandelblit did indict a close confident of Netanyahu — his personal lawyer David Shimron.

Last June, the Movement for Quality Government in Israel petitioned against that decision not to indict Netanyahu. Yesterday, the state asked to keep confidential affidavits in that affair, made by people who work or worked in the defense system. The court is expected to start debating that this afternoon. On Oct. 12, Israeli press published a leaked testimony provided by former Defense Ministry Director General Dan Harel that allegedly ties Netanyahu to the scandal.