Even after being recommended for indictment in two affairs, Israeli Prime Minister Benjamin Netanyahu is far from abandoning the battle. 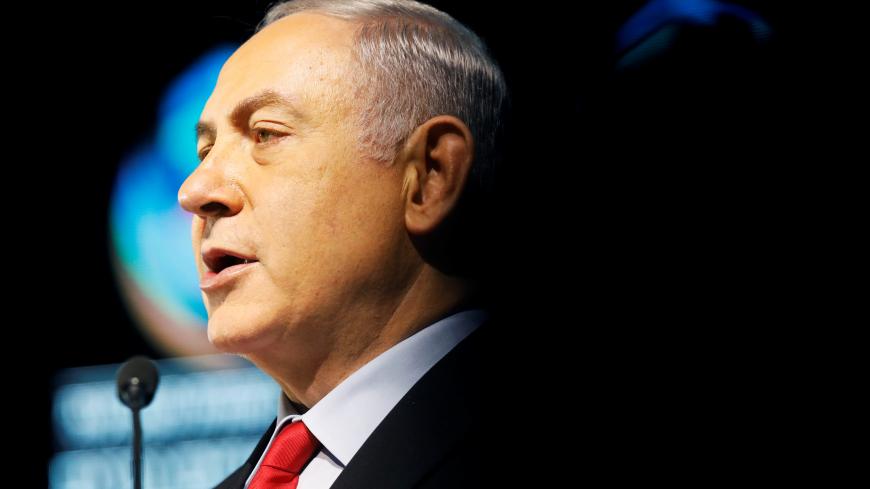 Since the 1990s, every prime minister of Israel has been entangled in a criminal investigation of one kind or another. It happened to Benjamin Netanyahu during his first term, and it happened to Ehud Barak, Ariel Sharon and Ehud Olmert (who served time in prison), and now to Netanyahu for a second time. It is the first time in the history of Israel, however, that the police have recommended indicting a sitting prime minister for bribery.

The recommendations by the police on Feb. 13 kicked off a political earthquake, rocking Israel’s political and legal systems. Netanyahu has yet to be deposed. The last word must come from Attorney General Avichai Mandelblit. Nevertheless, Netanyahu has become a lame duck. Going forward, the slightest injury could end Netanyahu's political career. Olmert found himself in the same situation right after the Second Lebanon War, in 2006. Right now, the keys to Netanyahu’s political survival lie with Finance Minister Moshe Kahlon. Everything will come to an end once the finance minister decides that holding on to them is more painful than the thought of cutting his successful tenure short over the Netanyahu investigations. It might never happen, but it could also come about much quicker than Netanyahu imagines.

According to Israeli law, a prime minister is not required to resign after the police recommend indictment. Netanyahu would not even be required to resign if the attorney general decides to indict. In theory, Netanyahu could remain in power until he is convicted, although it is unlikely to happen. If it did occur, it would be a first in Israeli history. The Supreme Court has already ruled that other ministers must resign when indicted.

Kahlon has already announced that if the attorney general decides on indictment, Netanyahu will have to go. Mandelblit's decision could take many months, but Israelis remember how political pressure forced Olmert to resign long before the police even submitted their recommendations.

Pressure will continue from the Israeli public, as one group or another demonstrates every Saturday night, the polls and the other coalition partners. Netanyahu's position is soon likely to further deteriorate, as he has yet to face the submarine scandal, and he is expected to be interrogated in the Bezeq telecommunication company scandal, in which his close confidant Shlomo Filber is already up to his neck. In the coming days, Netanyahu’s situation could appear hopeless.

At the same time, it should be remembered that Netanyahu is the ultimate “comeback kid” of Israeli politics. The man has been eulogized and buried on more than one occasion, but he has always returned to mock his rivals. He has survived and gone on to serve as prime minister for more than 12 years in total.

The police recommendations surprised many. That the police also recommended that Milchan be indicted for bribery shocked Netanyahu's confidant and his legal team and made it quite clear that Israeli law enforcement takes what happened between Netanyahu and Milchan over the past decade very seriously. Investigators found that Milchan had been giving gifts to Netanyahu for more than a decade and that the frequency of these gifts increased after Netanyahu returned to the prime minister’s office in 2009. Milchan provided him with champagne, cigars, jewelry, clothes and many other valuable items, all at the demand of the Netanyahu family and hidden in sealed black bags at the request of Netanyahu's wife, Sara. The police determined that the relationship between Netanyahu and Milchan was not one of friendship and that the kinds of gifts exchanged were not the kinds exchanged between friends.

No less surprising were the recommendations in Case 2000, the popular moniker for the covert relationship between Netanyahu and the influential publisher of Yedioth Ahronoth. The police compiled evidence that conversations between the two men went beyond mere talk about a shady deal in which Netanyahu would limit distribution of Israel HaYom — the free Israeli newspaper owned by American mogul Sheldon Adelson that competes with that of the Yedioth group — and in exchange receive favorable coverage by the group’s media outlets. Both Netanyahu and Mozes began to assess the feasibility of such a deal, investigators concluded. Furthermore, Netanyahu is suspected of asking Knesset members close to him to tone down their resistance to a law initiated by opposition lawmakers intended to limit the free paper’s influence.

That the police recommended indicting both Netanyahu and Mozes made waves in the Israeli media world as well. Nevertheless, the attorney general is likely wary of pursuing this affair, as it would mean entering the minefield that is the relationship between Israeli politicians and the media. It could open all sorts of Pandora’s boxes, which no one in Israel wants.

Thus far, Netanyahu has been able to rally the Likud behind him. No one in the ruling party is willing to come out against him. To the contrary, they are attacking the police, the legal system, the media and even Yesh Atid leader Yair Lapid, who served as finance minister in Netanyahu’s previous government. Lapid will be a key witness against the prime minister if Netanyahu goes to trial. He has already testified that Netanyahu asked him to extend the so-called Milchan law, which offers Israelis who left the country the possibility of a 10-year exemption from taxes and reporting on their assets when they return. The law was worth millions to Milchan, and Netanyahu’s involvement provides a basis for a charge of bribery. Lapid is Netanyahu’s political rival and the main candidate to replace him. His prominent role in the Netanyahu saga has turned this affair into a real soap opera, and episode one has just concluded.