Attorney General Avichai Mandelblit has apparently decided to convict Prime Minister Benjamin Netanyahu in two cases and must now decide about a third — all while facing an orchestrated campaign by Netanyahu against him. 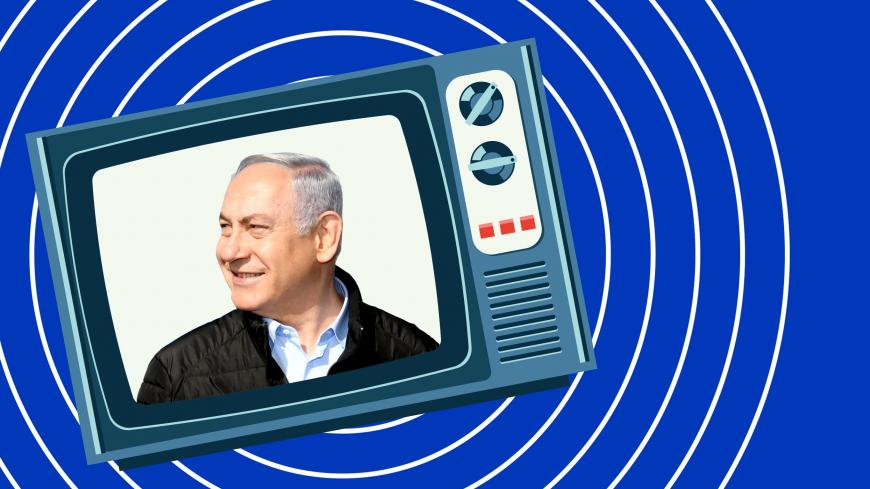 Prime Minister Benjamin Netanyahu has launched a Facebook television channel in a bid to fortify his constituency ahead of the critical decision by Attorney General Avichai Mandelblit regarding his possible indictment. Not that Netanyahu lacks media outlets under his control. He has a freebie newspaper with a circulation in the hundreds of thousands (Israel Hayom), a TV station wholly dedicated to right-wing propaganda and Netanyahu support (Channel 20), and he has a loyal cadre of so-called “journalists” — some wholly lacking in skills or experience — in major media outlets. All ensure that his messages resonate clearly on all available platforms.

Netanyahu, however, wants more. Like his patron, Donald Trump, he can never get enough favorable coverage and flattery. Even if all the real journalists in Israel are silenced, Netanyahu will continue to feel persecuted.

On Feb. 2, Netanyahu’s Likud party launched its own online television channel from its historic Metzudat Ze’ev headquarters in Tel Aviv. BB-TV, as it has come to be known (the acronym is based on Netanyahu’s nickname, Bibi), includes a nightly “news” webcast anchored by a popular reality television survivor with no journalism experience, Eliraz Sade. The point of the webcast, says Netanyahu, is to wipe out the “fake news” industry directed by Israeli media against him. In fact, BB-TV is the ultimate in fake news. Netanyahu himself is the regular guest almost every evening. Obviously, he does not have to field hardball questions, only softball ones at which he is known to excel.

Netanyahu’s private label webcast is his latest weapon in the campaign against Mandelblit, who has already said he would announce his decision on whether to indict Netanyahu on corruption charges before the April 9 elections, making the coming weeks the most critical for Israeli politics in a very long time. Justice Ministry sources say Mandelblit intends to issue his announcement prior to the Feb. 21 deadline for submitting the names of all candidates running in the elections, meaning within the coming 10 days.

Mandelblit appears to have decided to indict Netanyahu on charges stemming from two of the three criminal probes against him. In Case 4000, Mandelblit is leaning toward a charge of bribery over Netanyahu’s alleged quid-pro-quo relationship with former media and telecom tycoon Shaul Elovitz. In Case 1000, involving gifts Netanyahu received from Hollywood mega-producer Arnon Milchan, Mandelblit is expected to opt for lesser charges of fraud and breach of trust, although the police recommended a charge of bribery. The remaining case, Case 2000, is a particularly explosive time bomb starring, in addition to Netanyahu, Israel’s most powerful news publisher, Arnon Mozes, owner of the mass-circulation daily Yedioth Ahronoth and the top Israeli news website Ynet.

Most of Mandelblit’s advisers and deputies believe Case 2000 is a bribery affair of tremendous public importance. A minority within his team caution against intervening in the sensitive and explosive domain of relations between politicians and the media. Mandelblit himself is leaning toward indictment but is still grappling with this understandably tough decision. Indicting Netanyahu would almost automatically entail indicting Mozes, which is the last thing Mandelblit needs right now. It would pit him not only against Netanyahu and his followers but against the powerful Yedioth Ahronoth Group. Case 2000 is a ticking time bomb on the attorney general's desk. Almost any decision he makes will generate an unprecedented flood of criticism, and he knows it.

The case appears to have solid evidentiary grounding based on recordings of a series of secret meetings between Netanyahu and Mozes during which the two allegedly conspired to carry out what appears to be a classic bribery deal. The alleged deal would have had the Yedioth media outlets scale down their criticism of the prime minister and soften their overall hostile line against him, enabling his re-election. The group’s editorial line is the sole prerogative of its publisher, and he is heard on tape promising a shift — although he also warned that he would be unable to influence what his top columnists write. Netanyahu, for his part, promised to try to curb the distribution of Yedioth’s main circulation rival, Israel Hayom, and perhaps even shut down its weekend edition, which is still the main financial anchor of Israel’s dying print newspaper industry. For Mozes, such a move would be worth hundreds of millions of shekels in revenue. For Netanyahu, a halt to Yedioth’s attacks would be worth a similar sum, perhaps more.

The evidence is not limited to these recorded meetings. The police and prosecution know of a series of further checks by the sides, mainly Netanyahu, in an effort to move ahead with the corrupt deal. From a simple evidentiary point of view, the prospects of obtaining a conviction in this case are quite high. In other words, from a purely professional point of view, this is not a tough dilemma.

The dilemma lies in the realm of the media and the public. Is it right to delve into the heart of relationships between the media and politicians? Will a decision to indict in this case not open a Pandora’s box that would destroy what is left of public trust in politicians and the media? What’s more, an indictment would raise questions about another case that was never investigated: the relationship between Netanyahu and Israel Hayom, owned by his American benefactor, Sheldon Adelson.

People at Yedioth argue that an indictment would constitute outrageous discrimination against the media group, given the relationship between Netanyahu and its rival, Israel Hayom. The paper, they argue, has been distributed without charge since 2007 with the sole goal of extolling and glorifying the prime minister. What he received is clear, but what did he give in return, they ask. He has admitted, they say, that he called snap elections in 2015 because of a proposed bill to curtail the paper’s free distribution. In other words, he took a dramatic measure (calling elections) only in order to help his court newspaper. They are asking why Mandelblit did not order an investigation into this affair too, as he did into the relationship between Netanyahu and Mozes.

True, there are no recordings attesting to the Netanyahu-Adelson ties. Does this vitiate the need for an inquiry? Netanyahu has also accused the chair of the Yesh Atid party, Yair Lapid, of holding a series of secret meetings with Mozes. Should these not be probed? Investigations into all of these relationships would produce a poisonous brew. The claims against Lapid lack any proof, but this does not prevent Netanyahu from creating a false impression as if he is the only one under investigation. Either way, this poisonous brew is currently on the desk of the attorney general, ready to be drunk. Cheers to us all.