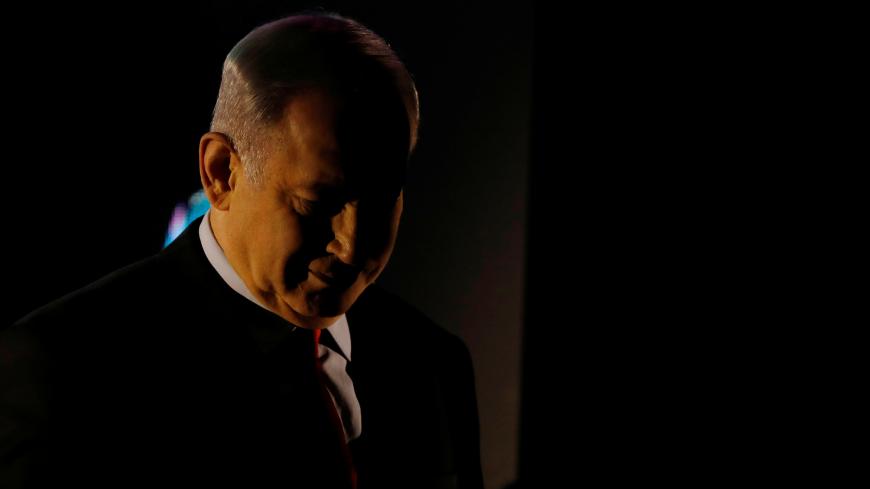 Associates of Benjamin Netanyahu keep repeating the talking points that as long as the Israeli prime minister has not been indicted and nor proven guilty, he enjoys the presumption of innocence. Indeed, only Attorney General Avichai Mandelblit can decide whether to translate the police findings that Netanyahu accepted bribes into an indictment. However, even if Mandelblit decides to trash the results of the police investigations, he will be unable to deodorize the stench they give off. That odor will not be cleared even if the court accepts Netanyahu's version that constant supplies of champagne, cigars and jewelry from wealthy businessmen estimated at 1 million shekels ($288,000) were simply gifts from close friends.

Police recommended the indictment of Netanyahu in two cases: Case 1000 for allegedly receiving bribes from businesspeople, and Case 2000 for allegedly plotting a deal with Yedioth Ahronoth publisher Arnon Mozes for positive coverage. Police also continue to investigate alleged wrongdoing involving the Bezeq communication company in Case 4000. But revelations about these files also expose another serious dimension: the Likud Party leader's plan to take control of Israel's media, culture and information. In essence, the really major gifts Netanyahu demanded from his wealthy benefactors, a few of which he managed to receive, were in fact paths to the hearts and minds of Israel's voters. The cigar smoke and alcohol fumes blur his plot to dismantle the central pillars of Israel's democracy — freedom of information and expression, an independent media and a combative press.

Let's assume, as Netanyahu claims, that the steady supply of presents bestowed by Israeli billionaire Arnon Milchan were the type of gifts people give their friends. We are still left with the police conclusions that the prime minister acted to promote Milchan's holdings in the merger of Israel's two leading television franchises, Reshet and Keshet. Gaining entry for a friend into a major media outlet improves the prospects of gaining entry for a few other friends into the Knesset.

Netanyahu and his lawyers rebuff police claims that the relationship with Milchan was one of bribery by saying that on the eve of the 2015 elections, the prime minister was trying to shut down another major news outlet, Channel 10, partly owned by Milchan. In fact, the effort to silence Channel 10 stemmed from Netanyahu's desire to get rid of its leading investigative reporter, Raviv Drucker, who exposed a series of affairs involving corruption, with Netanyahu in the leading role. Netanyahu was reportedly furious at former Attorney General Yehuda Weinstein for blocking the Channel 10 move; the prime minister lashed out at Weinstein, "I will lose the elections because of you."

In his bid to assume control of Israeli public opinion, Netanyahu talked to his friend Sheldon Adelson, the American casino mogul, about establishing a freebie newspaper, Israel Hayom, which has consistently touted a pro-Netanyahu line for more than a decade. Netanyahu then went about turning the rival mass circulation Yedioth Ahronoth newspaper and its popular website, Ynet, from foe to friend. In addition to allegedly plotting with its publisher Arnon Mozes to obtain favorable coverage in return for curbing the circulation of Israel Hayom, Netanyahu also sought to line up investors who could buy out Mozes. Another friend of Netanyahu's, Shaul Elovitz, a leading figure in the ongoing Case 4000 investigation, reportedly ensured flattering coverage for the scandal-ridden Netanyahu family on the Walla news site he owns.

Netanyahu left the takeover of the Kan public broadcasting channel, with its poor ratings, to two sidekicks — Culture Minister Miri Regev and Communications Minister Ayoub Kara. How can one forget Regev's outrageous complaint in July 2016 against having a public broadcasting channel the government cannot control. "We shell out the money and they broadcast whatever they want?" the scandalized minister asked. In recent weeks, Regev has also been engaging in efforts to prevent the screening on public television of a documentary by our Al-Monitor colleague Shlomi Eldar titled "Foreign Land." The film, winner of best documentary film prize at the Haifa Film Festival, features three men who despaired of living in current-day Israel and moved away. "We cannot have a public channel providing a stage for a film that sullies Israel's name,” said Regev, the former chief military censor entrusted by Netanyahu with the culture portfolio. Responding to Regev, Eldar said, "Anyone who fears a camera, fears the truth."

Netanyahu dispatched Regev to do to the world of Israeli culture what he himself is doing to the world of Israeli media: To reward movie, theater and music artists who toe the line and to undermine the livelihood of those critical of the political right. This week both of them ordered Israel's ambassador to France, Aliza Bin-Noun, to boycott the opening of the Israeli film festival scheduled to take place in Paris next month. Their ire was directed at the planned opening night screening of "Foxtrot," the critically acclaimed film that includes a minor imaginary scene reflecting the ugly face of Israel's occupation of Palestinian territory. Festival director Helene Schoumann told Haaretz that the festival presents works of arts and its considerations are not political. "It seems this minister doesn't like art that much," she added. Schoumann is wrong. The problem is not with the minister, nor with her attitude toward art. It lies in the office of the prime minister and with the dislike of Regev's "great leader" of anyone who does not belong to the anti-liberal right-wing camp.

Netanyahu's Feb. 13 meeting with Hungary's national security and foreign affairs adviser Jozsef Czukor several hours before the police issued their recommendations against him was highly symbolic. They discussed the possibility of Israel hosting the next summit of the Visegrad group comprising the Czech Republic, Hungary, Poland and Slovakia.

On Feb. 10, the New York Times ran an extensive write-up about the state of democracy in Hungary. The Netanyahu family counts Hungarian Prime Minister Viktor Orban among its friends. The two have an imaginary enemy in common — liberal Jewish-Hungarian billionaire George Soros.

The Times headlined its piece, "As West Fears the Rise of Autocrats, Hungary Shows What's Possible." It describes how Orban, head of the rightist Fidesz party, went about crushing his country's democracy by pushing through laws enabling the persecution of journalists who publish exposes critical of the government. Political propagandists were sent to replace veteran journalists at Hungary's public radio. "All the characteristics and features on the surface are of democracy," said Zoltan Illes, a former Fidesz lawmaker who has become a critic of the government. "But behind it there is only one party and only one truth." In Israel's case, one should paraphrase and say "one leader and his wife."