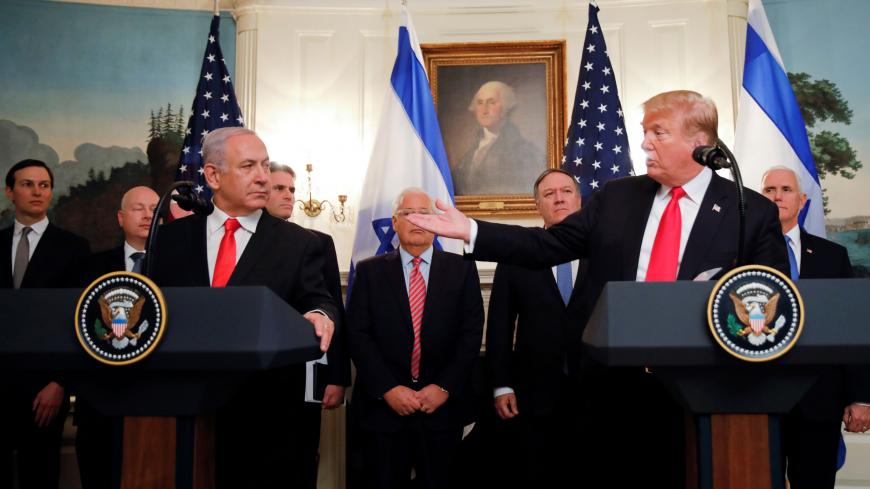 “If they understand how to make peace the way they understand the media, there will be no peace,” said a disappointed senior Israeli journalist on condition of anonymity, who like his colleagues failed to pass the “selection” by the US State Department and was not invited to cover the June 25 conference in Bahrain.

Up to the last minute, only a few Israeli journalists were invited to the opening conference for the presentation of the US administration’s Israeli-Palestinian peace plan. In fact, several days prior to the event, Israeli journalists were surprised to learn that some of them would not be allowed to cover the conference. After waging numerous battles against Prime Minister Benjamin Netanyahu over freedom and independence of the media — which he constantly belittles as “leftist” and “Bolshevik” — top Israeli journalists found out that America under Donald Trump is no longer the cradle of democracy.

About a week prior to the conference, top Israeli journalists covering diplomatic, political and economic affairs appealed as individuals and as a group to the State Department, US Ambassador to Israel David Friedman and even to President Trump’s Middle East envoy Jason Greenblatt, requesting accreditation. Six invitations only were granted: Yisrael Hayom newspaper owned by US casino owner and Republican mega donor Sheldon Adelson, Haaretz, The Jerusalem Post, Times of Israel, Channel 12 News and Channel 13 News.

Yedioth Ahronoth, a mass circulation tabloid that also owns the most widely read news website in Israel, Ynet, was not invited. Nor was Israel’s Public Broadcasting Corporation Kan and top business and financial affairs journalists, despite the fact that the Bahrain meeting was billed as an “economic workshop.”

The decision to boycott Yedioth Ahronoth cannot be delinked from the complex relationship between Netanyahu and Yedioth Group publisher Arnon Mozes, which resulted in a pending indictment of the prime minister known as Case 2000 focusing on suspicions that Netanyahu sought to obtain favorable coverage by offering Mozes a quid pro quo. The boycott of the public broadcaster should be considered in light of Netanyahu’s persistent efforts to shut it down or at least curb its news department. The fact that these two central outlets were not invited set off alarm bells among Israeli journalists who wondered whether the Trump administration might be “settling scores” with certain Israeli journalists.

Then came news that the Americans had denied access to Dana Weiss, the diplomatic affairs analyst of top-rated Channel 12 News. Instead, they invited her colleague Yonit Levi, the nightly news anchor considered well-connected to the US administration. In other words, the conference organizers not only refused to invite prominent Israeli media outlets, they also sought to control whom the outlets would send.

Channel 12 News directors were right in refusing to accept such dictates and telling the Americans they would not send a representative to Bahrain. Sources at Channel 12 told Yedioth Ahronoth that the White House had been displeased with several reports by Weiss, including her scoop on the transfer of the US Embassy to Jerusalem, and therefore had vetoed her attendance.

It then transpired that Weiss was not the only blacklisted journalist. So was Orly Azoulay, Yedioth’s veteran Washington correspondent. Azoulay, who holds US citizenship and had already traveled for the paper to Iran, bought a ticket to Bahrain in advance only to realize that her American passport was of no use and she was not welcome in the Gulf kingdom. The conference was held behind closed doors so that even if she were to arrive in Manama, she would not have been able to cover the event properly without accreditation.

“It’s sad to discover that this is the way the State Department is behaving,” she told Al-Monitor. She said that the Trump administration had a score to settle with her over her coverage of the White House in the past and present. Her employers have also decided not to send another reporter instead, and Azoulay said she is proud of the paper for doing so, rather than “giving in to dangerous American dictates intended to try and control the media.” Public broadcaster Kan, on the other hand, dispatched two reporters who hold foreign passports in hopes that they would be able to broadcast something from the conference to their viewers, US ire notwithstanding, even though they did not have accreditation.

“This whole conduct is strange and hard to explain,” Tal Schneider, political correspondent of the Globes financial newspaper, told Al-Monitor. Schneider said she had appealed several times to US administration officials. She noted the importance of having Israel’s most widely read financial newspaper, whose subscribers include heads of the country’s largest corporations, reporting with precision on the Bahrain economic workshop, but was turned down.

I, too, applied to US officials on behalf of Al-Monitor for permission to cover the conference in Bahrain and report to my readers, but I was also turned down. An American strategic communications firm hired by the organizers advised me, in an automated email reply, to watch the official YouTube channel of the conference and report based on what I see there.

What in fact were the parameters for issuing invitations to cover the conference? Who ruled out central Israeli outlets and leading journalists? “There is no doubt that elements in Israel influenced the Americans on this matter, especially David Friedman and Jason Greenblatt,” a senior journalist told Al-Monitor on condition of anonymity. The exclusion of Yedioth Ahronoth was hardly random and Sheldon Adelson’s fingerprints appear to be all over it, he said. Adelson, owner of the freebie Israel Hayom, a staunch Netanyahu supporter and business rival of the Yedioth Group, carries considerable weight with the Trump administration.

Of special relevance is the joyful tweet by Netanyahu’s son Yair after reports emerged that Weiss would not be invited to Bahrain. Some have speculated that Weiss was not invited after being heard vilifying Yair Netanyahu earlier this year. Although she apologized for her remarks, recorded without her knowledge, the animus remains.

For the Israeli media, the Bahrain conference serves as an important and frustrating lesson about the attitude of the world’s leading democratic power toward the media in the Trump era. And in that domain as well, Trump and Netanyahu probably share common language.