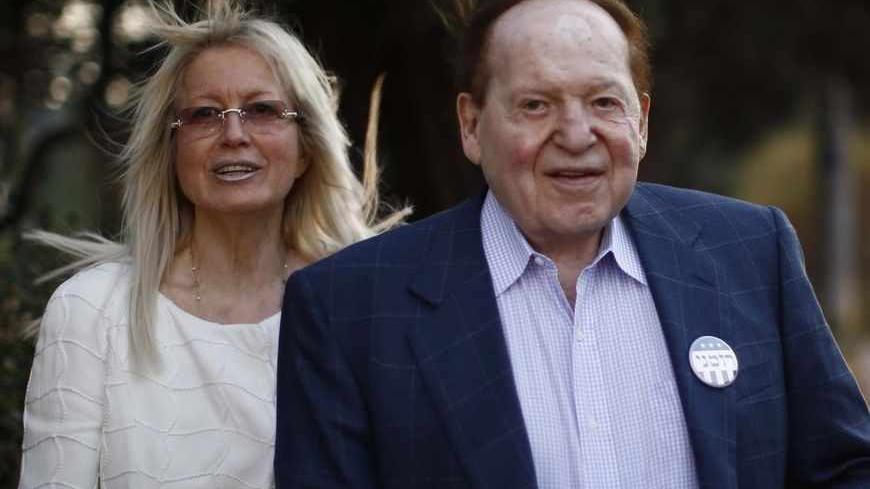 The intriguing meeting between the popular finance minister and the casino tycoon — who has a right-wing worldview and pulls the strings of Israeli and American politics alike — took place Saturday afternoon [April 27] in Adelson’s luxurious penthouse in a quiet North Tel Aviv neighborhood (a residence most familiar to Benjamin and Sara Netanyahu). It became known to Al-Monitor that Lapid paid a visit to Adelson’s apartment, accompanied by his spouse, Lihi, for an unofficial meeting with Sheldon and his spouse, Miriam.

The meeting lasted about two hours and was conducted in an intimate atmosphere. The content of the meeting remains a mystery, but we can ask ourselves a few questions about the very fact it took place, and its potential ramifications.

The first of them should mainly worry the prime minister and his spouse. Will this be the beginning of a lovely friendship between Adelson, the owner of the biggest-circulation newspaper in Israel, and Lapid, the politician on the fast track who intends to compete for the prime minister’s post in the next election?

Only recently, Lapid was included on the list of the 100 most influential people in the world in Time magazine — at Netanyahu’s expense, who had been on the list the two preceding years. Netanyahu had even adorned the magazine’s cover under the unforgettable headline, “King Bibi.” Does Adelson, who is strongly influenced by public opinion, think that he spots a “King Yair”? Is he trying to strengthen his relations with the finance minister, a rising star in the American media, who also received a personal and favorable nod from US President Barack Obama during the latter’s visit to Israel?

Anyone looking for a possible immediate effect of the “summit meeting” can find it in the news report that appeared on the Internet site of Israel Hayom yesterday afternoon [April 30]. The author described Lapid’s first appearance before the Finance Committee that approved the state budget, and did not skimp on the superlatives. The headline says, “Lapid scored a successful premier debut at the Finance Committee,” and the story’s lead says “he survived his first baptism by fire.”

Untll now, glorifying descriptions of this type in Israel Hayom were reserved in Israel for one person only — Benjamin Netanyahu.

And until recently, the front lines between Lapid and Israel Hayom-Adelson were tense to the point of being hostile.

First, Lapid had the most popular column in the Israeli daily Yedioth Ahronoth for years. The bitterness of the commercial and media war conducted between Israel Hayom and Yedioth cannot be exaggerated. In recent years, Yedioth lost its long-held position as Israel’s most widely disseminated paper to Adelson’s freebie. Harsh critical articles were published in Yedioth defaming Israel Hayom. These were accompanied by a smear-campaign and attempts to drive Adelson out of business via legislation, efforts led by Yedioth Ahronoth’s publisher, Arnon “Nuni“ Mozes. As a direct extension of this, Netanyahu also paid a price for his connections with Adelson and encountered a hostile system-wide attitude on the part of Yedioth Ahronoth. Netanyahu even claimed that the paper tried to bring him down. However, Israel Hayom fought back. When Lapid first entered politics, he (naturally) received a belittling reception on the part of Israel Hayom. “Lapid jumped too early,” one of the headlines wrote, “he will burn out.” The newspaper analysts also reckoned, mistakenly, that Lapid would not rake in voters from the right.

In October 2012, a column appeared by Israel Hayom's political analyst Motti Tochfeld, under the headline, “Yair Lapid’s Double Standard.” In the column, Tochfeld severely criticized the connection between Lapid and former Prime Minister Ehud Olmert. The background for the criticism: Lapid’s previous statements about Knesset member Aryeh Deri, one of the ultra-Orthodox Shas party’s leaders, who as a “person who was convicted and sat in prison, it is not appropriate that he [Deri] returns to politics.”

“And what about a person who was convicted, but didn’t sit in prison?” quipped Tochfeld, referring to Olmert. The background: Olmert was convicted for breach of faith, but acquitted of the main charges against him.

In the course of his election campaign, Lapid directly attacked Adelson and Adelson’s paper a number of times, mentioning the background of their problematic relationship with Netanyahu. Lapid claimed that Israel Hayom is, in effect, an “election donation” from Adelson to Bibi (Benjamin Netanyahu). On his Facebook page, Lapid nicknamed Israel Hayom as “Netanyahu’s official journal.”

Beyond all that, it is interesting to go back to the interview given by Lapid to the army radio station Galei Zahal in September 2012, when the election campaign was in the offing and Netanyahu’s relations with Obama had reached a nadir. At the same time, the prime minister supported Obama’s Republican rival, Mitt Romney, almost publicly. Romney had also won Adelson’s favor and respectable monetary contributions to the tune of tens of millions of dollars to the Republican election campaign. As we all know, the casino mogul “bet on the wrong horse.” This is what Lapid said: “With his own hands, Netanyahu destroyed what Israel has maintained over 64 years. Israel had never been associated with any American party, but Netanyahu brought us close to the Republican Party, because Sheldon Adelson financed it, because he knows Mitt Romney. And now we are stuck because Obama, who it seems will win the elections, treats Israel like a branch of the Republican Party.”

So it seems that Nuni Mozes, in addition to Netanyahu, is likely to show great interest in this new and interesting axis between Lapid and Adelson. Yedioth Ahronoth usually showered Lapid with positive headlines, as part of its war against Netanyahu and Israel Hayom and also to show tribute for someone who had been one of the newspaper’s senior writers, almost until the actual elections. Nuni Mozes had received a lot of criticism for allowing Lapid the politician to continue to write his musings, thus in effect helping Lapid’s election campaign — so it was said. Yet, Mozes did it nonetheless.

But evidently, this picture is going to change.

Adelson’s fortune is estimated at about $25 billion. But it is not the wealth that makes Adelson into a controversial figure, but the fact that he uses it to change and influence politics — in Israel and in the United States as well. Obama turned Adelson’s failed gamble on Romney into a joke last week during a traditional dinner held for White House reporters. “Sheldon would have been better off offering me $100 million to drop out of the race,” Obama joked. He continued, “I probably wouldn't have taken it, but I would have thought about it. Michelle would have taken it. You think I'm joking?”

Lapid’s office refused to respond to questions about his visit with Adelson.