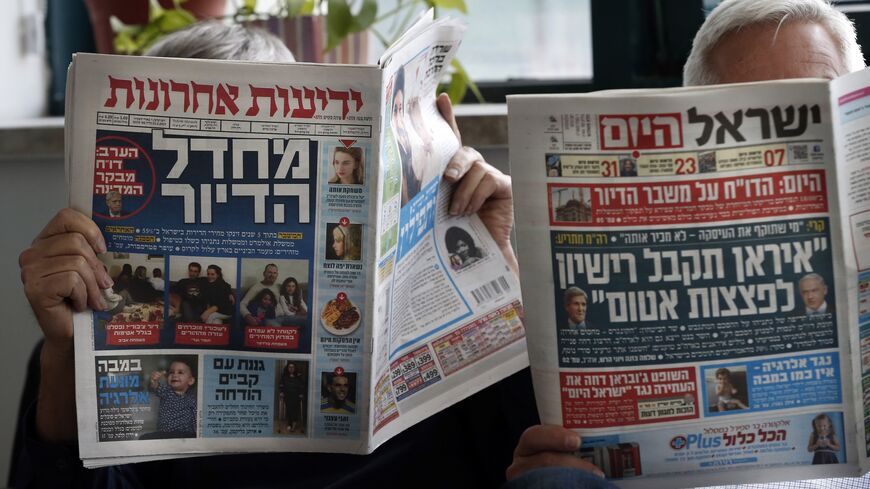 Yesterday, Israel heard the dramatic announcement that Boaz Bismuth would be leaving his position as the paper’s senior editor. The widow of American Jewish billionaire Sheldon Adelson, who died exactly a year ago, inherited his vast empire, which included Israel’s most circulated newspaper. Miriam Adelson had nothing but kind words for Bismuth, who “secured a record number of interviews with former US President Donald Trump and gave readers reliable, high-quality reporting.”

Her mention of Trump offered appropriate framing for Bismuth’s departure as an important political move for the Israeli right.

The paper, which was founded in 2007, identified with Netanyahu from day one. For years, Sheldon Adelson was one of the people closest to Netanyahu. He was also one of the most influential people in the US Republican Party and a major donor to the campaigns of Trump and Mitt Romney. When Trump was in office, Adelson was famous for his influence on the White House, including its decision to move the US Embassy from Tel Aviv to Jerusalem.

Bismuth, Israel Hayom's second editor, is also considered one of the people closest to Netanyahu. His departure was accompanied by rumors that Miriam Adelson now wants to shift the paper’s editorial line from Netanyahu to Prime Minister Naftali Bennett, with whom she has recently become closer. As such, Bismuth's replacement at the paper’s helm is a major political story.

The first clear indication that Adelson was changing paper's angle came last Friday, when a flattering interview of Bennett left no room for doubt. Part of Bennett’s larger media blitz of six interviews with Israel’s major papers, the Israel Hayom interview evoked the greatest interest. Bennett was quoted as promising, “As long as I'm prime minister, there is no Oslo process, and if there will be one, there won't be a government. I oppose a Palestinian state and am also not allowing talks on the line of a Palestinian state.”

Bennett was also quoted as saying, “A new national camp has arisen that doesn't depend on one person, but is founded on a path. As prime minister, I'm leading that camp. It's a camp that isn't based on rejecting others, but on activity. I'm an activist.” His words marked a turning point for the newspaper.

Yair Netanyahu, son of the former prime minister, tweeted, “All that anyone needs to understand from the weekend’s newspapers (which looked like they were printed in North Korea) is this: Israel Hayom is another media tool of the left and Bennett’s private propaganda arm. The good news is that no one told them that print media died a long time ago, so that the influence of the Bennett rag is zero.”

Three days later, clarity came when the news broke that Bismuth was leaving Israel Hayom. Suddenly, Yair's tweet had context as what had been happening behind the scenes at Israel Hayom over the last year, ever since Sheldon Adelson's death, became clear. Sources close to Israel Hayom say that at Miriam's request, the paper had changed its editorial line to favor Naftali Bennett.

The Adelsons were very displeased with Netanyahu's talks with their bitter enemy, Yedioth Ahronot editor Arnon Mozes, in what became known as Case 2000, in which Netanyahu is accused of breach of trust. The investigation discovered that Netanyahu acted behind Adelson’s back by negotiating with Mozes over ways to reduce the weekend distribution of Israel Hayom. In exchange, it was claimed, Mozes, who was disturbed by the way the free Israel Hayom was intruding on his domination over the print press, promised more favorable coverage of Netanyahu in his own newspaper.

The scandal led to a certain estrangement between Netanyahu and the Adelsons. With Trump as president, Adelson continued to benefit from a close relationship with both Netanyahu and Trump. Netanyahu participated in Adelson’s funeral in Jerusalem and even offered a warm eulogy.

It did, however, mark the end of a decades-long relationship that had a profound impact on Israeli politics and the local media realm. Netanyahu and Adelson first met when Netanyahu served as Israel’s ambassador to the United Nations. They formed a close friendship, based at least in part on similar ideologies. For years, this relationship remained reciprocal and close while both their careers skyrocketed. Adelson’s businesses thrived, and Netanyahu won the primary for the leadership of the Likud. In 1996, he was elected prime minister.

Even at the low point of Netanyahu’s political career, Adelson’s door was always open to him. He continued to hold that Netanyahu was the best person to lead the Israeli right. Netanyahu brought Adelson on board with his plan to establish a new right-wing newspaper in Israel. He convinced Adelson that it was a matter of existential importance to the Jewish people, because the media was controlled by the left.

Israel Hayom was founded as a free newspaper, with almost a quarter of a million copies handed out on its first day. It's an enormous number, considering the size of the Israeli market. People close to Netanyahu filled key administrative and editorial positions in the paper.

Adelson was more than just an open wallet. He was also involved in the paper’s management and editorial line. Every so often, he would show up in the newspaper’s Tel Aviv office with his wife to participate in top-level meetings. Control of the paper transferred to his wife a year ago. She is, of course, very familiar with her late husband’s ideological legacy and acts accordingly.

Whether the change will have an impact on Netanyahu's political future is not at all certain. The media market today is dramatically different from what it was two decades ago, when Israel Hayom was first founded. Netanyahu now dominates social media platforms.

It is hard to imagine that the backing of Israel Hayom will help Bennett win back the support of the right. He did, after all, form a coalition with the left that led to Netanyahu's fall. Netanyahu remains Israel’s most popular politician. On the other hand, Bennett not only inherited the office from Netanyahu, he also inherited his newspaper.