Indicted for bribery, Netanyahu ramps up his victimization campaign

The decision by Attorney General Avichai Mandelblit to indict Prime Minister Benjamin Netanyahu on charges of receiving bribes, fraud and breach of trust could be one too many even for the comeback master. 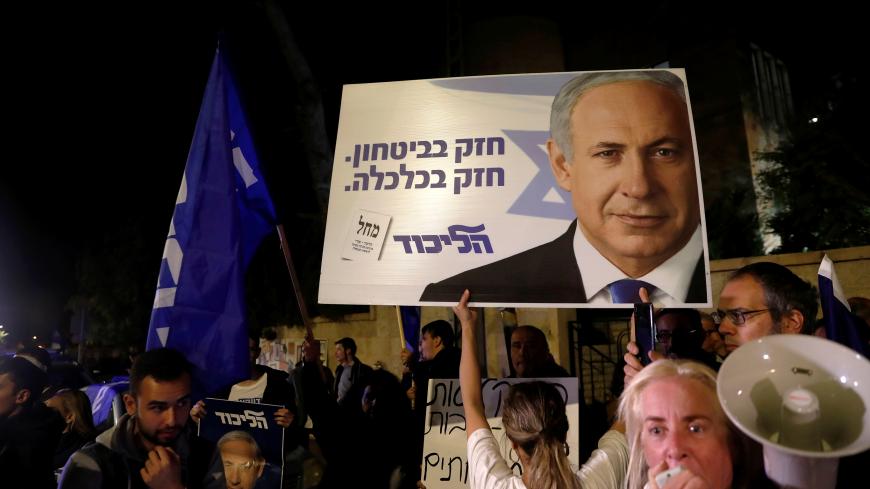 The decision to indict Israeli Prime Minister Benjamin Netanyahu was made “with a heavy heart but also with a whole heart,’’ Attorney General Avichai Mandelblit said Nov. 21 in informing Israelis that he has decided to charge Netanyahu with bribery, fraud and breach of trust.

Mandelblit knows his boss inside out. He was a confidant of the prime minister and a member of his intimate circle, serving for four years as Cabinet secretary. "Prime Minister Netanyahu is a privileged man. I have been privileged to work beside him and to see his many talents and abilities as prime minister … (but) law enforcement is not a choice. … It's not a matter of right or left, it's not a matter of politics," Mandelblit said. The attorney general emphasized that it was a difficult day for the Israeli public and for himself personally as he dropped the bombshell, which threatens now to sow unprecedented chaos throughout Israeli society.

Earlier articles here promised a “perfect storm” encompassing Israel’s political, diplomatic and security establishments. It finally arrived the evening of Nov. 21; Israel is now in the eye of the storm. Anything is possible and all the scenarios are on the table. In the past, Netanyahu rejected suggestions by his lawyers that he give up the fight and strive to reach a plea deal, which could have gotten him off the hook with a symbolic penalty in exchange for having the cases against him closed. But will Netanyahu give up? Will he make his final bow and leave the stage? It doesn’t look like it. The prime minister is the ultimate comeback kid. The man never gives up.

“Israel is facing a serious risk of civil war,” one senior official in the Blue and White party told Al-Monitor on condition of anonymity after Mandelblit's announcement. “Netanyahu will not hesitate to sic his supporters on those institutions of government that represent the rule of law. He has no inhibitions. He has no brakes. The situation is more dangerous than ever.” In this situation, the keys are in the hands of the Likud party’s Knesset faction. Will they dare to raise their heads and challenge Netanyahu? Will enough Knesset members join Likud Knesset members Gideon Saar and Yoav Kisch, the only ones to announce that the time has come to hold a primary to determine who will lead the party? That question will be answered in the coming days.

Mandelblit reached his decision after three years of intense investigations, marathon discussions, three state witnesses and thousands of pages of transcripts. In the case of the gifts (Case 1000), in which Netanyahu is accused of receiving gifts worth hundreds of thousands of shekels from billionaires Arnon Milchan and James Packer, Netanyahu is being charged with fraud and breach of trust. In Case 2000, in which Netanyahu is accused of conspiring with the Yedioth Ahronoth publisher Arnon Mozes to commit bribery, the prime minister is charged with fraud and breach of trust, while Mozes is being charged with offering a bribe to an official. It is, however, Case 4000, the flagship case of the attorney general's office, that poses the greatest threat to Netanyahu. In this case, he is being charged with bribery. According to the specific clause in the letter of indictment, Netanyahu granted benefits worth billions of shekels to media tycoon Shaul Elovich in exchange for placing the news portal Walla at the disposal of Netanyahu and his family. This case has considerable evidence, including state witnesses, transcripts, text messages and testimony about the reciprocal relationship between the two parties. Bribery is an especially serious crime in Israel. If convicted, Netanyahu could expect to be sentenced to a stiff prison term. If and when that happens (many years down the road), he would become only the second prime minister in all of Israel’s history to serve time in prison (with the other prime minister being Ehud Olmert).

Netanyahu may be the greatest comeback artist in all of Israel’s political history, but the blow he suffered Nov. 21 leaves people wondering whether he can survive this time. Mandelblit’s decision came just one day after Blue and White party chairman Benny Gantz’s mandate to form a new government expired. Israel now enters an unprecedented period. For the next 21 days, any member of the Knesset can form a government as long as he or she submits a list of 61 Knesset members (including himself or herself) who support the candidate. The predominant assessment in the hours after Gantz’s announcement was that no member of the Knesset would be able to muster the necessary support, meaning that Israel would face a third round of elections in March 2020. But the attorney general’s dramatic decision to leave the charges of bribery in place changes all the rules of the game and reshuffles the deck. It has sent shock waves through all the fortifications that Netanyahu has built around himself and may even shake up his right-wing, ultra-Orthodox “immunity bloc” of 55 seats, which continues to follow his every instruction.

What happens over the coming days will indicate whether the fortress surrounding Netanyahu will collapse, or whether he will prepare to fight a final battle, which will cost Israel dearly.

And even that is not the end of Netanyahu’s troubles. According to various legal opinions, the fact that he is accused of crimes and was indicted could prevent him from forming a new government altogether. While the law allows a prime minister to continue serving while under indictment, it is doubtful whether it would allow someone charged with crimes to form a new government. It is reasonable to assume that Mandelblit will be asked to respond to this question soon and that the Supreme Court will chime in as well. Most senior Likud officials and the Israeli political system hope that this will, in fact, be the ruling. Almost all of them want to be rid of Netanyahu, whom they consider to be an old cork sitting atop a bottle of Israeli champagne. The problem is that not one of them is willing to act.

Netanyahu, reacting to Mandelblit's decision, made it clear that he is heading for war. The speech he delivered was an unbridled and unprecedented incitement text of a leader out to demolish the institutions of his own country. He accused the police and the state prosecution of an “attempted coup,’’ blaming the police for fabricating cases again him. The meaning of his words was clear — a call upon his supporters to go up against the Supreme Court with all their might. Israel is finding itself torn from the inside and closer than it has even been before to a civil war.