As police investigations gain momentum and the noose tightens around Israeli Prime Minister Benjamin Netanyahu’s neck, the premier finds himself more isolated than ever. 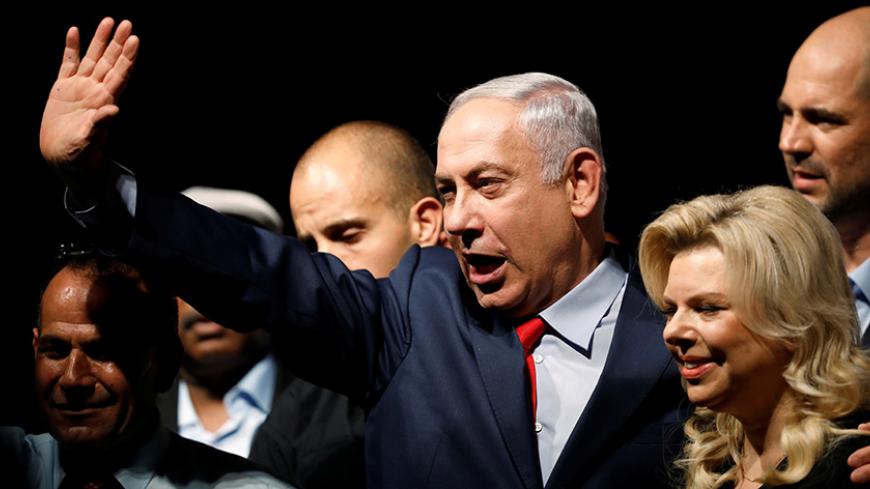 With the investigations into his affairs intensifying, Israeli Prime Minister Benjamin Netanyahu decided to organize a huge rally in support of himself. He wanted to remind everyone that he still has huge numbers of people behind him. On the evening of Aug. 9, he got what he wanted when he stood before thousands of supporters at the Tel Aviv Convention Center. Yet, even as he stood there, he could not hide his weakness or the pressure he feels as the various interrogations threaten to close in on him.

Netanyahu in the summer of 2017 is a prime minister fighting for his political future, while at the same time engaged in a long and Sisyphean legal struggle that is only just beginning. This is not the same confident Netanyahu of just last year, who offered a show of power in closed talks with journalists from all the major media outlets, treating them to long, decisive monologues on his views about the economy and security issues, his struggles with the left-wing media and his plans for the future.

While all of that was going on, there was already talk of secret investigations into his dealings. Within just a few months, the public learned about the severe allegations surrounding Case 1000 (the gifts Netanyahu allegedly received from wealthy businessmen), Case 2000 (his conversations with the publisher of Yedioth Ahronoth, Arnon Mozes, for a deal of positive coverage) and Case 3000 (the purchase of submarines from Germany; although he is not a suspect in the case, his personal lawyer and cousin David Shimron is). Over the last six months, and especially in the last week, it seemed as if the noose was getting tighter, when another close confidant, his former Chief of Staff Ari Harow, became a state witness against him.

Until the investigations are over and the attorney general decides whether to indict him, Netanyahu can expect to face a longtime trudging through various legal and police issues. He will be called repeatedly to interrogations under warning, and the public will slowly learn about the additional evidence against him.

The show of force that Netanyahu organized for himself after such a difficult week was intended to give him back control of the agenda. He wanted to shift the public discourse away from his legal and criminal affairs, and to turn reports about the investigations into a fight between right and left over efforts to depose a serving prime minister.

A speech designed to appeal to his hardcore supporters won his audience at the Tel Aviv Convention Center. In it, Netanyahu spoke about "an unprecedented, obsessive witch hunt against me and against my family, with the goal of achieving a coup against the government. Their aim is to put false nonstop pressure on the legal system to get an indictment at any price." The crowd cheered as he went on to ridicule the indictment that his wife Sara is facing for the misuse of public funds.

The event was organized by the chairman of the coalition, Knesset member David Bitan, who has been tasked recently with all sorts of special assignments for Netanyahu. But it was hardly a surprise party. Netanyahu was the vibrant force behind the whole idea, and in the two days preceding the event he received regular updates about the preparations. When it became clear to him that senior members of the Likud Party planned to attend, he confirmed that he would be there to deliver the keynote address.

Netanyahu entered the hall with his wife only after it was filled to the brim with party activists, heads of local branch offices and all the senior members of the party who were in the country. The atmosphere was tense; there was a feeling as if they were "fighting for their home." Bitan filled the role of a one-man opening act. He made sure that posters attacking the left were ready and that buses packed with supporters arrived. And he made sure to send a threatening message to the party's leadership: Anyone who does not support the prime minister will pay a price for it in the primaries.

Bitan provided the goods. Netanyahu received the backdrop that he wanted for his speech, which was broadcast live on all TV channels and online.

But once the excited crowd of supporters was gone, Netanyahu was left very much alone, facing a much less pleasant situation than what he faced at the convention center. His confidants and ardent defenders are in and out of interrogation. For years, Shimron provided legal counsel to Netanyahu and his wife, but now they were prevented from talking. His confidant Shlomi Filber, the director general of the Ministry of Communications, is under suspicion too because of the Bezeq telecommunication company investigation, and as such, has been suspended from his post. Other confidants, including former Chief of Staff Gil Shefer and his predecessor Natan Eshel, are no longer around. In fact, the police are trying to recruit Shefer as a state witness, hoping that he will testify in several of the cases.

Apart from Bitan, there isn't a single minister or Knesset member left that Netanyahu can consider a political ally. He doesn't trust any of them, and the truth is that they also prefer to keep their distance from him. Now that Harow has reached an agreement with the police, Netanyahu — who has a hard time trusting the people around him anyway — finds himself more isolated than usual. The recent show of support doesn't change that.

The event at the Tel Aviv Convention Center provided Netanyahu with the political credit he needs. He succeeded in gathering the Likud's supporters around him and energizing them with a sense of victimhood and hatred of the left and the media. When it comes to letting these genies out of the bottle, Netanyahu is the most skilled performer there is. During the rally, he sent a clear message to his potential heirs, headed by Minister of Transportation Yisrael Katz, who attended, and former Minister of Interior Gideon Saar, who did not. The party is still behind him, so they had better not challenge his leadership. As for infighting within the Likud, Netanyahu is now reaping the benefits of years of hard work neutralizing an entire generation of party members who posed a threat to him.

Netanyahu acted cleverly and with political sophistication when he tied his fate to that of the Likud and the right, and then recruited Likud supporters to fight his personal battles. "This morning, one of you wisely told me," he recalled in his speech. “They don’t want to just take you down, they want to take us all down. … They know that they can’t beat us at the ballots, so they are trying to circumvent democracy and topple us without elections."

Without saying so explicitly, he incited the crowd against the legal system and fired off all his heavy artillery, as if this was his final message in a heated election campaign. Then again, if Netanyahu really wasn't worried about the situation because, as he says, "Nothing will come of it," he wouldn't need to fire off all his doomsday weapons.