Prime Minister Benjamin Netanyahu has already prepared his public strategy in case the police recommend his indictment for accepting bribes. 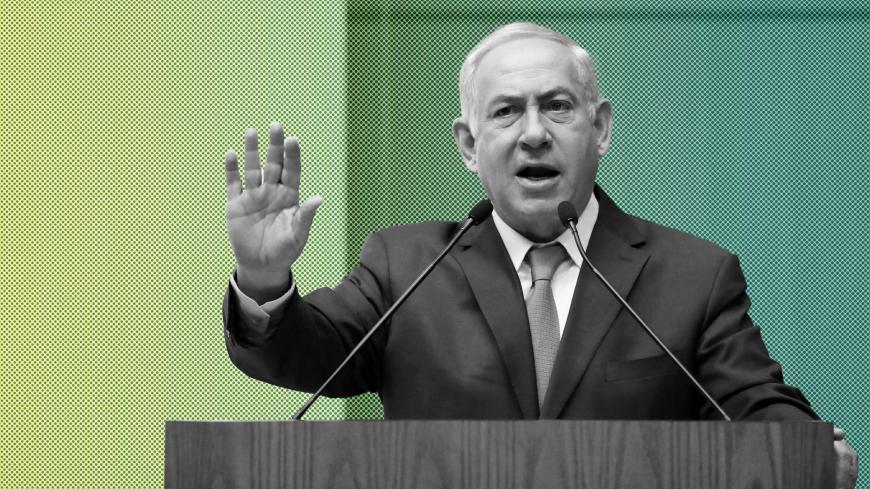 Israeli Prime Minister Benjamin Netanyahu gestures as he speaks during an event marking The Appreciation for the Fallen of Israel's Wars and Victims of Terrorism Day at the Knesset, Jerusalem, Dec. 12, 2017. - REUTERS/Ammar Awad

When he was prime minister, Ariel Sharon used to pop into the Knesset cafeteria every so often, mainly in times of political crises or of major achievements. When he was in trouble, it was his way of showing that it was still business as usual and that he was in control of the situation. When he had a major success, he turned his time in the cafeteria into a show of strength to the journalists crowded around his table.

In his current term, Prime Minister Benjamin Netanyahu appeared only once in the cafeteria. This is the era of social networks, a medium he adapted to so well that he no longer needs direct contact with the press. But at midnight Dec. 11, he showed up in the cafeteria full of energy and surrounded by an entourage of security guards and at least five advisers.

Netanyahu had returned from a trip to Europe just a few hours earlier. He showed up in the Knesset almost at once to put out the smoldering rebellions in his coalition in response to the Supermarket Law. This bill, initiated by the ultra-Orthodox, enables the interior minister to bypass municipal regulations that permit the opening of businesses on the Sabbath. The contentious law was supposed to be put up for a vote some time during the night, but it was not clear that it would have a majority, given Yisrael Beitenu's vehement opposition to it. Ultra-Orthodox Shas Chairman Aryeh Deri exacerbated the crisis when he threatened to resign from government if the law failed to pass. The law was intended to assuage the ultra-Orthodox after the government would not stop maintenance work on the railroad on the Sabbath.

In normal circumstances, it would have been up to coalition chairman David Bitan to grant Netanyahu the peace and quiet he yearned for by reining in the coalition with a high hand. Now Bitan is tangled up in criminal investigations of his own and is effectively neutralized. That is why Netanyahu made a point of trudging to the cafeteria. Someone had to fill Bitan's shoes.

In this case, his show of entering the cafeteria, which was filmed and posted on social networks both by his own people and the amused journalists, was intended to show (a la Sharon) that it was more than just business as usual. In fact, his message was that business is outstanding. Netanyahu knows that the police will interrogate him yet again on Dec. 15, but he was all smiles and jokes as he chatted with political reporters and offered his assessment that the next election would be held in 2019. This had an immediate impact on his image in the media. Informal footage of the prime minister went viral, and media reports of a coalition crisis died down accordingly.

Netanyahu's good mood can be attributed to his visit to Europe. It was a good visit after all, despite reservations expressed by French President Emmanuel Macron about President Donald Trump's proclamation regarding Jerusalem. All in all, Netanyahu is reaping the public and political benefits of the gift given to him by Trump. It earned him support from the right, but also from his rivals on the left, including Zionist Camp co-leader Tzipi Livni and former Prime Minister Ehud Barak. They both had no choice but to congratulate Netanyahu and admit that the Jerusalem proclamation was a historic event. Despite the criminal investigations and signs of a quiet revolt against him within his own party, Netanyahu suddenly seemed to carry the Likud on his shoulders once again.

There are serious suspicions surrounding Bitan, which include entanglement in the gray market and receiving bribes from criminals. The police are planning to recommend the indictment of Welfare Minister Haim Katz for bribery, and there’s a journalistic investigation into the corrupt political network that Israel's UN Ambassador Danny Danon allegedly built for himself. Taking all of that into account, the idea of Netanyahu visiting world capitals and benefiting from a rare diplomatic success looks like the best thing to happen to the Likud.

Despite the apparent problems and the pervasive feeling that new elections are right around the corner, Netanyahu's coalition is still stable. None of the leaders of the coalition parties wants elections now, so they are doing nothing to advance them.

Nevertheless, the various investigations into Netanyahu's affairs hover over all of this, casting a dark shadow. Netanyahu himself believes that the die has been cast and that in January or February, the police will recommend his indictment in the gifts case for accepting bribes. This is, therefore, a critical time for Netanyahu. He is concerned that Finance Minister Moshe Kahlon will not be able to withstand public criticism and will therefore bring down the government. Talking to Al-Monitor, senior members of Kulanu estimated that some 70% of the party's electorate are "anti-Netanyahu," and they expect Kahlon to play an active role when it comes to the corruption scandals surrounding the prime minister.

The various investigations into Netanyahu's affairs hover over all of this, casting a dark shadow.

So far, Netanyahu has been using all of his political acumen to keep the leaders of the coalition parties happy. It is impossible to ignore how adeptly he maneuvers between all of their conflicting desires and demands. Maintaining the stability of his coalition is a key part of his preparations for the day the police release their recommendations. The more Kahlon, for example, has to lose as finance minister in terms of budget and freedom to run an election economy, the less motivated he will be to dismantle the coalition.

Another move is replacing the coalition chairman. Netanyahu really did like working with Bitan. He relied on him and admired his political adroitness. Most of all, he appreciated the backing that Bitan gave him in the media. Now, however, while Bitan still holds the position, he is a lame duck. With the long, intense interrogations he faces just about every day, he is having a hard time managing the coalition. Furthermore, Netanyahu realizes that he will have to "purge" the Likud of apparent corruption. In practice, this means that he will be appointing a new coalition chair very soon. He is being careful not to slight Bitan, at least not now, but a source close to Netanyahu said that plans to replace Bitan are already in place.

The prime minister's preferred candidate is Knesset member Yoav Kisch, a fighter pilot in the air force who has a clean image as someone with values. He has also accumulated the experience he needs since he was first elected to the Knesset in 2015, and he would be acceptable to many in the coalition. While Netanyahu is under some pressure to appoint more veteran Knesset members Miki Zohar or David Amsalem, he prefers Kisch. Both Amsalem and Zohar are identified with the wheeling and dealing for which the Likud is notorious. On the other hand, if Kisch was to serve as the face of the Likud, he would offer a clean image to the voters.

Netanyahu's strategy until the police recommend his indictment will include an emphasis on a diplomatic, security and official agenda. Over the last few weeks, his Facebook page has been plastered with reports of his achievements. These include the Trump proclamation, his official visits to Africa and Europe, and the lighting of the first Hanukkah candle in the prime minister's residence with a live video hookup to Israeli diplomatic representatives in consulates and embassies all around the world.

Netanyahu's campaign for the day after the police recommendation is also ready. He will claim that the police and the media have been persecuting him and are plotting to bring down the outstanding right-wing government, which he heads. He will then ask the people whether, given his enormous diplomatic and security achievements, he should really be sent home for taking some cigars and a few bottles of champagne.