Yair Lapid, the chairman of Yesh Latid, must seize this historic opportunity and impose a real plan for drafting the ultra-Orthodox into the army, writes Mazal Mualem. 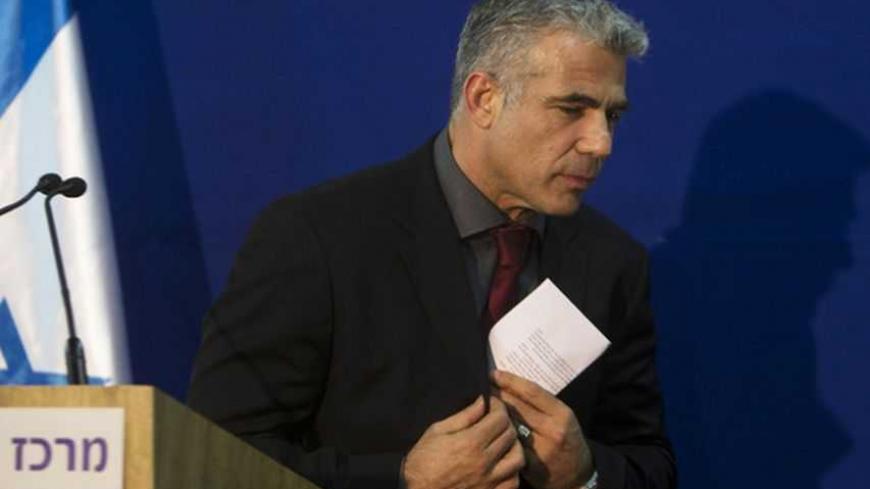 Yair Lapid, leader of the Yesh Atid (There's a Future) party, leaves the podium after delivering a statement to the media in Jerusalem, Jan. 30, 2013. - REUTERS/Ronen Zvulun

Less than 24 hours before the voting booths opened, Prime Minister Benjamin Netanyahu met with a high-level political personality in his chambers and told him that he thought Yesh Atid Chairman Yair Lapid would play a significant role in his third government. In that same conversation, Netanyahu already began to outline the basic principles of his future government that would include the ultra-Orthodox, together with Lapid. He defined one of his first missions: a new law for equal share of the defense burden, that would replace the Tal Law.

The Tal Law that was accepted in the 2002 Knesset (Israeli Parliament), in effect legitimized the continuation of wide-scale military exemptions for the ultra-Orthodox, as part of the arrangement in which “their Torah study is their main occupation.” About a year ago, the High Court of Justice ruled that the Tal Law is unconstitutional and must be changed; ever since, treatment of the issue has been postponed and delayed. Then the Plesner Committee submitted recommendations on the issue of recruitment of Israelis to the Israeli Defense Forces, and in particular regarding the recruitment of ultra-Orthodox and Arabs. When Netanyahu faced the historic change embodied in the Plesner Committee proposal, he preferred to remain with Shas and United Torah Judaism [i.e., the ultra-Orthodox parties] in the government. In doing so, he dismantled his short-lived partnership with Shaul Mofaz, who at the time headed the “large Kadima” party — today, they have only two mandates — that was supposed to help him solve the draft-crisis.

That is how it happened that the elections were rescheduled earlier, no new draft law was legislated, and the State of Israel is now in the midst of an extensive constitutional crisis. And that is due to the fact that the 54,000, 18-to-28-year old, ultra-Orthodox males that are supposed to serve in the Israel Defense Forces, are defined by law as lawbreakers; they have no exemption certificates and are deserters. That is the reason that Netanyahu does not have many options left. According to the High Court directive, one of the first tasks of a Netanyahu government is the drafting of a new burden-equality law.

In the conversation cited above with the high-placed official, Netanyahu said, “We can easily come to an agreement with Yair Lapid and the ultra-Orthodox sector. Lapid’s proposed guidelines on the issue are “weaker” than those of [Moshe] "Bogie" Ya'alon (Netanyahu’s representative to the discussions for formulating an arrangement). Shas will find it a lot easier with him [Lapid].” The following night, in a speech Netanyahu delivered in the Exhibition Grounds after the publicizing of the official election results, he already committed himself to take action on behalf of “sharing the burden.” It even sounded as if he was reciting the Yesh Atid campaign slogan.

Therefore, Lapid’s great achievement in the elections is no less than an historic opportunity. This is a one-time chance to halt the mass draft-dodging of the ultra-Orthodox from army service, a phenomenon that is ballooning to enormous dimensions. This phenomenon creates commensurate frustration among youths of the same age, who leave everything at age 18 to enlist in the army for three years.

Demography shows that within two decades, every fourth child in Israel will be ultra-Orthodox; this means that almost every fourth Israeli youth will not serve in the army. In effect, there will be two countries here — one that serves and one that does not.

The numbers speak for themselves: In 1948, 400 exemptions were granted to yeshiva rabbinical college students. But in 2012, the number of exemptions granted to 18-year-olds was 8,000.

The yeshiva-exemption phenomenon, under the aegis of Israeli governments throughout the generations, has substantive implications for the army structure in the future (discussed in a separate article). But even more so, it has dramatic implications for Israeli society. This phenomenon festers like a bleeding sore and has become, together with the “housing protest,” the banner of the middle class that demands equality in sharing the burden.

As derived from the demographic forecast, the electoral weight of the ultra-Orthodox in future Knesset configurations is expected to increase – along with their bargaining power.

In one of his more effective election slogans, Lapid asked, “Why should my child drag the [army] stretcher by himself?” If Lapid won’t succeed in effecting a change, this stretcher may flip over and hit him. The 19 mandates given to him by the public becomes a debt he must repay before next elections come around.

In order for this to happen, Lapid must present his ultimate demand: a new law for “equality in sharing the burden” as a pre-condition for coalition negotiations. This must be even before any [other] reform or position [in the government].

The election results have transformed Netanyahu into a weakened prime minister who is dependent on Lapid more than on any other coalition partner. In addition, Shas and United Torah Judaism understand that they will not succeed this time in evading a new “sharing the burden” law that is now mandated by High Court ruling.

These are excellent opening shots for Lapid. But all this can also dissolve in an instant, if he does not play his cards right.

Firstly, Lapid must make fundamental changes in his “sharing the burden” plan that was unfurled during the course of the campaign. Netanyahu had good reasons to describe it as “much weaker than Ya’alon’s plan” for the ultra-Orthodox. The reason for this is that according to Lapid’s guidelines, all ultra-Orthodox Jews would receive sweeping exemptions [from army service] for five years, during which time a national authority for civilian service would be established. This authority would be the foundation for appropriate frameworks for ultra-Orthodox army draft and civilian service. Only at the end of this process will all the ultra-Orthodox be drafted, except for 400 outstanding yeshiva students. However, this program is unbalanced because it defers the urgent treatment of the problem. And by the way, “another five years” is one year after the date of the next elections, assuming they will be held on time.

A close look at the numbers makes it easier to understand the magnitude of the problem: Every year, about 8,000 yeshiva students join the circle of army-exemption recipients. The significance of this is that according to the Lapid guidelines, more than 40,000 draft-age ultra-Orthodox men will join the exemption-circle [in five years]. In other words, the problem will only intensify.

Therefore, as Lapid prepares to enter into negotiations over a burden-equality law, he should present a revised plan with concrete but gradual numerical targets for conscription, with an enforcement mechanism. Most important of all is to anchor it in a rigid, immediate time-frame and in binding governmental resolutions. Nothing must be left to chance, and to Netanyahu’s goodwill.

Any achievement less than this, will require Lapid and his party to pack their bags — together with the 19 mandates he received — and join the opposition. Otherwise, it will be a betrayal of the middle class.

Mazal Mualem started her journalistic career during her military service, where she was assigned to the Bamachane army weekly newspaper.