Defense Minister Avigdor Liberman advances a compromise outline on the enlistment of the ultra-Orthodox, even though the opposition accuses him of caving in to them. 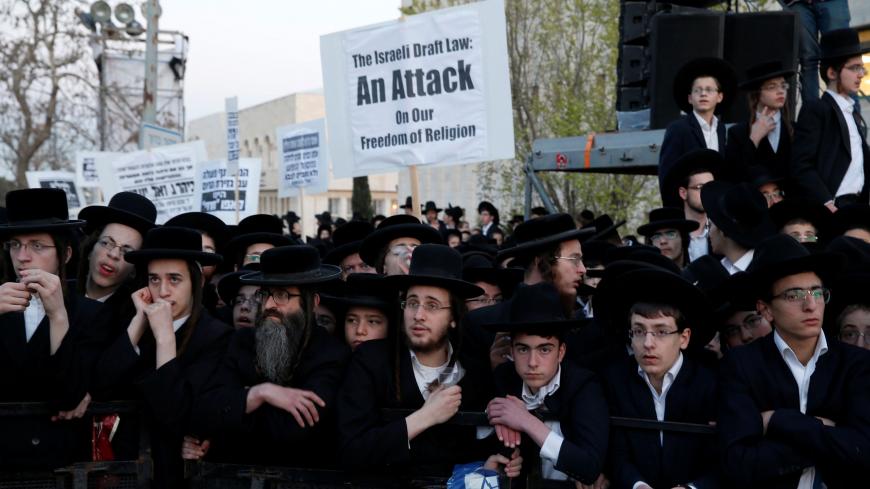 Ultra-Orthodox Jewish protesters take part in a demonstration against members of their community serving in the Israeli army, in Jerusalem, March 28, 2017. - REUTERS/Baz Ratner

Now, one week after he presented his new conscription guidelines, Liberman is confident that the ultra-Orthodox will finally come to their senses and support him unanimously, so that the emerging coalition crisis finally comes to an end. His outline will be brought before the Knesset for approval in the coming weeks. According to Liberman, it offers the only practical guidelines that both the secular and ultra-Orthodox communities can rally around, before Israeli society misses the bus.

“The ultra-Orthodox would have to be crazy to bring down this law. If it doesn’t happen now, the Supreme Court will conscript them by force,” Liberman told Al-Monitor.

Liberman is referring to efforts by ultra-Orthodox Deputy Minister of Education Meir Porush (Yahadut HaTorah) to stir up a coalition crisis, if the economic sanctions imposed against yeshivas that fail to meet conscription targets are not removed from the guidelines. As of now, this demand by Porush has not been taken up by the other ultra-Orthodox politicians. It is seen more as internal politicking, so it is getting limited attention in the larger political arena too.

Liberman is dismissive of the approach led by left-wing Meretz Knesset member Mossi Raz and others that the time has come to get rid of compulsory military service entirely. “The State of Israel could not exist with just a professional [volunteer] army. It is a big mistake to think that it is even possible,” Liberman told Al-Monitor. “Our military is built on the model of a people’s army. The two objectives set for it by our first prime minister, David Ben Gurion, when the IDF [Israel Defense Forces] was first found, are as relevant now as they were then. These are to defend our borders and serve as a melting pot. These two principles also underlie the new Conscription Law.”

Barring any surprises, there is a good chance that the new law will be approved before the Knesset leaves for its summer recess on July 22. That is because even if the new law shows enormous flexibility — some even call it “surrender” — in dealing with the ultra-Orthodox, the fight against it in the political arena, led mainly by the opposition, is being kept on a low flame. Even centrist (opposition) Yesh Atid Chairman Yair Lapid is signaling that he will support the law, even though ultra-Orthodox avoidance of military service has been one of his banner issues for years.

It is hard to believe that the ongoing, evolving crisis over ultra-Orthodox conscription isn’t evoking the same passionate response as it once did. At one time, it led to a coalition’s collapse — when Kadima under Shaul Mofaz quit the government in July 2012 — and it built up Lapid as a powerful secular brand in the 2013 election.

In the late 1990s, the Supreme Court ruled that the defense minister does not have the authority to grant yeshiva students a comprehensive exemption from military service. As a result, the Tal Law, passed in 2002, was the first attempt to regulate exemptions from compulsory military service and encourage the ultra-Orthodox to enlist. The problem was that a decade later, in 2012, the Supreme Court ruled that this “historic” law failed to achieve its objectives and rescinded it. Since then, each successive government has failed to come up with a solution that meets the Supreme Court’s standards, advances the idea of equitable service and the needs of the IDF as a people’s army, and win the support and cooperation of the ultra-Orthodox.

One prominent example of this failure to reach a compromise was the decision by Kadima, led by Mofaz, to join the Netanyahu government in May 2012 to resolve the problem of equal service. The partnership collapsed just two months later because the ultra-Orthodox boycotted the process and Netanyahu folded. The guidelines suggested at the time, which included personal economic and criminal sanctions against those people avoiding military service, were seen by the ultra-Orthodox as an attempt to humiliate and even persecute them.

Another window of opportunity opened up in 2013, when Lapid won 19 seats in the election after running largely under the banner of “sharing the burden” (namely that all Israelis, including ultra-Orthodox, should enlist). He was then able to force Netanyahu to put together a government without the ultra-Orthodox. This, in turn, led to the passing of the 2014 Conscription Law, which included personal sanctions against people avoiding the draft. While Lapid emerged as the big winner then, his law was revoked in 2015 after the ultra-Orthodox parties made rescinding this law a major condition for them to join the new coalition. The fourth Netanyahu government went on to put together a new law that the ultra-Orthodox could accept, but the Supreme Court intervened again. It overturned that law in September 2017 on the grounds that it failed to correspond with basic principles such as equality and a people’s army. The court then instructed the government to pass a new law within a year.

At this point, the hot potato got passed to Liberman. That is what led to the birth of this week’s new law. The ultra-Orthodox would be able to live with it, the Supreme Court would not overturn it and, no less important than that, the highly regarded Chief of Staff Gadi Eizenkot would embrace it.

The new guidelines do not include criminal or personal economic sanctions against people who avoid conscription. Instead, it just imposes sanctions against yeshivas that fail to meet their conscription targets. These targets are less ambitious too, while the standard of “Who is ultra-Orthodox?” was expanded to encompass former yeshiva students who no longer devote their lives to study.

Set in terms of the turbulent years of the struggle to “share the burden” equitably, this constitutes a surrender to the ultra-Orthodox. If, however, everything that happened in the past two decades is taken into account, it looks like there is no alternative to some mutual compromise.

“It is unclear to me why the Knesset is responding to these guidelines with silent acquiescence, but I plan to lead the opposition to them,” said Zionist Camp Knesset member Itzik Shmuli, speaking to Al-Monitor. For the past few days, Shmuli has been trying to spur his party into action, out of the belief that there is a large public within Israel that sees this struggle as representative of a larger struggle for a society of equals and the refusal to surrender to the ultra-Orthodox. And of course, this would pay off electorally as well. It seems as if his efforts are starting to take hold too, with party chairman Avi Gabbay already starting to speak out against the new guidelines.

But there really is no drama. Shmuli will likely discover that in 2018, secular Israelis are either apathetic to or exhausted with the struggle to “share the burden” equitably. Given the professional and official support for the new guidelines by the chief of staff, there is a real chance that Liberman’s pragmatic approach is politically feasible. In other words, this time it could work.