Populist legislation, spotlighted by the news media, emerged from the right and left of the governing coalition after the Knesset winter session began, but no dramatic change should be expected. 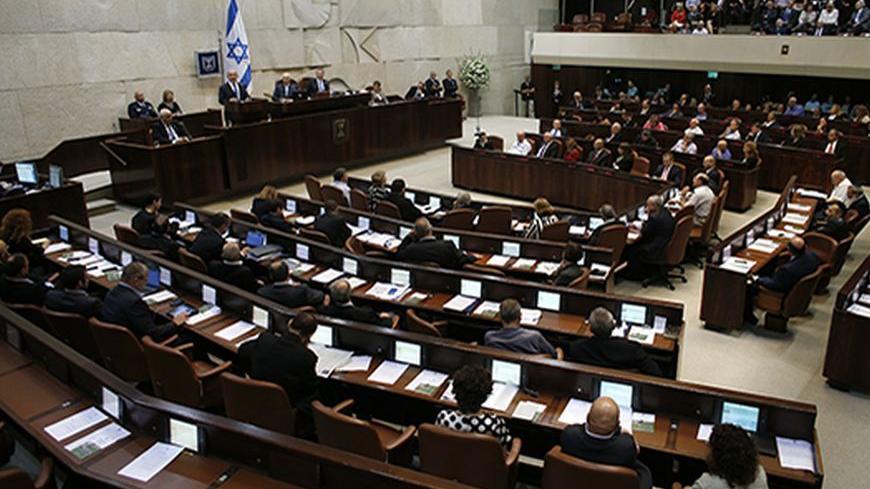 A general view shows Israel's Prime Minister Benjamin Netanyahu speaking at the opening of the winter session of the Knesset, in Jerusalem, Oct. 14, 2013. - REUTERS/Ronen Zvulun

Since the opening of the Knesset’s winter session last week, Oct. 14, newspaper headlines, news websites, radio and TV talk shows have been full of reports of revolutionary legislative initiatives from the right and left of the coalition.

All these pretentious initiatives have two things in common: The first is populism that is intended to take over the agenda of a government plagued by contradictory interests — a preparation of sorts for the next elections — and the second is that they have little chance of actually passing. In the meantime, everyone benefits: Those proposing the initiatives get huge headlines, and those opposing them get to fight heroically against bills that will never pass.

It started with Minister of Justice Tzipi Livni, who is proposing the initiation of a revolution in the relationship between religion and state in Israel through a series of bills. Livni, who in addition to championing the diplomatic negotiations with the Palestinians is trying to distinguish herself in the Netanyahu government as the leader of the civic-liberal faction, made sure to get the leading headline in Israeli daily Yedioth Ahronoth on Oct. 15, where the public learned about the “secular reforms” of the Justice Minister. According to the report, Livni is promoting a long series of bills on the issue of religion and state, such as a premarital agreement that would reduce the number of people denied a divorce (accorded in Israel solely by religious courts), and the “cohabitation law” which would grant equal rights to couples who cannot be registered to be married at the rabbinate.

The ultra-Orthodox protested, of course; Livni was interviewed also in other news outlets, and for a few hours, Israel experienced a “political storm.” Unfortunately, the question of the feasibility of such a reform in the current coalition was missing from the debate. Livni hinted that she has the support of the Yesh Atid party, something that cannot be taken for granted. The party’s chairman, Yair Lapid, has his own civic legislation agenda, and the chance that he’d let Livni drive this agenda in the government is slim.

What about the HaBayit HaYehudi and Likud-Beiteinu parties? Naturally, Livni has no answers, but you don’t have to be a political expert to understand that the chance that this would happen is similar to the chance that HaBayit HaYehudi party Chairman Naftali Bennett would wish Livni good luck in her diplomatic discussions with the Palestinians. And what about Prime Minister Benjamin Netanyahu, who is still contemplating the possibility of including the ultra-Orthodox in the coalition, instead of Lapid or Bennett? The prime minister is still trying to extinguish the fire that broke out over the cancellation of the draft exemptions for rabbinical college students, and it’s hard to believe that he would entangle himself in a plan meant to prop up Livni’s public image.

On Sunday, Oct. 20, the main headline of Yedioth Ahronoth once again announced a radical legislative initiative, this time from the right wing of the coalition, which attempts to limit the powers of the Supreme Court. According to the report, the chairman of HaBayit HaYehudi party, Minister of the Economy and Trade Naftali Bennett, along with coalition chairman Yariv Levin, are expected to embarrass the prime minister and the liberal coalition members with a series of bills to be brought for a vote next week in the Knesset, which will surely ignite another political storm.

In Bennett and Levin’s sights: transferring the authority to elect the president of the Supreme Court to the Knesset, and an increase in the representation of the political system in the committee to elect judges, at the expense of representatives of the legal system. Another bill would grant the Knesset the power to reinstate, with a special majority of 61 Knesset members, a law that was invalidated by the Supreme Court. All this is happening while in the background the “nation state law” proposed by Knesset members Ayelet Shaked and Yariv Levin —  which would require the justices to give precedence to the principles of Jewish law in their decisions, over the principles of universal law — is still alive and kicking.

The media dealt with the right’s attempt to restrict the Supreme Court for two whole days. Livni, Lapid and the opposition chairwoman, Knesset member Shelly Yachimovich, stood like an impregnable wall, issuing profound responses in support of the Supreme Court. On Monday, Oct. 21, each of them opened their weekly faction meeting in the Knesset with a public declaration warning of the right’s move. “The whole essence of these bills is to instill fear in the Supreme Court, and to subjugate it to the political system,” explained Yachimovich, who was quoted extensively on news websites. Lapid and Livni said similar things. Bennett, Levin and Shaked, who accurately predicted these instinctive responses, continued to stoke the fires with their own statements.

In this case as well, you don’t have to be a political genius to understand what’s going on: a war within the coalition over setting the agenda, a mighty desire to make noise in the media — and zero feasibility that one of these proposals will actually come to pass. Netanyahu’s coalition isn’t able to reach agreements over the issue of “sharing the burden,” (drafting the ultra-Orthodox into the IDF), even though the coalition doesn’t include any ultra-Orthodox parties. This is so despite that this hot potato was the crowning glory of the coalition negotiations while it was being formed, and the heart of Yair Lapid’s agenda.

As of now, the law for sharing the burden is stuck deep between Science Minister Yaakov Peri’s governmental committee, which was established with much fanfare, and Ayelet Shaked’s parliamentary committee. As it looks right now, the initiative for sharing the burden will stay with us long into this term, and it’s entirely unclear what its fate will be. If they can’t come to an agreement over a law whose principles were agreed upon in the coalition negotiations, there’s little chance that one of the stream of political revolutions that flooded over us in the last few days will be realized. Just look at Netanyahu — there’s a reason he keeps himself outside of the firestorm.