Likud Knesset member Gila Gamliel does not believe in the outcome of the Washington negotiations: "The state of Israel is the only state we have" and "The Gaza Strip can annex itself to Egypt, some of the Palestinians can annex themselves to Jordan.” 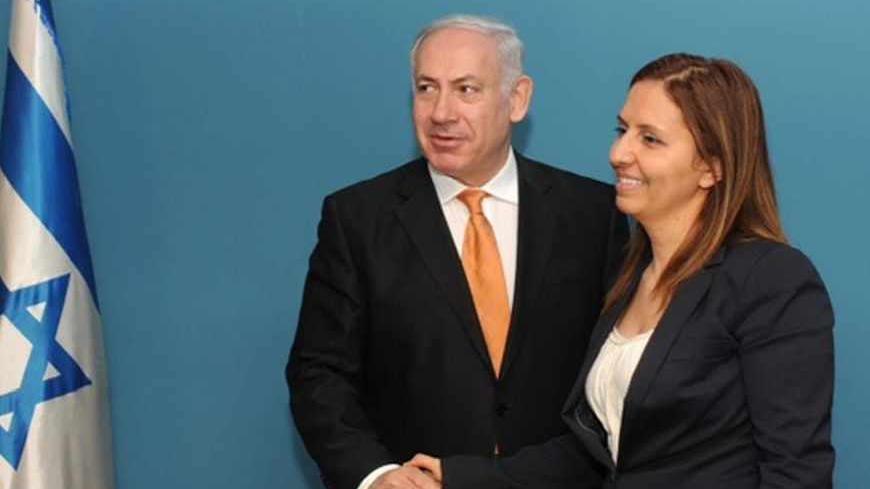 Knesset member Gila Gamliel of the Likud Party is unmoved by the resumption of the diplomatic process with the Palestinians, which was frozen for years. In her Knesset office at noon on July 30, the coalition coordinator of the Finance Committee is sleep-deprived after nightlong voting sessions on approval of the state budget. Justice Minister Tzipi Livni, the government minister in charge of the negotiations, is in Washington at the moment at the behest of Prime Minister Benjamin Netanyahu, to launch the current round of talks. But Gamliel, who was in the past one of the Likud rebels — the party militant group which opposed the Gaza disengagement — does not evince a scintilla of concern.

It is not that she has changed her ideological view of the world. Now — as then — she does not believe in a Palestinian state, although the head of her party committed himself to a two-state solution in his 2009 Bar-Ilan speech. She labels as “immoral” the government decision of July 28 to free Palestinian prisoners in advance of the renewed talks. Gamliel does not believe the moves being plotted in Washington are serious, and she is not the only one in the Likud. This is the typical mindset of many of her friends these days — indifference stemming from their assessment that chances are slim of reaching an agreement with the Palestinians within the nine months allotted by the Americans to negotiations.

Al-Monitor: Netanyahu is renewing the diplomatic process after years. What is your position?

Gamliel: “It’s no secret that no one is enthused by the negotiations, except — maybe — Tzipi Livni who is rediscovering herself. Let’s get real. We’ve been through this so many times, and we will be again many times in the future.

Al-Monitor: In addition, the minute the prime minister will want to reach a permanent arrangement, he will hold a referendum, based on which a decision will be made.

Gamliel: “Knowing that at the end of the road a referendum will be held is soothing for people, because anyone who objects knows he’ll be able to express himself during attempts to convince the public to agree to an arrangement or to oppose it. As I see the situation, we are so far from reaching an agreement, that the possibility of having a referendum in nine months doesn’t seem realistic.

“I look around and I ask, 'With whom are we actually conducting negotiations?' They [the Palestinians] want the state of Israel to free murderers. I’m supposed to conduct peace negotiations when the other side demands that I free murderers who murdered innocent Jews? Where is there left to go from such a starting point?”

Al-Monitor: Where is Netanyahu in this matter?

Gamliel: “There’s incessant US pressure on Israel, and things had to be calmed down, so a diplomatic process was started. There’s very strong pressure being exerted by the United States against Israel. I say ‘against’ on purpose, because I don’t view this as a positive move.”

Gamliel was just a young Knesset member in 2003, when she took part in the famous uprising within the Likud against then-Prime Minister Ariel Sharon, which eventually led him to split the party and establish the Kadima Party. She paid a personal price for this, doing very poorly in the 2006 Likud primaries and being left out of the Knesset that was elected that year. After rehabilitating her political career, she was elected to the Knesset in 2009 and appointed by Netanyahu as a deputy minister in the prime minister’s office.

Al-Monitor: As a graduate of the Likud rebellion, is there a chance of another split? Is Netanyahu capable of taking such a step?

Gamliel: “I don’t see any danger of a split, because there is nothing concrete on the agenda. On the contrary. I think the right wing should unite to form one big party: the Likud, Yisrael Beitenu and HaBayit HaYehudi. This could, in my opinion, constitute a change that would strengthen the prime minister. He will be able to act from a position of strength.”

Al-Monitor: There are those who claim he has lost the Likud to the extreme right wing.

Gamliel: “It’s no secret that Netanyahu doesn’t like to deal with politics. He is too much of a statesman. He spends 80% of his time on defense issues and the remaining time on the budget and on enacting laws. He hasn’t succeeded in surrounding himself with people who can handle these things for him, as he did in the past. In addition, unfortunately, a significant number of Likud members who took part in the primaries did not even vote for the Likud [in the 2013 general elections], and this harmed the democratic process.”

Gamliel is referring to activists from Judea and Samaria who registered as Likud voters to influence the makeup of the party’s Knesset list in the primaries, but then went on to vote for Economy and Trade Minister Naftali Bennett’s HaBayit HaYehudi party in the Knesset elections.

Al-Monitor: What was your position regarding the prisoner release?

Gamliel: “The government adopted a flagrantly immoral decision. On the one hand, we’re being told there are no preconditions to these negotiations, but on the other hand there are conditions.”

Al-Monitor: As the coalition coordinator of the Finance Committee, do you not see a link between the occupation and Israel’s economic situation?

Gamliel: “I disagree with the word ‘occupation.’ There never was a Palestinian state here, and the said territories were mostly abandoned. There are attempts to delegitimize us, including in the European Union, which is motivated by alien interests. I believe we have to explain our position more effectively, to say that the state of Israel is the only state we have. The Gaza Strip can annex itself to Egypt, some of the Palestinians can annex themselves to Jordan. They have many countries.”

In recent weeks, Gamliel was embroiled in a mini political storm when Finance Minister Yair Lapid — according to several reports — asked Netanyahu to depose her from the position she holds on the Finance Committee. The reason: Gamliel demanded changes to be made in his proposed austerity budget and threatened that she would not enable it to win Knesset approval. Eventually, several budget sections were changed, in accordance with her demands and those of opposition Knesset members. Once a political rebel, she has now become a social rebel.

Al-Monitor: Could a different budget have been proposed?

Gamliel: “Lapid should have done things differently. It was a budget lacking in compassion. True, we managed to cancel several cuts, but it is a budget devoid of vision. If this policy persists, the Likud will demand that the finance minister be fired. The connection between the Likud and [Lapid’s] Yesh Atid party is causing us nothing but damage.”

Al-Monitor: Is it true that the prime minister promised that within a year you will replace Minister of Culture Limor Livnat as minister, and that’s why you didn’t want to be appointed deputy minister now?

Gamliel: “I am supposed to be a minister within one year of the [January 2013] elections. I have a clear promise from the prime minister that I will be first in line in case changes occur before that, and I believe he will keep his promise.”