In an interview with Al-Monitor, Minister of Social Equality Gila Gamliel stresses the importance of reducing disparities between Arab and Jewish women: "I want to see more Arab women integrated into the labor force and more Arab women pursuing an education." 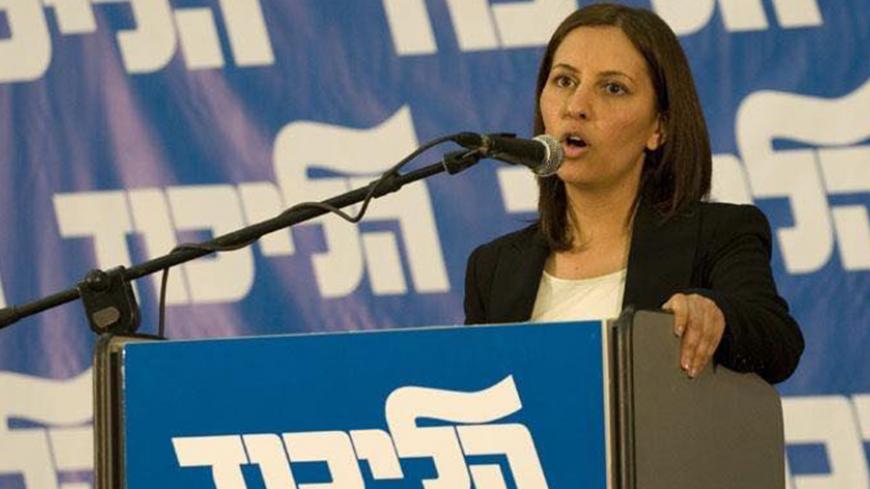 Since she was appointed minister of social equality just a few months ago, Gila Gamliel of the Likud Party has appeared before the Committee to Advance the Status of Women no less than three times. This rate is exceptional, considering her busy schedule, and is about more than just her involvement in the struggle for gender equality. It also has to do with the excellent relationship she has nurtured with that committee’s chair, Israeli-Arab Knesset member Aida Touma-Sliman of the Joint List.

As the first female Arab Knesset member to serve in this position, Touma-Sliman found the Likud minister to be a committed partner in her struggle to reduce the disparities that Arab women have long experienced between them and their Jewish counterparts. For her part, Gamliel found in Touma-Sliman a partner in the liberal spirit of feminism and the effort to advance the status of women overall.

Recently, Gamliel invited Touma-Sliman to participate in a meeting of the Ministerial Committee on Legislation while it was dealing with the advancement of women’s issues. “It was the first time that a female Arab Knesset member ever took part in that forum,” Gamliel was proud to tell Al-Monitor. In a populist atmosphere of Arab and right-wing Jewish Knesset members frequently attacking each other, cooperation between these two talented women from opposite sides of the political spectrum is a refreshing change, well worth noting.

Gamliel is part of the younger generation of women in the Likud Party promoted by Prime Minister Benjamin Netanyahu after the last election. The ministry that she heads handles elderly citizens and issues pertaining to gender and sectoral equality. The 41-year-old mother of two young girls has personally experienced the difficulties women face in Israel as they try to manage a career or even just to earn a living while raising their children. According to her, however, there is a hierarchy even among women facing discrimination, with Arab women at the very bottom of the pack. “One of my goals is to reduce the disparity between Arab and Jewish women,” she said. “That’s tremendously important for me personally.”

Al-Monitor:  In what ways is there disparity between Arab and Jewish women?

Gamliel:  The disparities that I am talking about are measurable, which means that they are very obvious. As of 2015, only 32% of Arab women were part of the labor force, as opposed to 72% of Jewish women. There can be no doubt that this is a dramatic difference. While it is true that there has been a steady increase in the number of Arab women employed since 1995, when it stood at only 19%, it is still not enough. When we remove ultra-Orthodox women from the equation, we find that the difference is enormous. Some 81% of non-ultra-Orthodox Jewish women are employed.

Al-Monitor:  How do you explain this situation?

Gamliel:  There is a reason for this disparity. Arab women face discrimination in the infrastructures of the localities in which they live. They lack a transportation network that would enable them to reach employment centers or to get to universities, where they could acquire a higher education and professional training. The solution to that is quite simple. We have to relieve all the technical impediments, such as the transportation impediment, or build daycare centers that would enable women with young children to go to school or to work. I was amazed to find that all the right decisions had already been made. They simply hadn’t been implemented.

When I entered the ministry, I asked to examine all of the government decisions pertaining to this issue. I discovered that the recent Likud governments made good decisions about everything to do with gender equality and in reducing disparities separating the Arab population in general and Arab women in particular. Nevertheless, previous governments have been unable to implement these decisions. People tend to think that it is all because of money, but you would be surprised. Money isn’t the problem here. There are budgets for this in place.

The problem was that at the time, there was no accurate measuring, verifying, whether all of the resources that were allocated actually reached their destination. Now we have a ministry that oversees all these activities in real time and can ensure that the government’s decisions don’t vanish into thin air.

Al-Monitor:  Are gender differences also impacted by the fact that most of the government’s ministers are men?

Gamliel:  I would assume that there is a connection, and that this is something else that should be investigated. By this I mean increasing the number of women in politics, in both the Knesset and the government. But just like I noted earlier, though positive decisions were made regarding the representation of women as well, we have been unable to implement them.

Let me give you an example. The previous government decided to introduce a gender-based budget, but it was never implemented. I am happy to say that I have managed to get it implemented now, so that for the first time in the history of the State of Israel, the budget will have a gender-based orientation. In other words, every ministry will be required to show how it is advancing gender issues and working to reduce existing gender disparities. That is important, because the gender test should be an integral part of the process of preparing the state budget. It is the infrastructure upon which we can draw operative conclusions and begin the real work of implementing equal rights between men and women.

Al-Monitor:  You are a member of the Likud, a party that has become increasingly extreme over the past few years. Are you concerned that your efforts to advance the cause of Arab women will come back to hurt you?

Gamliel:  I emerged from the Likud Party. I grew up in the movement and was raised on those values. The real Likud of [Prime Minister] Menachem Begin taught the principle of equal opportunities for all citizens of the state. That is our way, and that is my way personally. I cooperate with all of the Arab Knesset members to advance those issues under my ministry as they affect them and the population that they represent. There are plenty of interfaces too.

Al-Monitor:  You are also responsible for senior citizens. Do you think that elderly women are worse off than elderly men?

Gamliel:  Indeed. For a large part of their lives, women cut back on their activities so that they can raise their children, and they lose a decade from their pension. They retire somewhat earlier than men, and their pension savings, if they have any, are very limited. As a result, they retire with much less money and are dependent on their partners.

Dealing with this must begin at an early stage. For example, child care must be recognized for tax purposes. That is one thing that we constantly avoid doing, but it is important because it will enable women to keep their places at work and protect their financial rights.

At the same time, the state of the country’s senior citizens in general, both men and women, is not good either. I want to set a goal for myself that there will be no more poor seniors in Israel. People live much longer these days. We have to prepare for that and take care of them, even by integrating them into the workforce. Some people don’t want to retire, but they are forced to anyway.

I find that the differences in Israel are increasing and becoming more apparent in just about every field. This decline must be stopped.

Al-Monitor:  One political question: Do you think that the coalition is stable?

Gamliel:  It is much more stable than it seems. As a government, we passed a good budget that emphasized social issues, and that budget will pass in the Knesset as well. It is important to understand that the opposition itself is not homogeneous, which is why it is ineffective. Its members do not vote together as a bloc, and there are plenty of disagreements between its various components. For example, both [Yesh Atid leader] Yair Lapid and [Yisrael Beitenu head] Avigdor Liberman support the gas plan. That is why I don’t see any real problems with the coalition’s stability, apart from the inconvenience of having to win votes with a majority of one and the need to always be present in the Knesset plenum.

No matter what the issue is, there are always one or two opposition parties that join forces with the coalition. When you look at things that way and filter all the background noise out, the inevitable conclusion is that the government is stable.