Aida Touma-Sliman, the only Arab committee chair in the Knesset, talks to Al-Monitor about the need for equality, ending the occupation and women's rights. 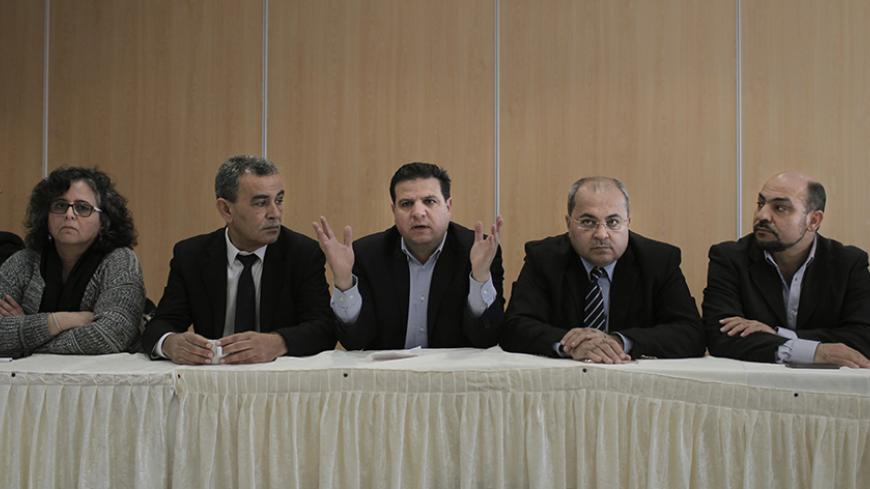 A leading Knesset member of the predominantly Arab Joint List has described press reports of a $3.8 billion budget to improve Arab communities in Israel as exaggerated. In an interview with Al-Monitor, Knesset member Aida Touma-Sliman commented, “Our estimate is that it amounts to nearly 10 billion shekels [$2.5 billion].”

Touma-Sliman further said of the funds earmarked for fixing dilapidated Arab communities, “This is a third of what we had suggested based on a five-year plan that we worked out with our experts that estimated there is a need for 32 billion shekels [$8.15 billion].” She was quick to add that the provision of funds aimed at improving the Arab communities will not water down demands for an end to the Israeli occupation of Palestinian lands.

It has not escaped Touma-Sliman's attention that the third-largest party in the Israeli Knesset and the second-largest opposition faction has only been allowed to lead one committee — the Committee on the Status of Women and Gender Equality — which she heads as the only Palestinian committee chair. She told Al-Monitor that historically, the second-largest opposition faction is given the chair of the comptroller committee, but this was not the case this time. “The comptroller committee reviews the work of the army and is allowed to formally request and question the prime minister. A ruthless campaign prevented us from having that committee.”

Touma-Sliman did not pull any punches when it came to the steep rise of crime in Arab communities, saying, “We have to be honest with ourselves and admit that we have some problems. More than 70% of deaths in our society are from intra-Arab violence and crime.” She described recent calls by Prime Minister Benjamin Netanyahu to curb crimes in Arab areas as “disingenuous,” noting that as long as Arabs were killing Arabs no one heeded the call for years to address the issue. “Once these weapons were used in Tel Aviv, calls were made to deal with the problem of armed crime in the Arab sector.”

Al-Monitor:  Your list reportedly succeeded in getting $3.8 billion in the coming state budget for the Arab population in Israel. How did that happen and what will be the priorities for spending it?

Touma-Sliman:  There have been a lot of exaggerated numbers in the media, and we are not sure exactly what the amount is, since it is in percentages of the budget of different departments. Our estimate is that it amounts to nearly 10 billion shekels [$2.5 billion]. This is a third of what we had suggested based on a five-year plan that we worked out with our experts that estimated there is a need for 32 billion shekels [$8.15 billion]. Reaching this agreement was not easy.

We overcame many obstacles to be able to extract this budget from the government. The government wanted to include East Jerusalem, but we refused, and we are still concerned that some of the ministries entrusted with implementing this agreement might play games with how to calculate the percentages involved in the agreement. We are demanding that actual numbers be part of the agreement. Another area of concern for us is that this is an agreement reached after the approval of the state budget, and therefore it is not mandated by the parliament. We are already seeing conditions being attached to the agreement by the prime minister demanding the loyalty of the Palestinian Arab population, and there are other demands, which include the demolition of unauthorized buildings and the withdrawal of unlicensed weapons and other such conditions that might end up weakening the government's pledges.

Al-Monitor:  At the same time that your faction succeeded in extracting the largest funding ever for Arab communities in Israel, we are witnessing an escalation in racism against Arab citizens. How do you explain that?

Touma-Sliman:  The State of Israel has been under a lot of international pressure in terms of its image and its claims as the only democracy in the Middle East. Israel is also expected, after joining the Organisation for Economic Co-operation and Development in 2010, to provide a more equitable share of its budget to all its citizens. In return, Israel will be using this agreement to put more pressure on Palestinian Arab citizens of Israel to show more loyalty, including pressure to force Arab citizens to do civil service instead of military service. The ministers appointed to oversee this project are among the most right-wing members of the Netanyahu administration, and we expect a huge battle to enforce this agreement in a way that preserves our rights.

Al-Monitor:  Does this struggle for equality in Israel supersede all other issues for Palestinian citizens, or should the struggle to end the occupation take priority?

Al-Monitor:  You are the only parliamentarian in a 13-people bloc to head a committee. Did all Israeli parties conspire against the third-largest list in the Knesset?

Al-Monitor:  As the head of the Committee on the Status of Women and Gender Equality, you have tried to fight for both women’s equality and ending the occupation. Have you been able to do that, and what is the status of the struggle for women’s rights in Israel today?

Touma-Sliman:  I notice that [pro-government circles] are not sure how to deal with me. I am not fighting for the rights of Arab women, because my job as the head of the committee is to fight for the rights of women in Israel from all perspectives and backgrounds with an emphasis on marginalized women. This effort includes working with all ministries and departments of the state, demanding transparency and using the media to bring awareness to the issues of all women. My effort in this area does not exclude the fight to end the occupation and the tremendous effects on both Palestinian Arabs and Israeli Jews, whether directly or indirectly, as a result of the continuation of the occupation.

Al-Monitor:  Palestinian citizens of Israel have regularly protested against domestic violence and the rising number of women getting murdered. How do you see Netanyahu’s Jan. 2 statement about Arabs not obeying the law or respecting law enforcement?

Touma-Sliman:  We have to be honest with ourselves and admit that we have some problems. More than 70% of deaths in our society are from intra-Arab violence and crime. There is of course organized crime that seems to have migrated from Jewish areas to Arab villages. At the same time, it is a known fact, admitted by the Israeli minister of police [Gilad Eran], that 90% of weapons in the Arab sector originally came from the army. Despite our repeated calls for the need to address the problem of crime in our society, there was little attention given to this problem. Once these weapons were used in Tel Aviv, calls were made to deal with the problem of armed crime in the Arab sector. While this is disingenuous, we are certainly in favor of the need to deal with this huge problem, which causes almost daily deaths and injuries from these firearms.

Al-Monitor:  What are your legislative priorities in terms of women in general and Arab women in particular?

Touma-Sliman:  For 25 years, I have been working on issues of women’s rights, and I have always insisted that dealing with this issue requires socio-economic solutions. My legislative priority has been in the area of poverty and the need to deal with all its causes. I am working on legislation that stops schools from barring services and support to students if they are unable to pay even small symbolic fees. Seventy percent of Arab children are under the official poverty line. I am working to help all marginalized groups, among them women, and we have recently noticed that women working in nurseries face difficult conditions, and I am working on laws to deal with this problem.

Al-Monitor:  You have been in the Knesset for seven months. Do you feel that you and your colleagues have had any success in stemming the flood of discriminatory laws, among them the law about funding human rights NGOs?

Touma-Sliman:  We have succeeded in making small adjustments to some of the racist laws that are being presented for a vote. But to be honest, we can’t work alone as a group of 13 members out of 120. Unfortunately, our victory has forced a change in the political map of the opposition. Members of the Zionist Camp — which heads the opposition — have often voted with the government on laws such as the law increasing the punishment for stone throwing and the continuation of the emergency regulations. We might be able to stop the NGO law — which will designate human rights organizations that receive funding from abroad as foreign agents — but our abilities to stop major laws are negligible because of this unholy alliance.

Al-Monitor:  The governing coalition has been stable despite having 61 mandates out of 120, leaving them with a single mandate to spare. How long can it last this way, and has it become a government of national paralysis?

Touma-Sliman:  They have been stable in part because of parliamentary maneuvers sometimes with the Zionist Camp and at other times with Avigdor Liberman and his members [of Yisrael Beitenu]. As the third-largest block at 13, we were hoping we could play a bigger role, but this role has now been taken over by Liberman and his much smaller coalition of six members.

Al-Monitor:  ​Israel is isolated today. Do the government and Knesset realize this, and are they doing anything to address the matter?

Touma-Sliman:  ​They are worried and concerned, and you can feel this in the corridors and even speeches in the Knesset. On Jan. 4, the head of the Zionist Camp submitted a motion of no confidence against the Netanyahu government on the basis of the level of isolation he has caused Israel. In his response, Netanyahu said that relations with Turkey have resumed and that Israel has good relations with China, India and the Americas. Of course, the issue of the EU labeling guidelines and the BDS [boycott, divestment and sanctions] movement is being felt all the time, as reflected by the constant talk about how Israel should respond to them.