In an interview with Al-Monitor, Aida Touma-Sliman, social activist and soon to be Knesset member, explains her long-standing political career in the Arab sector, battling violence against women and promoting coexistence. 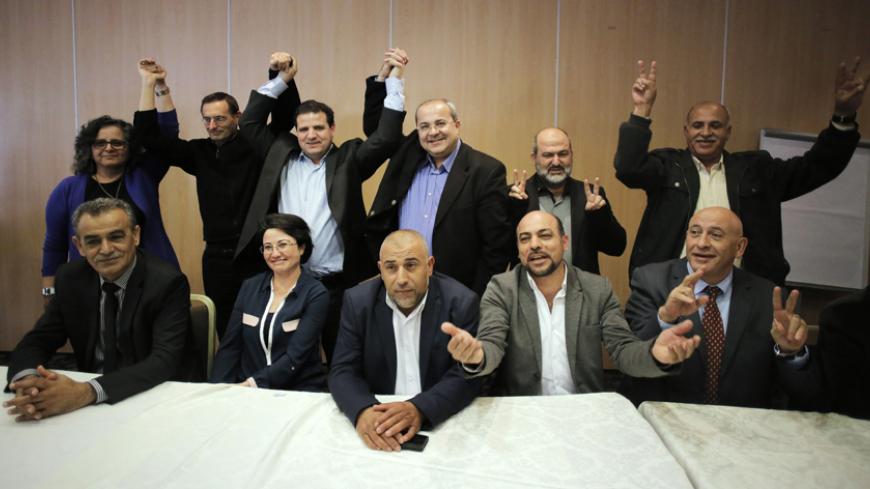 Aida Touma-Sliman (2nd row, 1st L) joins hands with Arab-Israeli parliament members and other candidates after it was announced that a joint political slate of all the Arab parties will be running in the upcoming elections, in Nazareth, Jan. 23, 2015. - REUTERS/Ammar Awad

Among Arab Israelis, Aida Touma-Sliman is a symbol of an independent, strong and assertive woman. For many Israelis, however, she was quite an anonymous figure until she was named second on the Hadash Party slate and fifth on the joint Arab slate.

Touma-Sliman's admirers, who have followed her active and intensive career over the years, including her failed attempts to garner a spot on the Hadash Knesset list, sighed with satisfaction after the March 17 elections. At last, Touma-Sliman will be part of the Arab-Jewish Joint List, which garnered 13 Knesset seats. They are convinced that she will make an active and constructive parliamentarian.

Touma-Sliman, born in Nazareth, is a familiar face within the Arab sector and other sectors as well, due to her long-standing public activity. In 1992, she founded the Arab-feminist association Women Against Violence, serving as its CEO. She was also the first woman on the High Follow-Up Committee for Arab citizens of Israel and the chief editor of the daily Al Ittihad. Political and social engagement have been part of her life ever since her high school years.

In an interview with Al-Monitor, she candidly talks about what she has done so far and has yet to do. She also touches on the attitude of Jewish society toward Arab Israelis, and particularly toward Arab women.

Al-Monitor:  You started vying for your place in Hadash 22 years ago during the 13th Knesset (1992). It has taken you a long time to persuade Hadash of your political skills.

Touma-Sliman:  First let’s start by defining what a political sphere is. If we’re talking about parliamentary work, then yes, it has taken a while. But I’m one of those who believe that politics can be pursued outside the Knesset as well, and I’ve proven it. I was among the founders of the International Women's Committee for Justice Peace Israel Palestine, which consists of 20 Israeli women, 20 Palestinian women and 20 women from around the world. I was among the co-writers of the future vision of the Arab population [document published by the High Follow-Up Committee in 2006]. I was the first woman to serve on the High Follow-Up Committee for Arab citizens of Israel. I was the editor of the Israeli Arab-language Al Ittihad newspaper, so I think that politics can be pursued not only in the Knesset.

Al-Monitor:  In Israel, you were quickly compared to another member in the joint slate, Haneen Zoabi, and it seems to be that you were slightly taken aback.

Touma-Sliman:  I come from a social-communist ideology that believes in Jewish-Arab partnership. But first there’s one thing I’d like to emphasize — I think that what was done to Zoabi was part of the desire of the Israeli public, the Zionist mainstream, to create a scarecrow that can be used to heat up emotions — a scarecrow that can be used to mark a new enemy around whose hatred people can rally. Zoabi has suffered an injustice. In fact, she talks about the injustices suffered by a people under occupation. She talks about the national-civic rights of the Arab-Palestinian population within the State of Israel. She also talks about democratic values and equality within the general population.

It’s possible that she and I have a different style and a different way of expressing ourselves, but in the end we don’t have different political views. We both speak against the occupation and we are both in favor of democracy.

Al-Monitor:  You asked not to be compared to her. Do you think she’s causing damage to the Arab sector?

Touma-Sliman:  I think it’s a fundamental right for anyone engaging in public activity to ask not to be compared to anybody else. And if we’re making comparisons, why not compare me to [former left-wing Knesset member] Tamar Gozansky? We share the same ideological outlook.

Al-Monitor:  Would you like to be compared to her?

Touma-Sliman:  Tamar is a role model. She’s a leader who embraced the same ideology as me. She fought against the occupation and for peace, women's rights and workers’ rights — so it’s an honor for everyone. But my basic wish is that you get to know Touma-Sliman.

Al-Monitor:  Your social and political engagement goes way back. What prompted you to engage in the activity you’re doing today?

Touma-Sliman:  I grew up in a home that believed very much in my power as a human being, not as a woman. I was brought up to be critical, to look at what’s going on around me and ask the right questions, such as "How can this situation be fixed?" It was no coincidence that at 21 I chose to be a communist. When I see an injustice — regardless of gender or national affiliation — it’s obvious for me that I can’t stand on the sideline and just watch. I have a desire to create a better place and environment — for me and for future generations.

I have two daughters. I wanted them to grow up in a society that accepts them better as young women. I wanted them to grow up in a country that treats them democratically. When I enrolled my daughter in kindergarten, I put up a fight when they didn’t want to accept her because the kindergarten close to our home was a Jewish one. I fought hard and she was eventually admitted. I grew up at a time when Hadash won the elections in Nazareth, giving rise to hope that we can make a difference and change things. It all prompted me to look around, ask the right questions and want to make a change.

Al-Monitor:  In this day and age, it seems as if only Arab Israelis openly and proudly talk about being communist. In Israeli eyes, communism has almost become a derogatory term, or a term that’s almost obsolete.

Touma-Sliman:  Communism is starting to be a derogatory term, but Marxism isn’t. I remember my daughter once telling me: “I think it’s easier to be a communist Arab than a communist Jew.” To be a communist on the Arab side is to be part of a group that fought for its rights, defended the Arab population before 1948 until the end of the martial law. It paid quite a stiff price — both as individuals and as a group. I think that the pride emanates from the history of the party in the Arab population, which was also a way of preserving our culture. Al Ittihad and Al Jadid magazine preserved Arab culture during attempts to create the new Arab: The Arab-Israeli who is detached from his national affiliation. And there was also the newspaper of the communist party that preserved that culture. Samih al-Qasim started [publishing his poetry] there, as did Emile Habibi and Mahmoud Darwish.

Al-Monitor:  With your permission, let me touch on a painful topic. Four years ago you lost your husband. Your journey to the Knesset has become today a lone one. Would you say that your loss further drove you to enter parliamentarian politics?

Touma-Sliman:  Yes. I had a partner who is still with me. He was very special and very supportive of my struggles. When I was tired he would always say to me, “Aida, you have a unique voice and people want to hear it. You can’t stand on the sideline.” That always empowered me, and it still does. I spent five months with him during his treatment, and I saw other people with the same problem, but they didn’t have the energy or the knowledge to cope with it. I saw how they could easily get lost in the Israeli health system. Even there, Arabs are treated differently. Four years ago when we were looking for a support group for my family and myself, there wasn’t even a single Arabic-speaking group.

On the other hand, to be a widow in an Arab society has its own status that carries other layers of oppression and discrimination. I used to think — and I still do — about those other women who are more than disenfranchised. How do they go through this process?

Al-Monitor:  On election day, Prime Minister Benjamin Netanyahu warned his electoral base that "the Arabs are coming out in droves to vote." In your long journey during this campaign, I’m assuming that you noticed and experienced the negative sentiments in Israel against Arabs.

Touma-Sliman:  A few weeks ago, during the election campaign, I attended panels at two Ort schools in Acre — one for Jews and one for Arabs. It scared me to see that in my own hometown, Acre, there are many Jews who will vote for [Foreign Minister Avigdor] Liberman’s [Yisrael Beitenu] party — especially in a place that’s being portrayed as a city of coexistence.

Al-Monitor:  When arriving in the Knesset, I imagine that you will bring with you your long and rich experience battling violence against women, fighting poverty and advocating coexistence. I think one could already guess what type of legislation you’ll want to focus on.

Touma-Sliman:  Anything that has to do with workers’ rights. This is something I’d like to tackle — how to help disenfranchised people and not just in the Arab population. You can’t ignore the issue of poverty. It has facets of both class and nationality.

Al-Monitor:  Upon arriving in the Knesset assembly, you will probably find yourself in front of right-wing Knesset members with no holds barred. They now constitute a large majority.

Touma-Sliman:  Don’t you worry. When push comes to shove, I’m a true fighter. I know how to run wars. I’m going into politics to make a change, not to be changed.