Israeli Prime Minister Benjamin Netanyahu's coalition is submerged in a general pre-election atmosphere, where each party tries to score points with its electorate and the media. 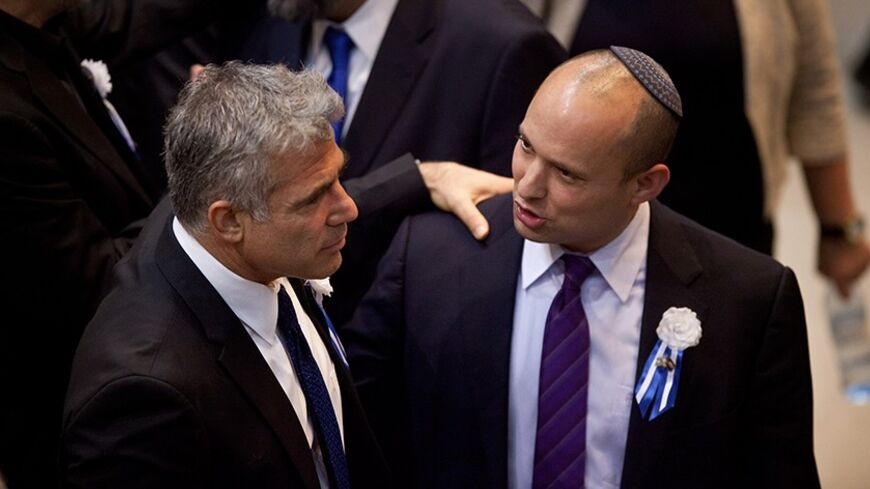 On the afternoon of May 12, just a few hours after the Knesset returned from its spring break, Science Minister Yaakov Peri (Yesh Atid Party) appealed a decision by the Ministerial Committee on Legislation approving the “Murderers Law” initiated by Knesset member Ayelet Shaked (HaBayit HaYehudi Party) and David Tsur (Hatnua Party). The proposed law would have limited the ability to grant clemency to terrorists who committed murder.

In explaining the reasons for the appeal, Peri, former head of the Shin Bet, argued that the proposed law, which enables the court to prevent the president from granting a pardon to terrorists, would harm Israel’s ability to conduct negotiations. He stated that these negotiations were vital to the diplomatic and security interests of the state.

As would only be expected, moments after the news of the appeal was publicized by Yesh Atid’s talented media team, a public quarrel erupted with Knesset members from the two parties. This quarrel culminated in a dire warning from the chairman of HaBayit HaYehudi Party, Trade and Economy Minister Naftali Bennett, that any delay in approving the law would put people’s lives at risk.

“I have not and will not have any tolerance or patience for political games being played at the expense of laws that are vital to the security of the State of Israel,” Bennett wrote brashly on his Facebook page. He then awarded a “mark of shame to Yesh Atid, which has now stopped the advance of a law intended to prevent the release of terrorists.” Other Knesset members from his faction responded by promising to sabotage any future bills proposed by Yesh Atid.

Given the composition of the coalition, the chances of the appeal being accepted are slim. Nevertheless, it was important for Yesh Atid to distinguish itself as a coalition partner that is pushing for a diplomatic process to take place, and is therefore taking a bold stand against legislation to hinder such a process, even if it comes from a party that was considered to be its political ally until just a few months ago. It has been well-established by now that the alliance between party leaders Yair Lapid and Bennett, which was the hottest, most up-to-date thing in politics after the last election, is already a thing of the past. But moreover, this quarrel was also part of the election mood that has been hovering over the coalition for the past few weeks.

Although the alliance between Lapid and Bennett was unexpected, it had the appeal of change and benefited from the aura of the social protests of summer 2011. Lapid and Bennett were able to force upon Prime Minister Benjamin Netanyahu a certain coalition structure, and present a strong — and similar — socioeconomic agenda, at least at the beginning. Inevitably, they were also forced to bear criticism from some of their voters for forging an alliance with an ideological rival.

But ever since this alliance disintegrated, Lapid and Bennett were doing everything they could to shake off the reminders of those days. In other words, there is even more squabbling and tension within the coalition now.

It is hard to believe that only this Passover (April 2014), the government marked a year since its founding, given the large number of conflicting interests, the dissonance, the squabbling, the feuds and the attempts by all the players to mark their unique territories. It is much more reminiscent of a coalition that is counting down until it finally unravels.

The falling apart of the diplomatic process should, ostensibly, have brought some stability and even tranquility to the coalition. After all, the seed of calamity that confronted Lapid and Justice Minister Tzipi Livni with the right-wing forces in the government have vanished, and everyone agrees that the Palestinians were at fault.

The chairman of the governing coalition, Knesset member Yariv Levin, arrived at the same conclusion in closed talks on Monday. He said that the Knesset’s summer session should be a relatively easy one, from the perspective of the coalition, mainly because the diplomatic process has fallen apart, and there is nothing to set the coalition aflame.

But the dynamic that is actually developing on the ground is completely different. That the diplomatic process took place at low intensity, without any breakthroughs or expectations, actually allowed all of the participants to run their affairs in a relatively calm atmosphere, from within the same coalition. Livni, the chairwoman of the Hatnua Party, was up to her neck in an ineffectual diplomatic process, which justified her being part of the government. On the opposite side of the spectrum, Bennett and his right-wing faction could tolerate diplomatic negotiations that weren’t going anywhere. All of the people involved, headed by Netanyahu himself, would gladly sign on for a few more years of negotiations like that.

That is why the absence of diplomatic negotiations, with the specific way in which they were conducted, upsets the delicate balance that Netanyahu’s bizarre coalition depended on since day one. Without one large guiding process, which enables all the sides to sharpen their positions (the diplomatic negotiations were such a case), the parties are left to seek out new ways of bringing to light their agenda and achievements. This immediately makes them jittery.

With the beginning of the Knesset’s summer session this week, the government has switched gears and entered a path that will certainly lead it to its demise, or in other words, to new elections. That is, unless an alternative coalition is formed, but that option does not seem now to be on the horizon.

This election mood, which as we have noted, is only beginning, is being expressed by an increasing number of initiatives and struggles all geared for “the day after.” Though none of the coalition party leaders want early elections, they understand that the dynamics that will lead to elections could occur quickly and unexpectedly.

Take, for example, Livni, who is facing the most troubling political predicament. Since she has no more diplomatic negotiations to oversee, a question mark hovers over her remaining in the government. She returned to center stage just a year ago, serving as Netanyahu’s right-hand person in the diplomatic negotiations. This, in a government that has a clear right-wing orientation, even though she was elected by votes from the left. Very soon, she will be asked what she is actually doing in a government that promotes the Jewish State Basic Law and the Murderers Law.

Meanwhile, Livni is trying to create a constructive presence for herself as the minister of justice. In other words, she is looking for an agenda that will enable her to justify clinging to her chair. On May 11, the Israeli daily Yedioth Ahronoth published a big headline, “The Divorce Revolution,” along with a photo of Livni. According to the plan attributed to the justice minister, Livni wants to introduce dramatic changes to the divorce process in Israel by transferring responsibility for parts of it to family court. In this way, she would reduce the power of the rabbinical courts, which are so loathed by her voters.

It is highly doubtful whether Livni will be able to bring this over-ambitious plan to fruition, which obviously did not remain hanging in an empty space. Her plan has already elicited a sharp response from HaBayit HaYehudi, which has promised to torpedo it.

At the same time, battles over the defense budget are being waged in the press between Finance Minister Lapid and Defense Minister Moshe Ya’alon. Lapid wants to show leadership by refusing to give in to the endless budgetary demands of the Defense Ministry, thus demonstrating loyalty to the country’s civil agenda. He therefore made clear to Ya’alon that if he does succumb to his demands, it would come at the expense of health and education.

Lapid is also holding on as tightly as he can to his housing reform, which is scheduled to go into effect in the coming months. His plan to eliminate VAT on new apartments for young couples who have completed army service will be at the center of his next election campaign. As such, the chairman of Yesh Atid remains indifferent to criticism that the reform discriminates against Arabs and ultra-Orthodox Jews, who did not serve in the army. In fact, he even uses this claim surreptitiously to win the support of his electorate, which considers sharing the burden to be an important banner. “A young person who devoted three years to the country and in many cases put his life at risk is a better citizen,” declared Lapid on Monday in a speech to a forum of the Calcalist newspaper.

Unlike Livni, Lapid is performing much better in the polls. Though he suffered electorally since the last elections, he has nevertheless managed to maintain a significant support base. If and when the cost of apartments drops next year, he will receive credit for it. That will help to rehabilitate him politically.

And where is Netanyahu in all this? Is he ready? Netanyahu, as any of the other players, is not interested in elections, but he also realizes that such a dynamic could emerge in the coming year. According to one assessment making the rounds in the political establishment, Lapid cannot afford to sign another budget based on economic decrees, so that by December he will initiate a process to lead his party out of the government. Elections will then take place in the following May.

In this climate, Netanyahu has gone back to courting the right, his political base. And he does so inter alia by the Jewish State Basic Law, which he intends to promote as soon as he gets back from Japan.

According to senior members of the Likud, Netanyahu believes that with the Likud running separately from Yisrael Beitenu in the next elections, there could well be a situation in which five or six medium-sized parties gain seats. The Likud would still be the biggest party, but not by a large margin. That is why he is interested in changing the precedent of the State Basic Law. He wants to see the task of forming a government granted automatically to the head of the largest party. This, contrary to the current situation where the party head most likely to form a coalition receives this mandate.

That is also how political sources explain his obsession with eliminating the presidency. He is worried that if Knesset member Reuven Rivlin is elected president, he will give someone else the task of putting together a coalition.