Prime Minister Benjamin Netanyahu might decide to advance Likud Party primaries, to assure his position when facing a possible disintegration of the coalition whose partners challenge him from left and right. 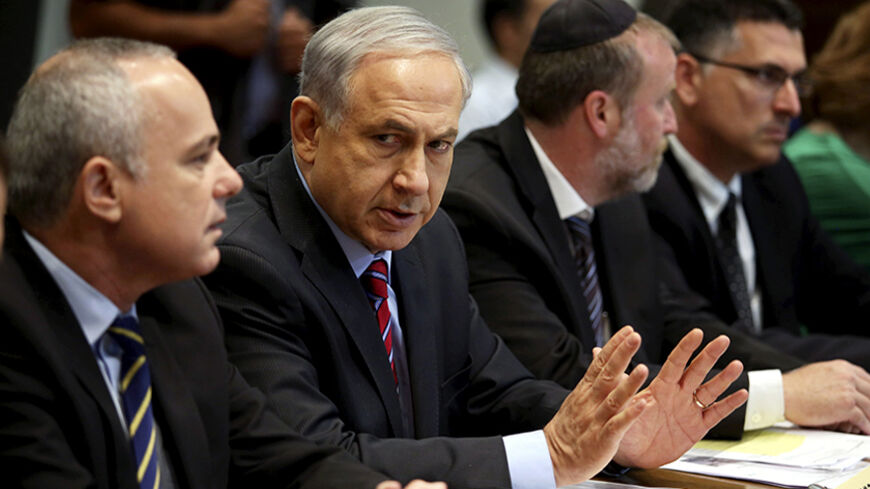 ''The budget is right around the corner, there is quite a lot of work to be done and we need to cope with a very complicated security situation. … There is no reason whatsoever to quit a functioning government, which must deal with very complex challenges.''

It's highly doubtful whether this clear statement by Finance Minister Yair Lapid, in an interview on Israel Army Radio the morning of June 30, had a calming effect on Prime Minister Benjamin Netanyahu. In recent weeks, Netanyahu has been preparing himself for an extreme scenario in which the coalition falls apart over a crisis generated by one of its partners: Lapid's Yesh Atid Party or the HaBayit HaYehudi Party of Economy and Trade Minister Naftali Bennett.

Netanyahu suspects that Lapid, who has recently been initiating more and more points of friction, is actually preparing the ground for a grandiose withdrawal from the government over budget issues. To his right, Netanyahu is following with concern Bennett's internal political activity designed to consolidate his position through changes in his party's constitution. Netanyahu is familiar with his former chief of staff's (Bennett's) aspirations to replace him as the leader of the political right.

In this case, Netanyahu cannot be faulted for his well-known paranoia: Bennett does, in fact, think that after the next elections, given certain circumstances, he could be the prime minister. People who have spoken to him recently are able to say that the chairman of the HaBayit HaYehudi Party has presented a scenario in which elections are held within a year.

That's why no one in the Likud Party is surprised at Netanyahu's attempted rapprochement with the ultra-Orthodox. No one will be surprised, either, if the prime minister does what he has already done twice in the past — advances the primaries for the Likud leadership to be prepared for the worst, as far as he's concerned: loss of control over the coalition and having it disintegrate prematurely, without him being prepared for such a battle.

Netanyahu does not have any organized rivals within the Likud at the moment. But he would like to prevent a challenge by Interior Minister Gideon Saar, who could face him — targeting the leadership of the Likud and the premiership. Netanyahu understands well that as time goes by, chances of this happening increase.

Twice in the past, once when he was opposition leader in 2007 and again at the beginning of 2012, Netanyahu initiated early party primaries even before a date had been set for general elections, thereby ensuring calm on his home front. Many people remember the angry remark by Minister Silvan Shalom in July 2007, who was caught unprepared, that Netanyahu had turned the Likud into the Syrian Baath party. Shalom, who had planned at the time to run against Netanyahu, was forced to shelve his plan.

According to a Likud minister, "This seems like a chronicle of an event foretold, in which Bibi will soon announce that he has decided to move up the primaries for party leadership. He will explain that this is needed to prevent internal bickering at a sensitive period with political uncertainty all around. Even if Saar or Defense Minister Moshe Ya'alon intend to run against him, and this is far from certain, they won't have time to regroup. By so doing, he also chains Foreign Minister Avigdor Liberman to the government and surprises him, as well. This is a classic Bibi [Netanyahu] move, to surprise the enemy. This may result in an embarrassing situation in which he is the only candidate, but he doesn't really care."

Even though Netanyahu's people have in recent days been denying that the prime minister intends to move up the primaries, this buzz keeps spreading within the ruling party and fits in well with the general atmosphere of early elections wafting over the political arena. Netanyahu's intention to invite members of different Likud branches to visit him each week also adds to that same atmosphere, of course.

The first significant crack in the short annals of the third Netanyahu government was the breakdown of the diplomatic process which had enabled all the coalition elements to coexist under one roof. On the one hand, the diplomatic process set the agenda for Justice Minister and Hatnua Chairwoman Tzipi Livni and for Lapid. On the other hand, that there wasn't much progress in the talks did not challenge Bennett and the senior right-wing Likud extremists, and enabled them to get on with their lives in relative calm and enjoy the perks of government.

But as we know, the diplomatic negotiations fell apart, Palestinian President Mahmoud Abbas then proceeded to form a government with Hamas, and Livni and her party started making creaking noises. Although Netanyahu is not concerned about Livni, he takes into account a scenario in which her party's leading members, Minister of Environmental Protection Amir Peretz and Knesset member Amram Mitzna, who are working to sever ties with his government, lead the process of Hatnua's separation from the coalition. Within this scenario lies a sub-scenario in which only half of Hatnua's members (Livni, Mitzna and Peretz) withdraw from the government and the three other members of the Knesset (Meir Sheetrit, David Tzur and Eliezer Stern) remain.

But, as mentioned before, Livni is not the real cause for Netanyahu's headache and his eyes are directed toward the two main coalition fronts: Lapid and Bennett.

Lapid has switched his strategy in recent weeks. He is in the throes of a political process, without a definite end date, which is supposed to rehabilitate his public standing by the next elections. That is why, in his June 8 speech at the Herzliya Conference, he drew diplomatic red lines and branded himself as having a clear diplomatic agenda in the spirit of the political center-left. By so doing, he clears himself of his partnership with radical right-wing elements in government and of the partnership with the darling of the settlers, Bennett.

At the same time, Lapid is working to take credit for more and more social policies. Albeit that the zero VAT law for first-time homeowners is considered controversial, it's also viewed as a courageous move by a politician whose heart is ''in the right place,'' alongside young couples who served in the military but cannot afford to buy a home.

It is in the same vein that on Sunday he lashed out once again at the pay of senior Israeli corporate executives. On the face of it, Lapid needs additional time to reinvent himself after his short tenure in the Finance Ministry. This period caused him grave damage among his voters, who sought a socioeconomic change in the spirit of the summer 2011 protest. That is why it's not inconceivable to suspect that all of Lapid's statements about his hard work in preparing the 2015 budget are nothing but a diversion. And that in fact he clearly understands that he will not be able to put together a budget that will please his electorate. He will then pull out of the government, claiming that in the absence of a significant diplomatic process he no longer believes in it.

On the Bennett front, as previously mentioned, things are not quiet, either: The chairman of HaBayit HaYehudi surprised his party when he revealed on June 23 the changes in the constitution he intends soon to push through the party's central committee. The changes, unsurprisingly so, are designed to consolidate his power and, among other things, enable him to appoint two representatives on his behalf among every 10 candidates for the party's Knesset faction. The reaction within HaBayit HaYehudi Party was stormy. Bennett was met with sharp, public opposition on the part of Knesset members Yoni Chetboun and Moti Yogev, who are accusing him of a hostile and dictatorial takeover. Despite it all, he stands an excellent chance of getting approval for the new constitution. After all, he is almost single-handedly responsible for the return to life of the party in the last elections.

The background noise from Bennett's direction bothers Netanyahu, and rightly so. The latest events could be simply circumstantial, and may not mature into an eventual dismantling of the coalition. But Netanyahu certainly cannot ignore them.

The new roads he has paved toward the ultra-Orthodox are designed to provide him with a backup plan. But even in such a situation there could be one possible scenario in which he would lose control and find himself heading for elections: A Bennett walkout would not necessarily allow him to bring in the ultra-Orthodox due to opposition on the part of Lapid. On the other hand, it will not pave the way for Labor to join the government, either.

On Sunday night, Labor Chairman Isaac Herzog pushed through a change in his party's constitution, somewhat under the radar, which consolidates his position as party chairman in the next elections without having to hold primaries. Herzog feels he is gaining power as chairman of the opposition in the Knesset and building up his leadership potential in the eyes of the public. That is why he would prefer to advance along such a path rather than be ground down as a member of the Netanyahu government. In addition, given the current party structure he will not find it so easy to drag Labor into a coalition with the right wing. For Labor to join the government, Netanyahu will have to conduct more than just pro forma negotiations with Abbas. He will have to present a real diplomatic arrangement, and that's an entirely different opera. The question is whether, for the sake of political survival, Netanyahu would be willing to lead the country to a historic diplomatic agreement.