The resignation of Environmental Protection Minister Amir Peretz accelerated two low-intensity processes: the disintegration of the government and the consolidation of center-left forces, with the objective of creating an anti-Netanyahu bloc. 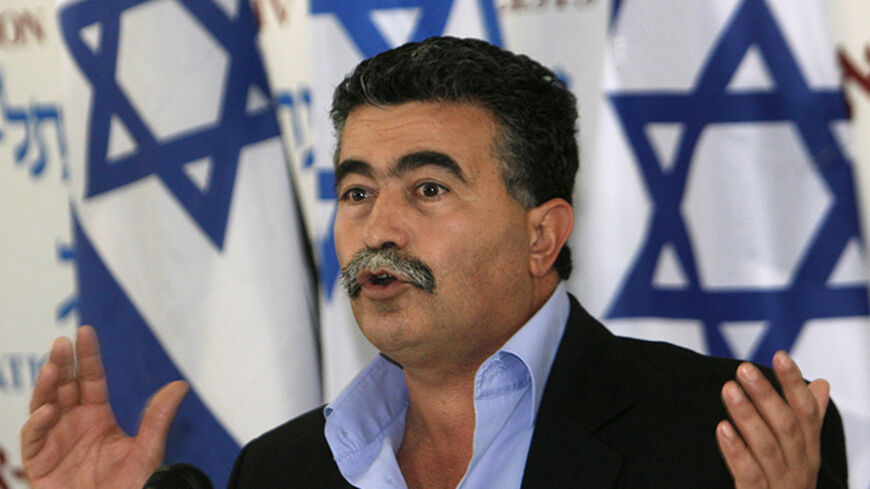 Minister of Environmental Protection Amir Peretz is the second minister to leave Prime Minister Benjamin Netanyahu’s third government within the space of a week. True, Netanyahu and his tottering government managed to contain the Nov. 3 resignation of Gideon Saar, a popular interior minister and Likud member. But the Nov. 9 resignation of Peretz, Justice Minister Tzipi Livni’s partner in the Hatnua Party, is another story altogether.

Netanyahu parted from Peretz with a sarcastic remark at the Cabinet meeting in which the environmental minister announced his resignation. Now, the next-in-line explosions in Netanyahu’s government are only a matter of time. This is expected to be followed by the final collapse of the government, perhaps even in the coming months.

A scenario of elections in the spring — two years after the formation of the current government — is not an imaginary one. It seems to be clear already that 2015 will be an election year.

While Peretz’s resignation was somewhat overshadowed by the harsh reports from the fiery front with Israel's Arabs, the resignation will ultimately be viewed as the reference point where the countdown of the last days began for one of the most bizarre governments we have ever known. The composition of this government was forced on Netanyahu by the unnatural alliance between the stars of the last elections, Finance Minister Yair Lapid and Economy and Trade Minister Naftali Bennett.

Peretz’s resignation has accelerated two parallel processes that had been on the back burner: the disintegration of the government to the point of moving up the elections, and the beginning of a real process of consolidating the left-center forces in the political map.

True, Peretz will remain a member of Hatnua, but it is clear to everyone that the party founded by Livni and that has served as Peretz’s refuge has, like the government, reached the end of the road. Peretz will almost surely rejoin the Labor Party. Now that his bitter enemy, Knesset member Shelly Yachimovich, no longer serves as Labor Party chairwomann, Peretz will be happy to return. In fact, for some time Peretz and Labor Chairman Isaac Herzog have been in contact to determine the outline that would enable Peretz's return. That means that even before he officially joins Labor, Peretz will cooperate with the opposition. In the first stage, he will vote against the budget, and will continue by telling everyone how Netanyahu deceived him by letting him think that he truly tried to reach an agreement with the Palestinians.

And where will Livni go when she resigns? It is quite possible that she will find refuge with Lapid. Livni will help Lapid regain a lost electorate, and he will give her a new home. This may become the consolidation process that will create a center-left alternative to Netanyahu. To top this, Foreign Minister Avigdor Liberman and former Communication Minister Moshe Kahlon will join the festivities after the election, helping to create an anti-Netanyahu bloc to block him. If such a process succeeds, it may well determine that Netanyahu will no longer serve as prime minister after the next elections.

This is no mere imaginary scenario, because henceforth Hatnua leader Livni — who tried to prevent Peretz’s departure — remains the only one on deck. She will have to be a lot more convincing to justify her continued presence in the government, providing more than tortuous explanations about an imaginary diplomatic process, or defending the rule of law wearing the hat of justice minister. From this aspect, Livni’s presence in the government is also on borrowed time.

If Livni needed more proof regarding where Netanyahu is headed, she could find it in the verbal exchange between the prime minister and Peretz. “With you people, if you didn’t evacuate [territory], you’ve not achieved anything,” Netanyahu hurled at him. “All you want to initiate is a jump off the cliff and surrender.” His “you people” refers to the left. Peretz, who was well prepared for this confrontation, answered him, “It’s not right that those who seek a wide diplomatic and international solution, who see a political solution as a central issue, are accused of surrendering to terrorism.”

We cannot ignore the fact that Netanyahu has totally abandoned his statements about a diplomatic horizon and diplomatic process. Instead, he is concentrating on trying to bring back to his bosom the hard-right electorate, which is running away from him toward his main rival on the right: Bennett. Bennett, at his side, strikes out mercilessly at the Netanyahu government’s failed performance. And when Netanyahu feels threatened, he usually beats up the left.

Netanyahu feels attacked and threatened on all sides. When he looks at the faces that peer at him around the government table, he meets the glances of those who want his downfall and hope to inherit his position. On one side is HaBayit HaYehudi Chairman Bennett, as well as Yisrael Beitenu Chairman Liberman, who outflank him on the right. On the other side of the table are Yesh Atid Chairman Lapid and Livni, who is likely to be Lapid’s helpmate in the final overthrow of the government.

And if that wasn’t enough, when Netanyahu shifts his metaphoric gaze to the outside he can see Kahlon, the man who reformed the cellular industry. Kahlon is crisscrossing the country from top to bottom; he reaches the Likud Party strongholds on the periphery that he knows so well, and promises them a better socioeconomic future.

Netanyahu is also aware of the frequent tête-à-têtes held by two of his high-level ministers, Lapid and Liberman. Israeli daily Calcalist revealed on Nov. 9 that the two have met privately for lunch eight times in the last few months. By the way, on the same day of the resignation, the two were glimpsed whispering secrets to one another outside the government session. From time to time, Livni joined them.

Netanyahu, who received information about this in real time, is very familiar with these kinds of threats. He has been living with them since 2013. But he also knows that this week, as a result of Peretz’s resignation, the process has been sped up and he is already in the thick of an election campaign. In this politically explosive atmosphere, a pretext will surely be found soon for dismantling the government.

Therefore, that very evening, when Netanyahu arrived at the Likud central committee meeting, which discussed moving up the party head primaries (a gathering that welcomed him favorably), he continued to delegitimize the left. That, apparently, will be the central motif of his campaign for the premiership. He also attacked Lapid for his performance as finance minister.

There is no doubt that the 2015 elections are here already, and setting the date is only a technicality.