Kahlon to focus on socio-economics, not diplomacy

Having won 10 Knesset seats, Kulanu head Moshe Kahlon plans to focus on social justice issues and will not push the Netanyahu government toward renewing negotiations with the Palestinians. 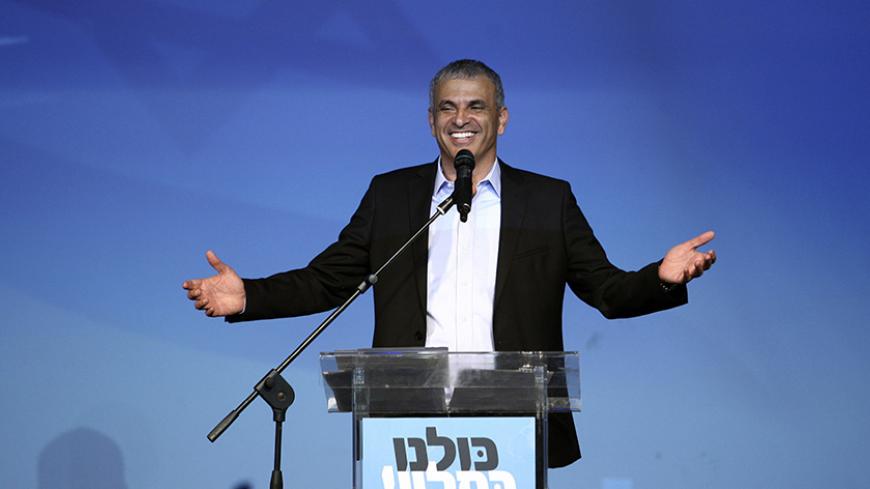 From the day he announced a time-out from political life around two years ago, Kulanu head Moshe Kahlon had not stopped thinking about this moment: the time at which he would join Prime Minister Benjamin Netanyahu for a tete-a-tete and present his demands in the negotiations for assembling a government. On April 12, this actually came to pass, almost exactly as Kahlon had envisioned. Kahlon, who had left the Likud and founded the Kulanu party, returned as a winner. He is expected to be the strong man in Netanyahu’s fourth government and to have great political power, as his laundry list of demands has been almost completely accepted.

The previous dramatic encounter between the two behind closed doors in June 2013 resulted in bitter disappointment on Kahlon’s part. At the time, it became clear to Kahlon that Netanyahu intended to renege on the personal promise he made just prior to the previous elections and would not appoint him chairman of the Israel Land Administration. This promise was made, it seems, for campaigning purposes, to show the public that Netanyahu was committed to solving the housing crisis.

At that moment, Kahlon resolved to return to political life outside the parameters of the Likud. In private conversations, Kahlon talked about Netanyahu’s mendacity and the cynical way the Likud chairman manipulated him before the elections. He said that as long as Netanyahu remained in the Likud, he would not be a part of it. Kahlon promised that he would found a new, independent party that under his leadership would lead a social-economic agenda focused on solving the housing and cost-of-living crises.

Thus the one directly responsible for the founding of Kulanu is Netanyahu. The prime minister further inflamed Kahlon’s already high ambitions by triggering aspirations to prove himself and repair the injustice perpetrated by Netanyahu when he violated his promise to give Kahlon the Land Administration. Therefore, when Kahlon sat opposite Netanyahu as the head of a party with 10 seats that is vital to forming a government, it was for him the closing of a circle.

Netanyahu went to great lengths to break the ice in the meeting. “Moshe,” he told him, “It’s important to me that you succeed. We will do great things together. I will establish a stable government that will serve for four and a half years.” Kahlon, one of the most seasoned politicians on the Israeli stage today and one of the few who can vie with the Likud chairman’s political acumen, remained cool in the face of the prime minister’s warm reception. Kahlon presented a list of demands, calling them his “tools of the trade.” These tools will allow him as finance minister to lead reforms in housing and the banking system and wield control over the Finance Ministry, the Housing Ministry, the Economic Planning Administration and the Knesset Finance Committee. Another demand made by Kahlon was to avoid a too-narrow coalition that could suffer from instability and weakness. This would mean the inclusion of Avigdor Liberman’s Yisrael Beitenu party in the government.

Liberman and Kahlon have been coordinating their moves since long before election season. They held a series of long talks in which they concocted plans for toppling Netanyahu by founding a three-way front together with Yesh Atid Chairman Yair Lapid. This axis was meant to prevent Netanyahu from establishing a government alone and to force Netanyahu or Zionist Camp leader Isaac Herzog to share the premiership in rotation with one of them. But things developed differently. Despite forecasts of a political changeover or significant weakening of the incumbent, Netanyahu rose from the ashes like a phoenix and amazed everyone, including himself, with 30 seats for the Likud.

While the decks were stacked differently this time, it turned out that the Kahlon-Liberman axis remains active and effective in the new political configuration in spite of the collapse of Yisrael Beitenu at the ballot box. Kahlon explained to Netanyahu that without Liberman’s six mandates in the coalition — in other words, with a narrow majority of 61 seats — he would be hard pressed to pass significant reforms and laws, topped by the biennial budget of the next government.

On the morning of April 20, when Netanyahu went to President Reuven Rivlin to ask for a two-week extension to set up his fourth government, the coalition agreements with Kahlon and the ultra-Orthodox parties had already begun to take their final shape. It turns out that Kahlon was able to take full advantage of his 10 seats and special political position. Except for the leadership of the Finance Committee, Kahlon can put a check next to all his demands. Instead of the Finance Committee, he was compensated with the Reforms Committee, which will be headed by a Kulanu member. In addition, it appears that a 67-member government will be formed as he demanded, allowing his friend Liberman to retain the Foreign Ministry portfolio.

Anyone who expected to assign Kahlon the left-center diplomatic banner of the new government is likely to be disappointed. While it is true that the designated finance minister believes, in general, that the government ought to aim for a political settlement with the Palestinians, he also thinks that there is no one to talk to at this time. While Kahlon is not in his element as far as diplomatic issues are concerned, his ideological roots are firmly planted in the right-wing worldview of his political home, the Likud. In addition, in the past Kahlon had sided with the opponents of the 2005 Disengagement Plan from the Gaza Strip, and operated among the Likud rebels as a close associate of Minister Uzi Landau. Since then, no real change in his diplomatic views has been made public.

Moreover, ever since Kahlon was appointed to the role of communications minister in 2009, he based his public and political stature on his role as the bearer of the social justice flag. He cast himself as the man who came to right the wrongs of yesteryear, and labored toward this goal alone. He focused completely on his objectives and was careful not to let himself get sucked into other issues. It is important to remember this in order to understand that Kahlon has no interest and no intention to be a diplomatic left-center support prop in a right-wing ultra-Orthodox government. The fact that he paved the way for Liberman’s continued tenure as foreign minister and that he did not make significant mention of diplomatic issues in his recent meetings with Netanyahu are early practical indicators of this inclination.