Why Israel's left can't depend on Finance Minister Kahlon

Reading into statements by Finance Minister Moshe Kahlon should clarify to the Israeli center-left that he has never deserted the right-wing. 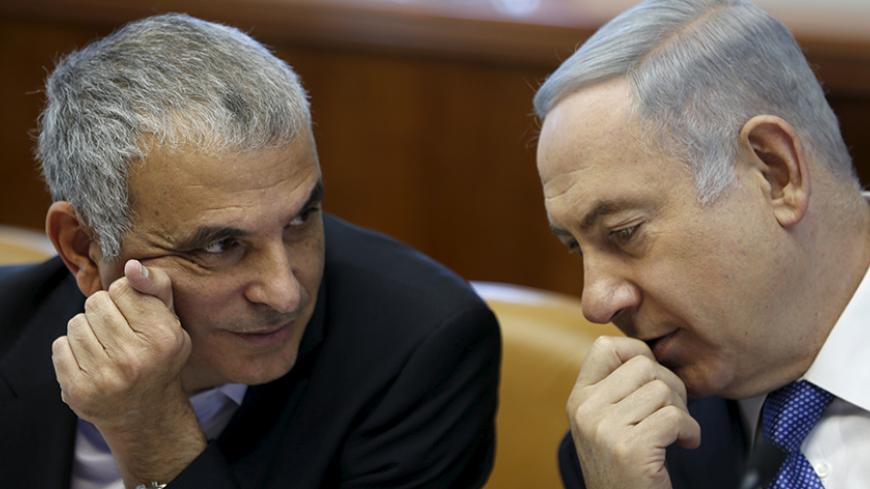 “With Kahlon and Lapid, we’ll be able to bring down Netanyahu next time,” a senior member of the Zionist Camp told Al-Monitor on condition of anonymity July 3. This seasoned political wolf believes that the political system is ready to spew out Prime Minister Benjamin Netanyahu, and in his opinion, all that is needed is to transfer a few mandates from the right-wing bloc to the left.

This left-wing politician counts Finance Minister and Kulanu Party Chairman Moshe Kahlon in the left-wing camp. And that is a mistake. True, Kahlon, a former Likud member, is the social-justice banner carrier in the government. True, the lion’s share of voters for Kahlon are moderate right-wingers — who many people call “the old-time Likud.” It is also true that Kahlon never forgave Netanyahu for causing him to leave the Likud in October 2014. Like former Likud Ministers Moshe Ya’alon and Gideon Saar, Kahlon also has personal motives to bring down Netanyahu.

These motives, combined with moderate political statements on Kahlon’s part regarding the importance of the diplomatic process and the need to enlarge the government by bringing in the Labor Party, caused the left to err. Time after time, they automatically counted Kahlon in the center-left “bloc” — in other words, on their side.

But eventually, this is nothing more than wishful thinking, or an illusion. Kahlon has never crossed the ideological divide. He was — and remains — a right-winger. Therefore, he will always prefer a right-wing government by default. In other words, Kahlon will not be the one to take the initiative in bringing down a right-wing government. But the desperate left will not allow facts to confuse them.

A reminder of the finance minister’s ideological bent came just the day after the optimistic forecast by the senior Zionist Camp member, when Kahlon joined the criticism heard by the right in regard to intentions to build hundreds of housing units for Arabs in Jerusalem. “We have no choice, we must build, and build a lot [for Jews]. Unfortunately, there is a freeze on construction in Jerusalem right now [for Jews] … we have to change this broken record. We stop building, and they are murdering,” said Kahlon emphatically. It was as if he had never left the Likud, demanding that Netanyahu return construction authorization to him to build in Jerusalem — with Kahlon almost appointed as head of the Israel Land Administration.

The news headlines were not long in coming. Predictably, the question was asked whether Kahlon was taking a turn to the right. So it seems that Kahlon’s modus operandi confuses the media as well. In the last election campaign in March 2015, Kahlon sought to benefit from the votes of the right, center and left political blocs. That’s why he avoided referring to diplomatic issues. Instead, Kahlon clung to his popular social-justice campaign. Only when he had no choice did he make very general, unclear statements on diplomatic issues — declarations that all sides could accept.

Kahlon also presided over an extensive web of tight contacts and connections with all the political players that wanted Netanyahu’s downfall. These included Defense Minister Avigdor Liberman and Zionist Camp Chairman Isaac Herzog, who for a time appeared to have a shot at the premiership. Herzog and other Zionist Camp seniors then confidently counted Kahlon’s Knesset mandates as if they belonged to their camp and assumed that he would help them change the regime. They ignored Kahlon’s strong sentiments for the right and the Likud, and erased from their memory Kahlon’s intensive activities in the Likud rebel group that opposed the 2005 Gaza disengagement. That was the reason late Prime Minister Ariel Sharon left the Likud and founded the Kadima Party.

At that time, Kahlon was more than just a mere rebel. He was the right-hand man of the rebel leader, former Minister Uzi Landau. During the period of the uprising against Sharon, Kahlon used to issue sentences such as this one in June 2005, “The prime minister will have to think twice about evicting civilians against their will, and he will be forced to conduct a referendum first.”

The Zionist Camp also ignored the strong connections he had with right-wing extremists in Judea and Samaria. In fact, Kahlon’s chief of Cabinet in the Welfare Ministry was Michael Fuah, the CEO of one of the most extreme and combative right-wing groups in the Likud: Moshe Feiglin’s Jewish Leadership Movement.

In the last elections, Kahlon could have prevented Netanyahu from forming a government. But he made the natural choice — as far as he was concerned — and was the first to sign on to a coalition agreement with the Likud. Zionist Camp leaders Herzog and Tzipi Livni did not understand at the time that Kahlon would never allow his votes to be used to thwart the establishment of a right-wing government. Doing such a thing would be an act of political suicide. The right would have simply crossed him off the list.

Inklings of the next election campaign seem to be in the air — for Kahlon as well as for many other players in the political system. Kahlon is focusing his efforts on lowering housing prices, so he will not be the one to dismantle the government before he has the chance to show an important achievement to the public. Simultaneously, Kahlon is not disconnected from the right-wing nationalistic sentiment that rules the public. Kahlon sends out signals that he is definitely in that place, exactly as he did on July 4, with his statement on building in Jerusalem.

As opposed to Yesh Atid head Yair Lapid, Kahlon does not have to make an effort to prove he is right wing. Kahlon has been right wing from birth, and he has never abandoned the camp. The game of hide and seek that he plays with the left-center has served him in the past, and it will continue to benefit him politically in the future. As a shrewd, seasoned politician, Kahlon will make sure that the left will continue to count him in. This does not necessarily mean that he will not join a left-leaning government. For such a scenario to come about, it would have to involve a political situation in which Kahlon is not the one to cause the right-wing government to fall.

At this point in time, the Zionist Camp should focus on building a large left-center camp. Only afterward can they count on Kahlon. True, that is a more complex and difficult route, but it is the only way to change the regime.