Time for Israeli left to reassess after election failure

The Israeli left blames periphery voters for Prime Minister Benjamin Netanyahu's victory, instead of admitting that it was the Zionist Camp leadership that failed to attract public support. 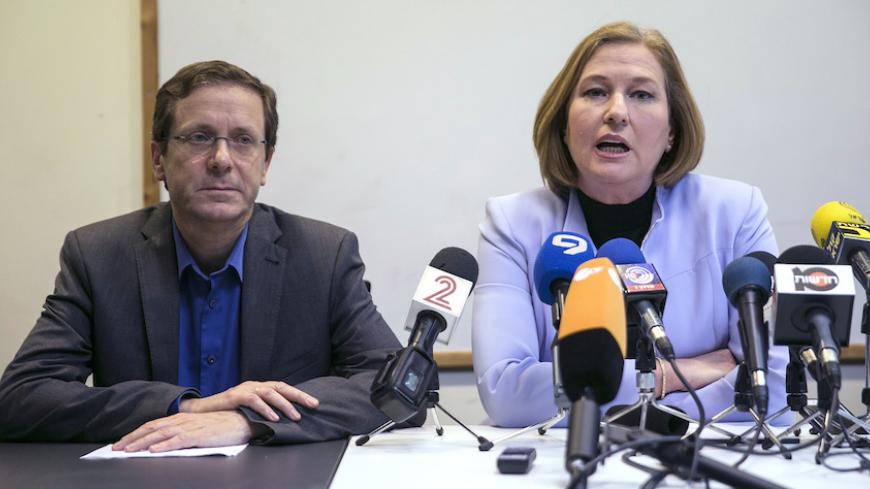 Isaac Herzog and Tzipi Livni, co-leaders of the Zionist Camp, deliver a statement at the party headquarters in Tel Aviv, March 18, 2015. - REUTERS/Baz Ratner

When highly regarded author-actress Alona Kimche used her Facebook page to call everyone who voted for right-wing parties “Neanderthals” and suggested that they drink some cyanide, she was expressing to some degree a prevalent attitude in Tel Aviv and other left-wing bastions. People there were stunned to learn that Likud leader Prime Minister Benjamin Netanyahu had defeated Isaac Herzog and the Zionist Camp. Kimche later removed the remark, explaining that it was posted in “the heat of the moment,” but the sense of bitter disappointment will linger in those areas within Israeli society for a long time to come.

One spontaneous initiative from the left that has been trending across the Internet in the days since the election has been to point a finger at people living in the traditionally impoverished and peripheral development towns, which were built to house previous waves of immigrants, who voted for the Likud en masse. Many Internet users who have been spreading this message called for an end to donations and other signs of solidarity with the weaker sectors of the population identified with the right.

The virulent outrage of these responses underscores the high expectations of left-wing voters this time, convinced, just as they were in 2009, that a government turnover was right around the corner. While this explains their disappointment with the results, such extreme reactions are childish, condescending, and in the case of Kimche, borderline racist.

The left can hardly complain about the economically distressed populations when its foremost party, the Zionist Camp, never decided whether it had a social-democratic orientation, as advocated by Shelly Yachimovich, or a neoliberal bent as represented by Manuel Trachtenberg. In that sense, even if those underprivileged voters wouldn’t vote for the Likud, Moshe Kahlon’s Kulanu Party or Yair Lapid’s Yesh Atid provided a more sensible alternative than the Zionist Camp.

Instead of wagging a finger at the leaders who failed to bring them victory, the left is acting in a condescending manner toward Likud voters. This is, of course, a big mistake. Without votes from the center-right, it will be impossible to put together a center-left government in Israel. That is why the Zionist Camp played down its diplomatic platform during the campaign, and promised not to partition Jerusalem. They hoped that co-leader Tzipi Livni, a former member of the Likud and scion of a militant Revisionist Zionist family, could draw voters away from the Netanyahu camp and disrupt the balance between the two blocs.

But that didn’t happen, and it wasn’t the fault of Likud voters either. It was because the Livni-Herzog alternative wasn’t convincing enough and avoided making any clear, decisive statements. The same “Neanderthals” were responsible for the 1992 turnover, because they were convinced that Yitzhak Rabin was the right leader, and the turnabout in 1999, which brought Ehud Barak to power.

And so, in the 2015 elections, the diplomatic left suffered a resounding blow. Israelis voted en masse for Netanyahu, who disavowed his Bar Ilan speech. They did not consider desperation and anger to be enough of a platform. On the other hand, there is still widespread support for a diplomatic arrangement with the Palestinians throughout Israel, even among Netanyahu supporters.

The Likud leader’s achievement was remarkable. About 1 million Israelis — almost one out of every four voters — chose to give him another term, even though everything seemed to be against him until the last moment, and powerful forces were lined up to oppose him. A large part of the Israeli public, including many Likud supporters, was fed up with Netanyahu. On the other hand, there was no credible alternative with which to replace him. All that was out there was an ad hoc platform cobbled together in time for the elections. It was an artificial construct and lacked a clear agenda. Herzog is a very deserving public figure, but he failed to win public support.

Furthermore, the facts show that analyzing the victory with a focus on weaker sectors of the population living in the periphery is actually a mistake. The Likud retained power also with the support of well-to-do, educated voters living in the big cities. No one can argue with the numbers. The Likud led the race in all the big cities apart from Tel Aviv and Haifa.

Once the surprising election results are processed, people will come to terms with the fact that a new nationalist coalition and government will be set up in Israel within the next few weeks without the participation of any party holding center-left diplomatic positions. It will then be important to recognize that this is not necessarily bad news for the left. For the first time since the Likud government under Yitzhak Shamir in the 1980s, a staunchly right-wing government will be formed. Being forced to create an alternative is the best thing that could have happened to the center-left, especially after its leaders spent so many years serving as a political fig leaf for staunch right-wing opponents of the peace process. The Labor Party provided just such a fig leaf for Netanyahu when it joined his government in 2009, while Tzipi Livni did the same by joining Netanyahu’s government in 2013. In both instances, no progress was made in the diplomatic process. Whatever was there was only for show.

While it is not even up for discussion at this point, it would be a dramatic mistake by the Zionist Camp and Yesh Atid to join Netanyahu’s fourth government. Deciding to join the coalition would delay any chance of a political turnover for many years to come.

Anyone who followed the recent elections and understood the intensity of the public’s antipathy toward Netanyahu recognized that if he had been faced with a good alternative, able to win greater trust among Likud voters, it is quite safe to assume that the turnover would have happened now. In that context, it is also worth noting that Herzog’s choice to join forces with Livni, who probably would not have crossed the voter threshold had she run on her own, may have won him votes from the center and the left, but it had seemingly also scared off potential Likud voters. Once they realized this, the Zionist Camp tried to hide Livni, while focusing all of its attention on Herzog. In the end, however, even the best campaign tricks in the world cannot replace a viable platform.

The hasty merging of Herzog and Livni right before the elections was entirely artificial. Livni, who served as a minister in Netanyahu’s Cabinet until three months ago, when she was fired, was never perceived as fresh blood, or as reliable for that matter. It’s a fact. When examining the actual numerical results, too, it looks as if Herzog and Livni, who received 24 seats in this election, essentially won back what they already had: the 15 seats of the Labor Party; Hatnua’s six seats; and the two seats of Shaul Mofaz’s Kadima Party. While they picked up some seats from Meretz along the way, they also caused that party to almost collapse. In other words, the public that did not identify with the left-wing bloc could not be convinced that it had anything fresh to offer to replace Netanyahu. Now is the time for the center-left to realize that until it builds a viable alternative leadership, it will never return to power.