With the spirit of the 2011 social justice protests still alive, Yesh Atid head Yair Lapid succeeds in overcoming the negative image of his performance as finance minister, and gathers momentum ahead of the elections. 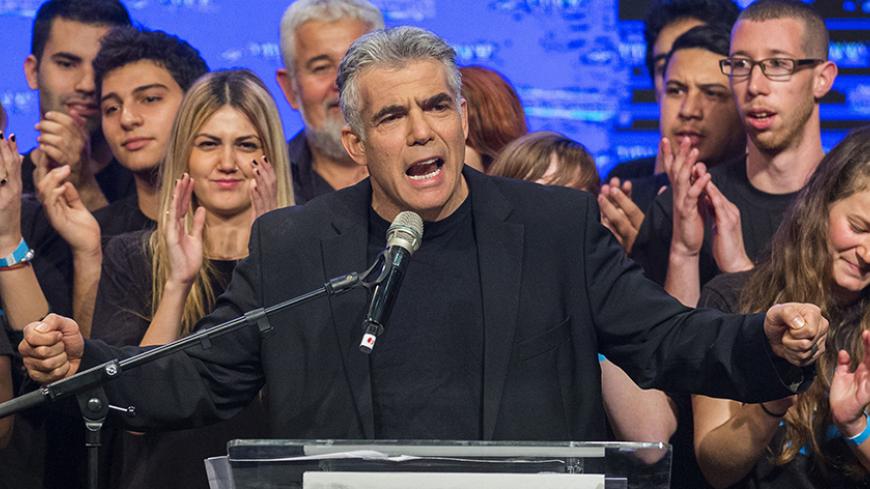 Yair Lapid, the Israeli MP and head of the center-right Yesh Atid Party, delivers a speech outlining the Yesh Atid campaign and presenting the party's list for the 20th Knesset in Rishon Letzion, ahead of the March 17 general elections, Jan. 26, 2015. - Getty Images/Jack Guez

Some of the key Israeli political parties ran internal polls at the end of February, to examine the effect of the state comptroller’s report on the failure of the housing crisis. These polls repeatedly had interesting data regarding Yair Lapid’s Yesh Atid Party.

The right-wing parties — the Likud, HaBayit HaYehudi and Yisrael Beitenu — showed a weakening trend, and the votes did not remain in the right-wing bloc. And contrary to expectations, Moshe Kahlon's social justice Kulanu Party, with its right-wing Likud orientation, did not increase its strength significantly. It turns out that the votes have been seeping to the party of Lapid, finance minister until December 2014.

This constitutes an average increase of about two seats for Yesh Atid compared with previous surveys, but it also indicates an interesting trend: the flow of seats from the right-wing bloc to Lapid, who is viewed as a key player in the left-center bloc. If this flow of votes continues, it could prove to be significant the day after the elections. In internal surveys conducted by Yesh Atid’s American pollster Mark Mellman, the party is now third in size with a projected 14 seats, and its support has grown at the expense of soft center-right (mainly Likud) voters and former fence-sitting undecided voters. According to Mellman, the growth potential has not yet been exhausted.

But that's not all. Even the Zionist Camp, headed by Isaac Herzog, has noted that voters are seeping away from it and toward Lapid. This is the reason the Zionist Camp decided to shift some of its campaign fire to him as well. Over the last few weeks, the Zionist Camp has found itself somewhere between barely holding its own and suffering a certain amount of erosion. Zionist Camp seniors are worried because according to their calculations, they must win at least four seats more than the Likud to be asked by the president to form the next government. Meanwhile, Zionist Camp co-chairs Herzog and Tzipi Livni have not succeeded in attracting right-wing voters to their list; the additional seats they are projected to pick up are from the left-wing bloc, mainly the leftist Meretz Party.

Meanwhile, Meretz is dangerously close to the electoral threshold. If it does not cross that threshold it will not enter the Knesset and tens of thousands of left-wing votes will be wasted. Therefore, at this point it is clear to everyone in the left that the potential pool of seats for the Zionist Camp is to be found in Yesh Atid. This is the reason for the combined attacks directed at Lapid in recent days: The Zionist Camp sent Knesset members Stav Shaffir and Itzik Shmuli, representatives of the social protest movement, to attack Lapid in his soft underbelly. In an interview with the Israeli daily Calcalist, Shmuli accused Lapid of deceiving his constituents after he “presented himself as someone supporting the protest, but then represented a completely opposite policy.” Shmuli’s attack was approved by the party’s campaign managers who had avoided doing so previously because of their expectation that Lapid would recommend Herzog for the premiership.

There was even a media-covered brouhaha on the evening of Feb. 28 between the two parties. The cause was an elections clip disseminated on the Internet, ostensibly from the Zionist Camp, calling on the public not to vote for Lapid since he would definitely join a Benjamin Netanyahu government. Yesh Atid's response was not long in coming. Party members attacked Herzog directly because he and Livni did not commit themselves to a refusal to join a Netanyahu government. Lapid, who until now had not been a target of almost any party, has recently found himself also under fire from the direction of Kahlon, chairman of Kulanu. But it does not appear that the negative campaigns against Lapid are working.

The achievement of the Yesh Atid chairman is impressive. Only three months ago, Lapid was fired from the Finance Ministry by the prime minister. Lapid is viewed as a great disappointment among the voices of the 2011 social justice protest movement, and he received only one-digit support results in the polls at the end of 2014. Thus, the person who scored the lowest in regard to public satisfaction of the overall functioning of the ministers is now in the midst of an amazing comeback. If this comeback continues, it could end up as the surprise of the 2015 elections.

How did he do it? Lapid is a disciplined campaigner and a gifted speaker. He has been operating in recent weeks like a well-oiled public relations machine. The former treasury minister submerged himself into the social networks and is a strong presence throughout the country in the large assemblies he organizes. Lapid also blames Prime Minister Netanyahu for terminating the zero-VAT law, Lapid’s initiative for lowering housing prices.

We will never know if this controversial law, which was denigrated by high-level economists, would have really lowered prices or only worsened the situation. Still, Lapid (and his people) can freely blame the prime minister for the current situation. Thus, he also manages to dodge the negative effect of the state comptroller’s report that examined the failure of the housing crisis and found many shortcomings in the conduct of Netanyahu’s government. Lapid, who was finance minister for almost two years in that same government, managed to avoid being the focus of criticism.

In the current election campaign in which great forces in the political and media-based systems are operating to replace Netanyahu, it is easy for Lapid to find a receptive ear to his version of blaming Netanyahu, even though it is clear to everyone that he made severe mistakes during his term of office. He talks about how Netanyahu attempted to trip him up at the very beginning by maneuvering him into the Finance Ministry during a period of budgetary cutbacks. Simultaneously, with regard to the diplomatic sphere, the Yesh Atid chair still juggles the two political camps: to right-wing voters he hints that he would go with Netanyahu, and to the left-wing public he says there is no chance he would sit with the Likud.

In the intense anti-Bibi atmosphere, Lapid managed to hide the fact that after the 2013 elections, he was the one to force Netanyahu to bring Economy and Trade Minister Naftali Bennett and his radical right-wing party HaBayit HaYehudi into the government. Lapid has managed to deflect public opinion away from the fact that he was a senior minister in a government mired in political stagnation and marked by deterioration of relations with the United States. Why is Lapid receiving a second chance from so many voters? Probably because he is successful in convincing the public that he had good intentions, and that his first attempt was nipped in the bud. But even more than that, he succeeds because no other alternative candidate has arisen in the last two years, able to sweep the public as he did — and this, while the social justice protest atmosphere still blows in the wind, searching for charismatic leadership to lead it.