Prime Minister Benjamin Netanyahu and other politicians react to polls that indicate a growing trend over the past few elections, where an increasing number of voters remain undecided until they arrive at the ballot box. 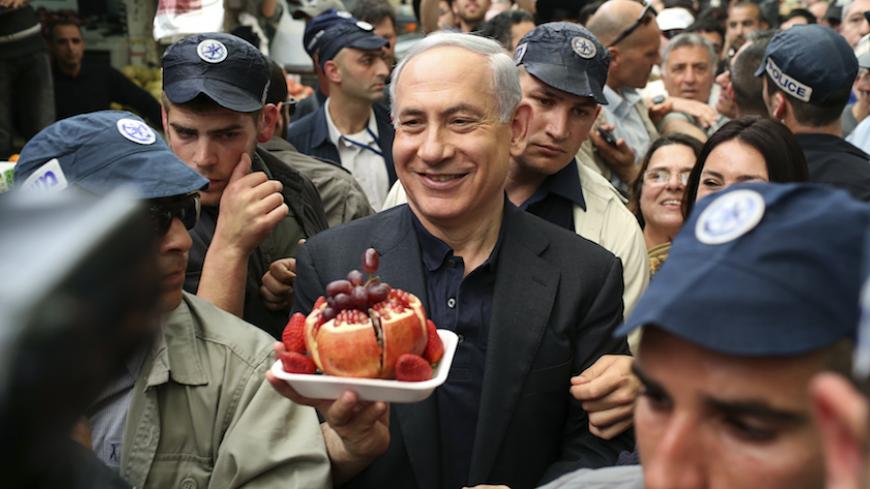 There was only one reason for Prime Minister Benjamin Netanyahu’s surprise visit to the Mahane Yehuda souk in Jerusalem on March 9. Although the market is traditionally viewed as one of the Likud’s strongholds, many veteran Likudniks have abandoned their home base for Moshe Kahlon’s Kulanu Party. Netanyahu’s visit was aimed at bringing these voters back into the fold.

Six years have passed since Netanyahu last paid a visit to the souk, when he was chairman of the opposition. Now, in the final sprint of the difficult race for his fourth premiership term, Netanyahu returned to the role of eager suitor over what was supposed to be the base of the Likud electorate. Armed with Knesset member Miri Regev — Netanyahu’s bargaining chip for wooing traditional Mizrahi populations — the prime minister attempted to garner votes that in the not-so-distant-past were viewed as a done deal. These are voters who, once upon a time, could be counted on to cast their votes for the Likud at the moment of truth at the ballot box, even when they were perhaps angry at the party.

Perhaps this little sally returned a certain percentage of the electorate to the Likud. But Netanyahu, a seasoned politician and an expert at reading the polls, also knows that this is not about big numbers. Still, from his point of view every small effort is worthwhile at this stage; after all, his controversial speech in Congress halted the hemorrhaging of votes, and according to the polls returned between one and two seats to the Likud.

According to surveys leading up to the March 17 elections, no party has crossed the bar of 25 seats thus far. The two leading parties — the Zionist Camp and the Likud — have been running neck-and-neck for several long weeks with a slight advantage to the former. Any slight change in voting patterns could determine which party finishes first, providing a certain advantage in the attempt to assemble a government. Therefore, it is interesting to track the messages, rallies and visits of the Likud chairman these days. These show us exactly from where Netanyahu hopes to accumulate more votes in this trench warfare.

When Netanyahu circulates in the souk, it is a sign that the Likud has absorbed a harsh, perhaps even critical, blow from the shift of votes to Kahlon. The Kulanu campaign, “Love the Likud but vote Kahlon,” is aimed at making it emotionally easier for fence-sitting traditional Likud voters to vote for another candidate this time. Such behavior could be perceived as betrayal or violation of a long-standing family tradition. Kahlon’s identity as a Mizrahi who came of age in the Likud also helps them to take this step.

But Netanyahu has many other battles to wage. One of them is vis-a-vis the HaBayit HaYehudi party headed by Naftali Bennett, often viewed as the Likud’s sister party, with regard to its right-wing diplomatic ideology. This is the reason that Netanyahu visited settlements Eli and Maale Adumim in this campaign — to return a seat or two to the Likud, and away from Bennett.

The trickle of votes from the Likud’s traditional electorate to other right-wing parties or to Kahlon’s social justice party, is a mirror view of what is taking place on the other side of the political map. The Zionist Camp, founded ahead of the elections on the basis of the Labor Party, is trying to retake its natural voters that migrated to the Yesh Atid Party headed by Yair Lapid, which has a strong social-justice orientation. On the other hand, the Zionist Camp continues to try to ''bite'' into the electorate of Meretz, the veteran left-wing political party.

Under these conditions of the current election campaign, we anticipate great volatility within and even between the blocs. This phenomenon, often called “shifting sands,” refers to an electorate that has no party loyalty and instead switches its political home, even several times in one election campaign. This phenomenon was well expressed in the 2013 elections in which Lapid attained 19 seats; thus these elections can be viewed as a watershed. Although on the morning after the elections the commentators tended to blame the pollsters, one must bear in mind the extenuating circumstances. It is very hard for pollsters to craft precise voting forecasts in the light of such a manic migration of votes.

The pollsters’ mission is complex and complicated also because the younger generation, from age 30 and down, is viewed as an elusive electorate when it comes to polls. There are several reasons that it is a difficult group to measure and quantify: Members of this group are less accessible to survey institutes because they tend to have cellular phones and not landlines, but mainly because they lack party loyalty. In the not-so-distant past, the survey institutes used to segment the floating votes via questions such as, “Who did you vote for last time,” “What is your ethnic origin” and “Where do you live.” Today, mainly with regard to the young voters, these questions are almost irrelevant.

Menachem Lazar, from the Panels Politics Institute that prepares surveys for the Knesset Channel and the daily Maariv, explained to Al-Monitor that the most prominent characteristic of Israeli voting patterns in recent years is lack of party loyalty. People vote primarily to the crux of the matter or for a person. He said that recent activities adopted by the right and left alike to drum up votes will have great influence. “Even if it just ‘strengthens the convinced’ it helps, because every vote counts,” Lazar said. “Especially under a ‘shifting sands’ reality you need to take action to stabilize the voters on your side. Therefore Netanyahu’s trip to Washington, addressing the US Congress on March 3, achieved its political goal. We saw in the polls that he halted the downward spiral and that’s no trivial gain, because we know that it’s a lot harder to return people who have already left the fold.”

About the ability of polls to provide accurate predictions in a reality of dynamic voting patterns, Lazar said, “Lapid’s rise in the 2013 elections took place in the last four days, when it is forbidden to publicize election polls. We saw this happen, with every passing day Lapid’s party simply grew. I anticipate that as we approach the election date, and on Election Day itself, we can get closer [to predicting the truth]. There is still a lot of uncertainty regarding the Arab parties, as these can alter the distribution of mandates [Knesset seats]. Should the voting percentage in the Arab sector rise drastically, it could cause a situation in which parties like Meretz on the left and Eli Yishai [Yachad party] on the right will not cross the electoral threshold. At this point in time we witness signs of higher voter turnout in the Arab sector, but we cannot assess how far it will go. If they reach 15 mandates, that could definitely influence the political map.”