According to a US survey of Israeli voters, security considerations tipped the scale and Prime Minister Benjamin Netanyahu won once again for his reputation as a strong leader. 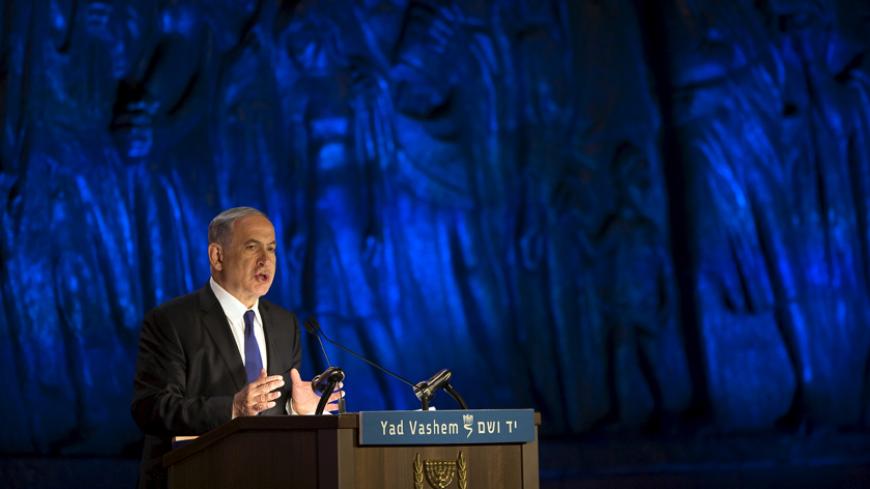 A month has passed since the elections and the dust is starting to settle over the results that shocked the Israeli political system and numerous observers around the world. The findings of a new survey verify the analysis published here in Al-Monitor the day after the elections. True, Prime Minister Benjamin Netanyahu managed to transform a gap of a mandate or two in the polls into an advantage of six seats in the voting booths in two days. But aside from this sweeping victory, nothing else really happened and the balance of electoral power in Israel underwent a minor change in favor of the center-left bloc. The Israeli public did not shift to the right, the inter-bloc balance sheet barely changed and the main power distribution remained as it was. The only thing that did change is that Netanyahu managed to gobble up votes from the Likud’s satellite parties, while Zionist Camp leader Isaac Herzog did not.

The survey was conducted by American pollster Jim Gerstein together with David Eichenbaum, who together comprise the professional staff of the New Majority organization. New Majority endeavored to replace Netanyahu, and the organization became well known during the weeks before the election in Israel mainly via veteran Israeli strategist Eyal Arad. Gerstein is intimately involved in the Democratic Party and is viewed as one of the disciples of veteran American political strategist Stanley Greenberg, who was part of former Prime Minister Ehud Barak’s professional staff when he overcame Netanyahu in 1999.

Below are some of the more prominent findings of the survey, which polled 1,133 Israelis who voted in the elections (a significant number, considering the size of the Israeli electorate):

1. An enormous number of Israelis, 28%, decided for whom to cast their vote on election day itself, with 15% deciding who to vote for en route to the poll booth and another 13% deciding in the “last days before the elections.” This percentage is anomalous by any criteria: an unprecedented number of Israelis decided who to vote for only days before the elections or on Election Day itself. These fateful days were during Netanyahu’s media blitz, in which he employed his “secret weapons,” telling everyone, “The Arabs are streaming to the poll booths in droves.” He warned against Herzog and Zionist Camp co-leader Tzipi Livni’s post-Zionism and leaned heavily on the security ticket and the rising threats facing the country. For the sake of comparison, in the US presidential elections of 2012, only 3% of the voters made their decision on the last day, and another 6% decided in the last few days, a total of 9%. Of the “last day” deciders, 25% voted for the Likud and only 11% for the Zionist Camp. In total, 62% voted for right-wing parties, 16% for left-wing parties and 21% for centrist parties.

2. The overall voting percentage rose significantly. About 10% of the 2015 voters had not voted in the 2013 elections. Of them, 35% are Arab-Israeli voters, 47% are Jewish right-wing voters and only 17% are center-left voters. This phenomenon is fascinating because while it increased the effectiveness of the “obstructing bloc” against Netanyahu (due to an increase in Arab voters), it also increased Netanyahu’s advantage among the Jewish population. Another conclusion by Gerstein and Eichenbaum was that while the enlarged Jewish electorate in the recent elections has indeed leaned a bit more to the right, it has not become more religious. The characteristics of the “new Jewish voter” are “young, male, Sephardi [of Middle Eastern origin], traditional and of a low education level,” state the survey findings.

3. A significant number of the 2013 constituents of Likud Beitenu, the joint Likud and Yisrael Beitenu parties list, moved to the center-left bloc in 2015. However, the Likud managed to make up the difference and even increase its power by luring quite a few voters away from Naftali Bennett’s HaBayit HaYehudi, Shas and Avigdor Liberman’s Yisrael Beitenu. The Likud lost six mandates to the left, which was supposed to cost it the government, but the Likud tipped the scales in its favor by bringing in voters from other sources, such as 25% of “new” Jewish electors who voted Likud, while 19% voted for the Zionist Camp. Of Bennett’s voters in 2013, 21% voted for the Likud this time. Of Yair Lapid’s voters, 14% shifted their votes to the Likud. (Herzog succeeded in attracting 26% of Lapid’s constituents in 2013). All in all, Lapid lost 40% of his electorate to the Likud and the Zionist Camp (and dropped from 19 to 11 mandates). Netanyahu also managed to rake in 8% of the electors who voted for Shas in 2013.

Yesh Atid head Yair Lapid merits a separate remark: The race between Herzog and Netanyahu inflicted strategic damage on Lapid. My personal assessment is that Lapid’s voters from the “soft right” returned to Netanyahu, and those of the “soft left” returned to Herzog. At the beginning of the race, Lapid competed against Tzipi Livni and afterward tried to create an alliance with Kulanu head Moshe Kahlon because he knew this was the only way he could break the two-headed race framework. But he failed.

4. According to this poll, Israel’s right-wing parties (including Eli Yishai’s Yahad, which did not cross the electoral threshold) garnered 49% of the votes, as opposed to 51% by center-left parties. This poll places Kulanu (7% of the vote) in the center-left camp, since most of Kahlon’s constituents voted for center-left parties in 2013. Thus Kahlon’s party is the tie-breaker for any coalition, any way you look at it. A meticulous analysis of Kahlon’s constituents shows that they do not support Netanyahu. Of them, 39% define themselves as centrists and 35% as members of the “soft right.” And Kahlon’s constituents are almost evenly split with regard to the question of which government Kahlon should join. This is an amazing fact, in light of Netanyahu’s decisive victory in the elections.

According to the pollsters, Kahlon’s electorate is comprised of the most important group, politically speaking, since they are the ones containing the seeds for a change, the ones who determine the balance of power between the blocs. More findings regarding Kahlon’s voters include that only 30% of them give a “positive” score to Netanyahu’s performance as prime minister. On the personal index, Netanyahu receives a score of -17 among Kahlon’s constituents, while Herzog receives only -1. Only 15% of Kahlon’s voters feel that Netanyahu “fights for the middle class” and 24% feel that they share his values. By way of comparison, 30% of Kahlon’s voters feel that Herzog fights for the middle class and 30% feel that they share the same values. Of Kahlon’s voters, 72% want a substantive change from the route led by Netanyahu in recent years and 53% feel that Israel should decrease its investments in the territories (with 37% thinking investment should remain as is).

So why did Netanyahu win the elections? Despite his average-to-poor ratings from the voters, Netanyahu is still viewed as a strong leader (66%) versus Herzog (24%) and at the end of the day, the security issue is what tipped the scales. Of the voters who found the security issue the most important one, 79% voted for right-wing parties. Thus the Israeli left is still unable to give the voters a sense of security and the belief that it can be safely entrusted with the rudder of the Israeli ship in stormy waters.

At the end of the day, it all has to do with the candidate. Isaac Herzog is a worthy, talented candidate and an effective politician. However, he does not give the voters a sense of security. Netanyahu, with all his complexities, still holds the security scepter with a strong hand. The aversion to his modes of action, his values and his social and economic insensitivity is less strong than the security worries posed by a nuclear Iran, inroads by the Islamic State and a Middle East in flames. And that's the long and short of it.