Could a centrist politician be Israel's next PM?

Yesh Atid head Yair Lapid is working to attract the support of the Israeli political center, but it seems that he is not the only one aiming at this constituency. 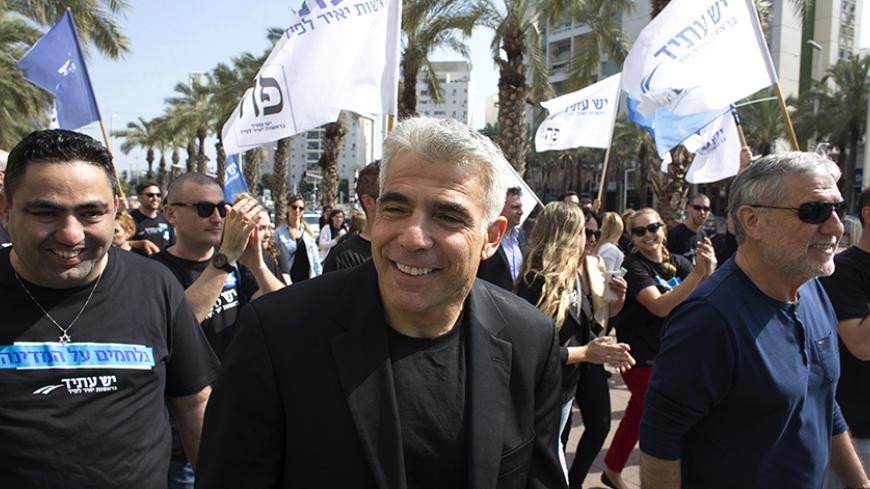 At the beginning of August, a comprehensive study on changes and trends in Israeli public opinion was prepared for Yesh Atid Chairman Yair Lapid by his American strategic adviser, Mark Mellman. Mellman is the one who created Lapid’s successful strategy in the 2013 elections, thus attracting 19 mandates to his party. In the current study, Mellman was asked to produce findings that would sharpen Lapid’s strategic line in a way that would transform him into the only alternative to Prime Minister Benjamin Netanyahu and right-wing rule.

While conducting his research, Mellman predicted Lapid’s giant leap in the polls and the transformation of his party to the largest one in the polls. This prediction was indeed confirmed later in a poll by Channel 2, published on Sept. 6. In addition, Mellman’s assessment was that Lapid has even greater potential than that.

According to Mellman’s segmentations, about 53% of the Jewish Israeli public is in the political center, or on the right and left margins of the center. This is a tremendous pool of votes that can achieve about 40 mandates. Go to the political center, Mellman advised Lapid; aim for it, because that’s your route to the premiership. Mellman also pointed out the Israeli public’s rising distaste of the horse-trading politics that is identified with Netanyahu.

Lapid, an obedient campaign soldier, is now working hard to brand himself as the leader of the Israeli political center. He’s neither left nor right; he’s in the middle, in a giant supermarket of opinions and hues that includes religious Jews, secular Jews, settlers and left-wingers, too — each of them can find something there with which they can identify.

These numbers pointing to an enormous repository of votes in the political center are not new. We recall the mythological “center party’’ headed by retired Gen. Yitzhak Mordechai and the late Gen. Amnon Lipkin-Shahak that was founded in 1999 in order to bring down Benjamin Netanyahu’s government in his first term of office. The new party soared high in the polls to about 30 mandates, but then crashed in the elections to merely six seats.

In all of Israel’s political history, Kadima is the only party that succeeded in transforming the center dream into a reality. But even this instance had a painful ending. The political explosion generated by late Prime Minister Ariel Sharon at the end of 2005 when he split up the Likud was meteoric and promising. Sharon, prime minister at the time, succeeded in connecting strong left-wing forces to him headed by former President Shimon Peres, the man who never stopped trying to advance the two-state dream. After the disengagement from the Gaza Strip and North Samaria at the end of 2005, Sharon planned additional painful, publicly speaking, diplomatic moves in the West Bank.

A few days after the dramatic announcement regarding Kadima’s political birth, Peres joined the party and it rose to almost 40 mandates in the polls. It seemed to have the potential for even further growth. Of course, Sharon’s leadership skills explained a large part of the party’s success, so when the prime minister collapsed due to a stroke and Ehud Olmert replaced Sharon in the prime minister’s chair, some of the votes evaporated.

The Kadima Party garnered only 29 mandates in the 2006 elections, but that was still viewed as a big achievement, and Kadima continued to be the ruling party. Then, Olmert’s criminal entanglements and internal party conflicts served to deliver the final deathblow to Kadima in its last 2015 elections (in which it did not run).

However, the potential of votes in the Israeli center has not disappeared. It is still alive and kicking, waiting for someone to realize its potential in the coming elections.

While the trend in the political center in 2006 was a lean to the left, 2016 sees a slight right-wing orientation. Lapid is aware of this, and he acts accordingly. Lapid does talk about a diplomatic solution, but with great caution. He does not wave the flag of partitioning the land as did Olmert in 2006 with the Convergence Plan. Instead, Lapid’s Seven-Point Plan that he presented on Sept. 18 — a plan derived from Mellman’s research — is a diplomatic agenda that includes regional cooperation with countries like Saudi Arabia, Egypt and the Gulf emirates.

This week, Lapid discovered that he is not alone in the playing field. Haaretz political commentator Yossi Verter revealed news of a meeting held in New York between former Prime Minister Ehud Barak and Zionist Camp co-leader Tzipi Livni (former foreign minister for the Kadima Party).

Barak and Livni met at the Clinton Global Initiative meeting that took place on the fringes of the 71st session of the UN General Assembly. They discussed various political scenarios; both of them are worried and envious of Lapid’s meteoric rise, feeling that the time is ripe to bring down Netanyahu.

The two of them are trying to understand how Lapid, a former journalist, is so successful at sweeping the centrist public off its feet. Recently, Livni has been trying to organize open primaries in the left-center bloc to choose the person who will lead the bloc, but she is not getting much support from the people involved. Lapid has already made it clear that he’s not in the running. In a radio interview on Aug. 11, he made it clear that Yesh Atid will not run with the left.

Barak is trying to jump-start a political comeback. In recent weeks, he has taken it upon himself to be the prime minister’s security-issues challenger. But Livni and also Barak, together or separately, are viewed as has-been politicians — though under certain circumstances they may still be attractive to the public. Lapid’s associates maintain that he has no intention of joining up with Barak or Livni and that the tete-a-tete between the two in New York holds no significance for him.

However, it is reasonable to think that a large centrist party (like Yesh Atid) that joins forces with Livni and Barak from the left, former Defense Minister Moshe Ya’alon and Finance Minister and head of the Kulanu Party Moshe Kahlon from the right, and former generals like Gabi Ashkenazi and Benny Gantz could carry away the Israeli public that, according to the polls, is fed up with Netanyahu. These are the 53% that Mellman pinpointed in his research.

The big, intriguing question is, Will forces in the center (and from its left and right) succeed in maximizing their potential this time around? Much depends on Lapid and his capabilities as head of the largest party in the bloc to combine forces with parts of the right and also with parts of the left, such as the Zionist Camp. Much also depends on Ya’alon; it is still unclear whether he will found his own party or remain in the Likud, and whether he would agree to be No. 2 under Lapid.