Labor head Avi Gabbay and Yesh Atid leader Yair Lapid both know that to win the premiership they must add a prominent ex-general to their Knesset lists. 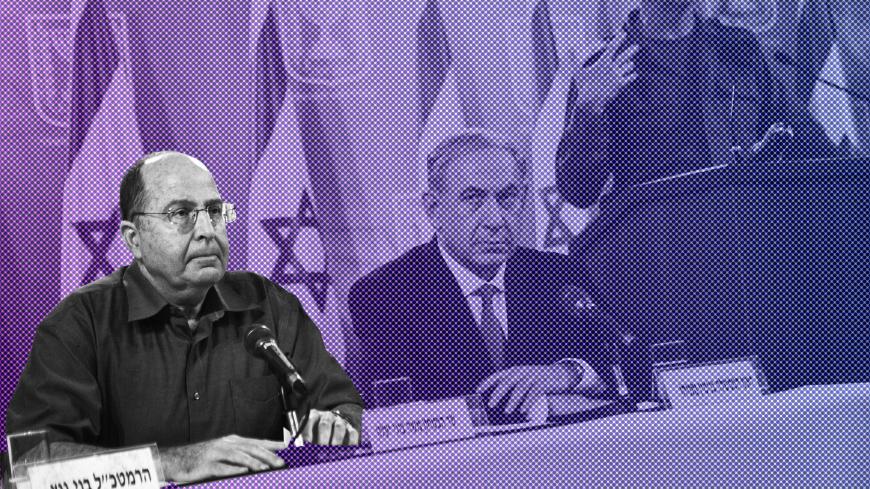 Yesh Atid Chairman Yair Lapid and former Defense Minister Moshe Ya'alon have gotten into the routine of holding regular meetings between just the two of them, sometimes as frequently as twice a month.

Lapid usually shows up at Ya'alon's office in the Ramat HaHayal neighborhood of northern Tel Aviv and meets with him behind closed doors. Ya'alon's secretaries already know how Lapid drinks his coffee, and the mood is like a meeting of old pals, trying to find the ideal formula that would allow them to cooperate as soon as a new election is announced.

Ya'alon has been steering an independent political course ever since Prime Minister Benjamin Netanyahu deposed him as defense minister in May 2016. He immediately became the subject of intense courting by Lapid, whose greatest political weakness is his lack of experience in security affairs. In Israel, election campaigns are ultimately determined by security issues, even if momentous economic, social or civil issues are also hanging in the balance.

Ya'alon is a former right-wing chief of staff and defense minister who served in key security positions for the past three decades. In other words, he is a hot commodity when it comes to security affairs. Just one day after he left the Defense Ministry, Lapid was ready to close a deal with him, which would have had them running together in the next election. The problem was that Ya'alon is ambitious. He sees himself running at the head of a list, and that is the one thing that the Yesh Atid chairman is unwilling to concede him.

Despite this, the two men and their advisers have maintained a close relationship ever since. They exchange political briefings and assess various scenarios and alliances for the "big day" — the day the next election campaign is officially launched and of their attempt to overthrow the ruling Likud Party headed by Netanyahu.

While Ya'alon continues building a political platform, raising funds and putting together his own list, Lapid is trying to close a deal with him. Ya'alon's response to Lapid will depend on the former defense minister's position in the polls before the next election, after he officially announces the creation of a new party. If he succeeds in gaining momentum, he will prefer to consider a political alliance only after the election.

As far as Lapid is concerned, the deck was reshuffled last July when Avi Gabbay beat all the odds and won the Labor Party primaries. This caused Yesh Atid enormous damage in the polls. For a long time, Lapid had been able to position himself as the main candidate of the center-left in the race against Netanyahu and the right; then Gabbay popped out of nowhere and passed him. Now there are two parties of roughly the same strength on the center-left: Yesh Atid and Labor. And their two leaders share the same weakness: a lack of experience in security affairs.

This became apparent just two days after the Labor Party's internal election in July. Lapid watched the impressive public interest garnered by the new Labor Party leader in startled disappointment and attempted to present himself as the better security candidate. In an interview with Channel 2 on July 12, he said, "Gabbay is a nice guy, but he has no idea what a Cabinet looks like. I know and I care."

The derisive responses were quick in coming. Lapid was depicted as someone whose experience in security affairs could be summed up in the time he spent as a member of the security Cabinet — less than two years — simply because he was finance minister. It was also noted that the period included Operation Protective Edge, whose management and results are considered controversial. As such, Gabbay's response to Lapid was forthcoming: "Bad experience is not a good thing."

Gabbay and Lapid are now competing over who can get a former chief of staff to be their "No. 2" on security matters — a vital addition to each party's list in an election campaign against Netanyahu. They don’t have many options. Ya'alon is also being courted by Gabbay, and the two of them have a very cordial relationship. Gabbay abandoned the Netanyahu government in May 2016 to protest the removal of Ya'alon as defense minister and his replacement with Yisrael Beitenu Chair Avigdor Liberman. On the other hand, the relationship is not as intense and close as the relationship between Ya'alon and Lapid, since Gabbay is still dealing with infighting within his party. Lapid, on the other hand, is the sole and undisputed leader of Yesh Atid.

On Sept. 14, Gabbay is expected to pass a series of amendments to the Labor Party constitution, including an article that will allow him to choose four candidates for the party's Knesset list in the next election. It is most likely that he will try to offer the first of these slots to a popular, senior security figure. In private conversations, Ya'alon admits that he appreciates Gabbay but would find it hard to be part of a party with a left-wing diplomatic agenda.

Another person being courted in this race is former Chief of Staff Gabi Ashkenazi. Ashkenazi was one of Israel's most popular chiefs of staff, attributed with refurbishing the Israel Defense Forces (IDF) after the Second Lebanon War. Ever since he completed his term in 2011, he has had a love-hate relationship with the idea of launching a political career. While he has an aversion to party mechanisms, he has not rejected the possibility of jumping into the fray if he thinks it would have some real value or a chance to replace Netanyahu.

Lapid has been trying for years to recruit Ashkenazi for Yesh Atid, but to no avail. The chances of Ashkenazi joining the Labor Party are also very slim. In contrast, Ashkenazi has a very close relationship with Ya'alon. The two chiefs of staff have had a warm relationship ever since Ya'alon supported Ashkenazi in the Harpaz affair (involving fake documents and several top IDF officers, including then-Defense Minister Ehud Barak).

In talks with his associates, Gabbay has promised to bring a chief of staff into the party. One name that is frequently raised in this context is former Prime Minister, Defense Minister and Chief of Staff Ehud Barak. He supported Gabbay in the primaries and has often complimented him. Barak, himself a former chair of the Labor Party, has met frequently with Gabbay in the past few months, but as far as is known, there is no maneuvering underway to bring Barak back into the party. It is, however, possible that this will only happen closer to the next election, since that will make it easier for Gabbay to contend with the many Labor Party members who despise Barak ever since he served there.

The race for a former chief of staff preoccupies senior politicians to the extent that the name of Shaul Mofaz, the former chief of staff and defense minister — who left politics when his Kadima Party disappeared from the political map two months before the 2015 elections — also came up and was considered by Gabbay and Lapid.