Has race to Israeli premiership begun?

After quitting the government, former Defense Minister Moshe Ya'alon declared that he will run against Prime Minister Benjamin Netanyahu at the next elections. 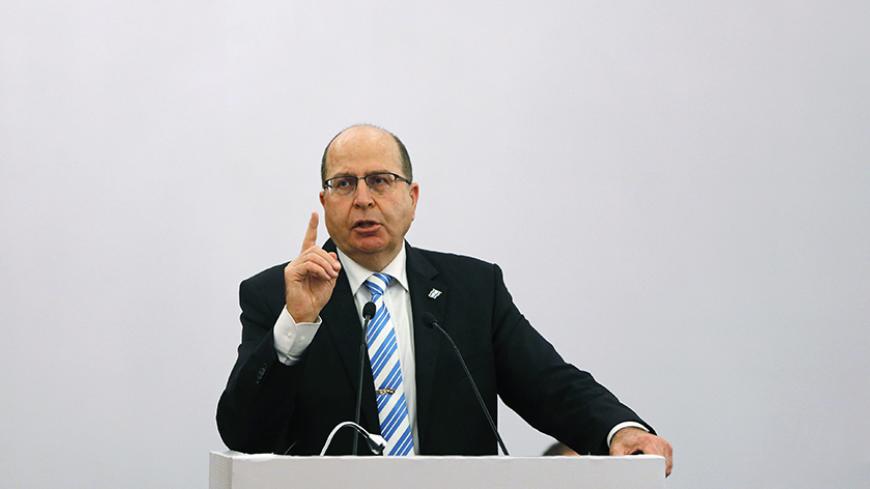 Former Defense Minister Moshe Ya'alon hasn’t officially left the Likud, but it is only a procedural matter. Soon he will announce the establishment of a new right-wing party, at the head of which he would run for the job of prime minister in the next election. Ya'alon’s party will appeal to the so-called sane, right-wing and liberal electorate, but also to the heart of the political center that is now controlled by Yesh Atid leader Yair Lapid.

Lapid has been soaring in the polls over the past few months, predicting that he would win 20 or more seats in the Knesset. Thus, he started establishing himself as an alternative to Prime Minister Benjamin Netanyahu. But then came Ya'alon’s dismissal from the Ministry of Defense and the game opened up again.

Talks among figures close to Ya'alon and Lapid that took place in recent days were meant to feel out options for cooperation, but they reached a dead end: Neither of them is willing to be the other’s No. 2. This means that if neither one concedes, in the next election they will compete for the same set of votes on the center-right — so neither one will succeed in creating a large party — and once again, the votes that are supposed to create a political revolution will be divided.

It’s still early to know how things will pan out, since the election isn’t yet on the horizon and the Netanyahu government seems stable, but these very days the next electoral campaign is already shaping up.

As happened in the last election in March 2015, an alternative to Netanyahu will try to be put forth, but the big question is who will lead it? In the last election, the votes on the center-left were divided between Yesh Atid and the Zionist Camp — a situation that eventually gave Netanyahu the victory. But will another, new form of political center of gravity be formed ahead of the next elections? Will the winds of change that started to blow at the Herzliya annual conference, a stage for Israel's top politicians to present their worldviews, and the revulsion at Netanyahu, lead all the forces to join together to achieve their goal? For now, at least, that's not the direction things are going.

What we saw June 16, when Netanyahu was attacked from all directions — former Prime Minister Ehud Barak with his call to bring down the government with a popular protest at the polls and Ya'alon with his announcement that he will vie to lead the country — was in effect the opening shot of the race to lead the alternative to Netanyahu.

Although Barak later said in an interview for Channel 2 that he does not intend to run for prime minister, all his actions point to his wish to be called on by the public to return. Barak’s recent appearances are actually trial balloons he’s releasing among the public. Sharp, sarcastic and eloquent, Barak presents the most logical alternative to Netanyahu. The issue is that Barak doesn’t exactly have a place from which to return, and there’s a huge gap between his seniority and abilities and his public support. When he quit political life in 2012, polls predicted that the Atzmaut party he headed wouldn’t pass the vote threshold to enter the Knesset. More than anything, he was also tainted by a long-standing and very close partnership with Netanyahu.

Ya'alon, on the other hand, is a new player who is gaining popularity, and therefore very interesting and important. His leaving the government and going out on his own gives him a tail wind among the public that wishes to change the government. He has a good starting position, but the minute he establishes a party he will also be exposed to the public’s fickleness, to exhaustion and to attacks from the Likud Party and Netanyahu, which could damage him. He would have to explain his long-standing partnership with the dangerous Netanyahu, who divides and foments discord among the public.

According to information that has reached Al-Monitor, Ya'alon is already working and getting ready to build up party operations, through meetings with advisers and pollsters, and creating a volunteer network throughout the country. Lapid seems worried about this development, since thus far he has enjoyed the weakness of Zionist Camp leader Isaac Herzog and Herzog's party, and acted as if he, Lapid, were the chairman of the opposition. The moment Ya'alon entered the arena, the game changed and Lapid is no longer alone in the field; whether they want to be or not, Lapid and Ya'alon will soon become rivals.

When the political center starts to heat up, it is no surprise that Knesset member and Zionist Camp co-leader Tzipi Livni also smells an opportunity. In her speech at the Herzliya conference she informed the public that she will soon present a plan to create a centrist democratic bloc. In all recent election cycles, Livni was a player in attempts to replace Netanyahu from within the political center. In the last election she did so as Herzog’s No. 2, and once again was on the losing side. Now it seems that her Hatnua Party's partnership with the Labor Party headed by Herzog has come to an end, and Livni knows that she has to recalculate her route.

In the political frenzy of recent days, the names of former Chiefs of Staff Benny Gantz and Gabi Ashkenazi were also mentioned as people who might join the move to depose Netanyahu. But Gantz’s cooling off period, a set time before someone can run for office after leaving military service, will last another three years, and Ashkenazi hasn’t yet decided if and when to jump into political waters.

The Labor Party, beaten and humiliated, stands watching these developments, and it too will join the battle to pose an alternative to Netanyahu — no matter who leads it.

To conclude this past week, we can say that there are many potential prime ministers who wish to depose Netanyahu inside the political establishment and outside it — the question is whether at the moment of truth all this energy will translate into a unified political alternative. The road ahead is still long.