Head of the newly founded Israel Resilience Benny Gantz claims that he is neither left nor right, but he'll have to divulge more of his diplomatic agenda to win the voters he needs. 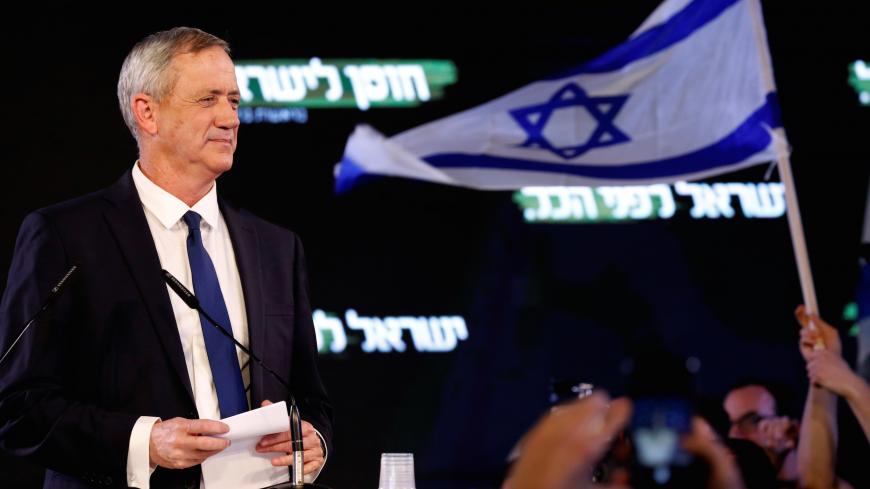 Only once in all of Israel’s history has a new centrist party managed to win an election and form a government. It happened in 2006, when Kadima under Ehud Olmert won 29 seats. But Olmert waged his campaign from the position of prime minister after replacing Ariel Sharon, who fell into a coma in the heat of the election campaign.

Kadima’s big advantage was that it rose from within the government as a result of the crisis in the Likud caused by Sharon’s plan to disengage from Gaza. Furthermore, it already had infrastructure based on mayors and local authorities who had defected from the Likud. At its peak, polls gave Kadima as many as 40 seats. The leadership it presented to the public consisted of the most senior figures from the right and the left, with sweeping experience in government. They included peace icon late President Shimon Peres, architect of the Oslo Accords, and many ministers from the Likud and Labor parties.

Kadima rose with the clear diplomatic vision of advancing the peace process on the basis of the permanent borders laid out in the 2003 “Road Map for Peace.” On the other hand, when it came to results, the party failed. It went through a series of three leaders (Olmert, Tzipi Livni and Shaul Mofaz) and slowly evaporated.

As such, the challenge facing former Chief of Staff Benny Gantz, head of the newly established Israel Resilience Party, is nothing less than enormous. He wants to win the elections with a centrist party that didn’t even exist two months ago and is built around newcomers from the left and the right. He's trying to dance between the raindrops without getting wet.

Like Kadima, Gantz claims that he is neither left nor right. He is considered the leading figure of the center and left, yet his top leadership includes former Likud Defense Minister Moshe Ya’alon, who is clearly aligned with the right; former Cabinet Secretary Zvi Hauser, who worked alongside Prime Minister Benjamin Netanyahu and is considered a fervent supporter of the nationality law and of strengthening the settlements; and Netanyahu’s former spokesman, right-wing publicist Yoaz Hendel.

Kadima had a very clear diplomatic agenda, which involved withdrawing to large settlement blocs in the West Bank while evacuating the more isolated outposts. In contrast, it became quite clear this week that the diplomatic policies presented by Gantz and his party are purposefully vague.

First, there was the very comprehensive and much talked about interview with Gantz, published in full by Yedioth Aharonot Feb. 8. He faced off against two carefully chosen columnist interviewers. The first was singer Shlomo Artzi, who is identified with the center-left. The second was right-wing publicist Hanoch Daum, who is identified with the New Right party. The combination was appropriate to Gantz’ campaign slogan, “There is neither left nor right.” While the approach was legitimate, even after a second reading of the interview, there is still no clear answer to critical questions: What are Gantz’ plans regarding the peace process? Does he support the evacuation of settlements? Will he support construction in the settlements? Or does he believe that this is not the time and plan to focus on security matters and healing the rifts in the nation in the post-Netanyahu era?

Daum insisted on challenging Gantz by stating that Ya'alon, Gantz’ partner, thinks the Oslo Accords were a disaster. He opposed the Gaza disengagement and he thinks there is no Palestinian partner to talk to. Daum asked Gantz about his stance on these issues. Gantz said vaguely, “The main question is that of security. It needs to ensure the State of Israel's security. Now, there's a question of interest here. We — and Netanyahu said this in his Bar Ilan speech — are not looking to control anyone else. We need to find a way in which we're not controlling other people.”

Daum also asked Gantz whether he supported the 2005 disengagement from Gaza. Gantz answered that the decision to implement the disengagement was based on diplomatic ideas and made legally. “So you're not sorry for the fact we uprooted communities from there?” Daum wondered. Gantz responded that the disengagement “was a legal move, a decision made by the Israeli government and carried out by the IDF and the settlers in a painful but good manner. We need to take the lessons learned and implement them elsewhere.”

When selections from the interview were first released Feb. 6, Netanyahu jumped at the opportunity to accuse Gantz of being a leftist, with plans to act unilaterally on the Palestinian issue, though Gantz never explicitly said so. Could it be implied from what he said? It depends on who you ask.

At the Israel Resilience headquarters, the staff went into battle mode. Concern that Netanyahu’s manipulative remarks would be etched irrevocably into the public consciousness, they responded accordingly: “The disengagement was carried out by a legitimate government led by the Likud. Netanyahu and other leaders of the Likud voted for it, and the spokesperson for it was [current Culture Minister] Miri Regev [who was IDF spokesperson at the time]. The Gantz government will do nothing unilaterally involving the evacuation of settlements.” Attached to another defiant text was a photo of Netanyahu shaking hands with former PLO leader Yasser Arafat.

Haim Ramon, an architect of Kadima and later a minister on its behalf, tweeted, “The disengagement was carried out by Ariel Sharon. Most of the Likud opposed the disengagement. That was why Sharon left the Likud and founded Kadima. Netanyahu, the Likud, Ya’alon, Hendel and Hauser all think that the disengagement was a disaster. I’d love to hear what Benny Gantz thinks about it, with a clear answer, if possible.”

Hauser then jumped into the fray. He was quoted as saying Friday, “He’ll build in the [West Bank] territories no less than Netanyahu.” If that’s the case, then what’s the difference between the Likud and Israel Resilience?

The most recent polls continue to put Gantz in the spotlight, establishing him as the main challenger to Netanyahu. On the other hand, the history of center parties does not favor him. As the election approaches, he will need to sharpen his positions, while Netanyahu and the New Right will try to manipulate any remarks that he, Ya’alon, or Hauser make. The left will certainly challenge him, too, and even attack him.

If he manages to form a government, Gantz will make history. Right now, however, the balance between the two blocs is not in his favor. Despite all his signals to the right, most of his voters come from the center-left. So far, his Israel Resilience isn’t creating the political big bang that he needs to win.