Why is two-state solution absent from Blue and White party charter?

The charter of the new Blue and White party veers to the right, thus offering Zionist left-wing Labor and Meretz parties an opportunity to reattract voters who support the two-state solution. 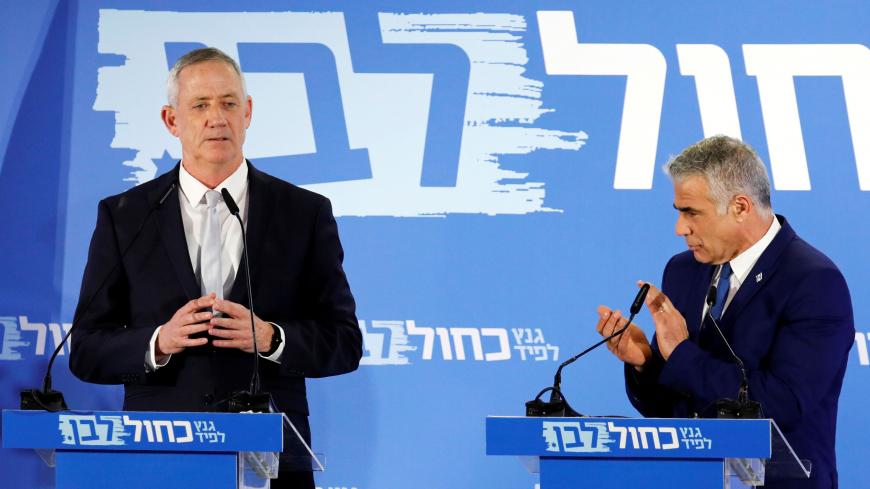 The new Blue and White party published March 6 for the first time its platform, omitting the two-state solution. Paradoxically, this vague and general diplomatic-security platform is the life preserver of the only Zionist left parties, Labor and Meretz.

The recent union between Yair Lapid’s Yesh Atid and Benny Gantz’ Israel Resilience party created Blue and White — a powerful new party, according to the polls. Subsequently, the Labor and Meretz parties lost more of their already weak power, threatening their existence. The Labor Party has recognized the potential of the vague Blue and White platform and released a sharp response that said, among other things, “Whoever runs away from the two-state solution will get a single state with an Arab majority and the end of the Zionist vision. The Labor Party is the only party committed to the vision of two states for two peoples and to maintaining the Jewish majority.”

Thus, the new Blue and White party became the biggest party in Israel overnight, at least according to the polls, at the expense of the left-wing parties, among other things. Blue and White defines itself as a centrist party with a big wink to the right, and from the start it wasn’t clear how former Minister of Defense Moshe Ya’alon, a clear right-winger from the Likud, and Knesset member Ofer Shelah (Yesh Atid), would sit together. The solution for Gantz-Lapid is a total blurring of positions in order not to chase away potential right-wing voters. Thus, for instance, the two-state solution or a Palestinian state weren’t mentioned in the platform.

So what is actually Blue and White’s diplomatic plan? “We will initiate a regional summit with Arab nations that seek stability and deepen the process of separation from the Palestinians, while uncompromisingly safeguarding the security interests of the State of Israel and the freedom of action of the IDF [Israel Defense Forces] everywhere. We will strengthen the settlement blocs. United Jerusalem is the eternal capital of Israel,” the party's platform states.

These general statements were meant for the ears of Likud supporters, whom Gantz and Lapid hope to catch in their net. They further promise in the platform, “There will not be another disengagement [such as the 2005 Gaza disengagement]. Any historic diplomatic decision will be brought to the people in a referendum or would be authorized in the Knesset with a super majority.” Likud voters would also live in peace with such a commitment.

What more does Blue and White promise? “Three chiefs of staff and a senior minister in the diplomatic-security Cabinet have 117 years of security experience among them and will lead the security outlook. We will stop protection money to Hamas, distance Iran and bring back the policy of strategic ambiguity that is an important security foundation,” it says. Again, these are declarations that have little to do with policy. It is not clear what the connection is between 117 years of security experience and a world view and alternative to the current regime.

“The Gantz-Lapid party is against Bibi [Prime Minister Benjamin Netanyahu] but for Bibi’s policy,” said former Minister Haim Ramon in an interview to Army Radio on the day Blue and White’s security-diplomatic platform was revealed. Ramon, a leftist who was one of the founders of the Kadima Party — the centrist party that tried to move toward separation from the Palestinians through unilateral disengagement — argues that the center-left is afraid of confronting the most critical question. As he sees it, “According to the Blue and White platform, disengagement from the hell in the Gaza Strip was a mistake. They think we should have left 8,000 settlers to live among 1.5 million Palestinians. For the information of Ya’alon and Gantz, between 2001 and 2005, 115 Israeli soldiers and civilians were killed in Gaza and 6,000 mortars and Qassam rockets were fired on the area surrounding Gaza.”

Blue and White’s platform was written in haste in merely a few days by three people: Shelah on behalf of Lapid, Hili Tropper on behalf of Gantz and Yoaz Hendel, Ya’alon’s representative. While large parts of the Yesh Atid platform on religion and state were adopted, the part that dealt with the State of Israel’s security principles, which Shelah wrote, were left out. This no coincidence. The topics of security and policy are the most explosive, especially as Netanyahu attempts to etch in public consciousness that Blue and White is a left-wing party. Those who had to compromise in Blue and White on these questions were those on the left, like Shelah, who declared in 2013 that the occupation corrupts. Gantz had also spoken of two states in closed conversations before the alliance of his Israel Resilience with Ya’alon’s Telem Party, and even of letting go of some neighborhoods in East Jerusalem.

Blue and White is a party that presents a center-right diplomatic agenda, but the critical mass of its voters hails from the center-left bloc. Most of them believe in the two-state solution. According to the polls, the party would win more than 30 mandates, which drifted over from parties such as Labor, Tzipi Livni’s Hatnua and even from Meretz — and also of course from Yesh Atid.

Thus, its distancing from the two-states-for-two-people banner, or refraining from presenting a detailed diplomatic plan for separation from the Palestinians, could chase voters away back to the Labor and Meretz parties. Still, Blue and White is not worried, since after the election these two parties would recommend Gantz to form the next government in any case. (Obviously, these parties would not recommend Netanyahu.) The strategy of Blue and White is that even if they lose voters, it would bring over new voters from the soft right, from the Likud, and thus create a change in the political map. Of course, this carries a significant risk.

The Blue and White party enjoys the support of a huge public of voters that is interested in advancing separation from the Palestinians as a world view. Thus Gantz’s evasion from a clear leadership statement on the core issue that is perhaps the most significant for the future of the State of Israel is grating. The grave danger in this situation is that the public, which so longs to replace Netanyahu, would completely abandon Labor and Meretz and come over to Blue and White. This would fatally crush the Israeli left and would create an imbalanced political map.

Thus, it’s the opportunity and the responsibility of Labor and Meretz to fly the diplomatic flag of negotiations with the Palestinians. Paradoxically, the release of Blue and White’s platform made them relevant again.