Paradoxically, the threat of the new Blue and White party in Israel has pushed the Labor Party into featuring sharper messages on diplomatic affairs and a clearer agenda. 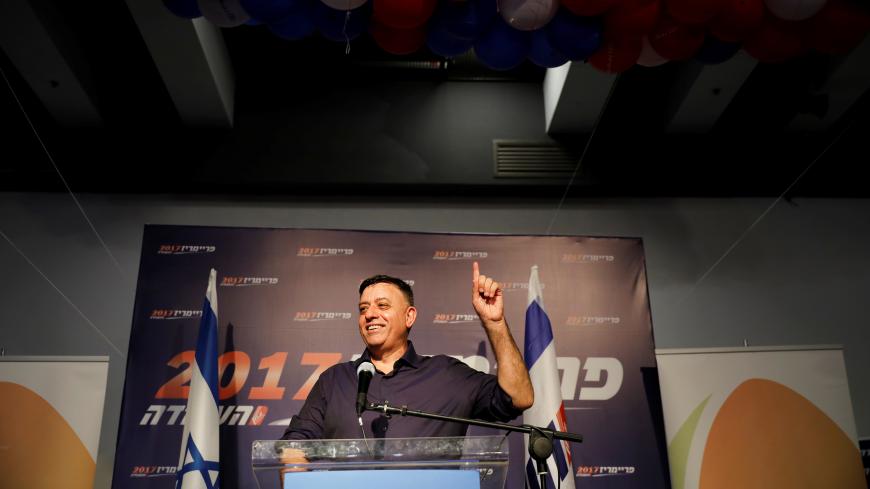 Labor Party leader Avi Gabbay is reformulating his party's message in reaction to polls that show it in single digits for Israel's Knesset elections in April. Here, Gabbay delivers his victory speech in Tel Aviv after winning a runoff election for the Labor Party leadership, July 10, 2017. - REUTERS/Amir Cohen

Paradoxically, it was the new Blue and White party of Benny Gantz and Yair Lapid that pushed the Labor Party back to its traditional positions on diplomatic affairs.

It happened almost immediately after the big political explosion caused by the founding of the new party Feb. 21. This merger of center-left parties was the worst possible news that Labor Party Chairman Avi Gabbay could have asked for. And it happened just one day after the announcement that Maj. Gen. Tal Russo had joined Gabbay's party and taken the No. 2 slot on its list.

Even before the creation of the rival Blue and White party, the Labor Party’s campaign was foundering. It had single digits in the polls when Gabbay launched his campaign for prime minister. Then Gantz entered the fray with a successful launch that drove voters to him. For Gabbay, the future was already bleak. Then the merger of Gantz’ Israel Resilience party and Lapid’s Yesh Atid was nothing less than a death stroke for Labor. With voters seeing a real opportunity to take down Netanyahu, they rallied around the platform headed by Gantz and Lapid. As the two remaining parties on the left, Labor and Meretz would end up paying the price.

In 2009, Meretz came very close to being kept out of the Knesset by the vote threshold. Its supporters switched allegiance to Tzipi Livni, who was then head of Kadima, believing that this would help her get elected prime minister. This is the exact same situation that the Labor Party is facing today. So, having no choice, Labor switched campaigns yet again. Now Gabbay as party chairman will have to navigate his party through stormy waters in an effort to bring back voters who fled Labor for the Blue and White party, while preventing even more voters from abandoning ship. At the same time, he cannot attack Gantz to his face, since that will make it seem like he is trying to sabotage a potential attempt to bring down Netanyahu, the one thing Labor Party supporters want most of all.

Anyone who has kept track of Gabbay’s interviews and activity on social networks over the last weekend, done in coordination with opposition Chair Shelly Yachimovich (also of Labor), will see that Labor has returned to its natural element in just about everything it says, and in a big way. Its messages have been sharpened and honed in this new, ad hoc campaign. On the one hand, Labor puts its support behind Gantz, whom it regards as a natural ally and will support to form the next government. On the other hand, senior Labor Party members argue that voting for Labor is the only way to prevent Gantz from joining forces with the Likud. Campaigners call it strategic voting: A vote for Gantz is a vote for a government headed by Netanyahu, while a vote for Labor is a vote for a government headed by Gantz.

In a Feb. 23 interview with Channel 12, Gabbay called a vote for the Labor Party “an insurance policy for a government turnover. … The greatest trauma faced by our camp is that the new parties that were created transferred their allegiance to Netanyahu.”

Haim Jelin was, until recently, a member of the Knesset for Yesh Atid, but he switched allegiances when he did not receive a realistic place on the party’s new list and was assured a safe spot with the Labor Party. He also attacked the Blue and White party in a tweet: “From the very beginning, what I liked about Yesh Atid was its call for a national unity government. Today I heard Lapid saying that Blue and White is the new Likud. That’s not a problem per se. Just speak clearly and say that we are on the right and not in the center.”

Then, on Feb. 25, President Donald Trump’s son-in-law Jared Kushner began to reveal the outline of the president’s new diplomatic policy for the Middle East. Gabbay was quick to praise the new policy, tweeting, “Separation from the Palestinians on the basis of a two-state solution is our way as the Labor Party.” Similarly, Yachimovich tweeted that the US plan aligns with Labor Party values.

In contrast, the Blue and White party forbade its candidates from commenting on this or any other issue, so as not to scare away potential voters from the right. It has yet to determine what its messages will be, and even Gantz, as party chair, has yet to respond to this important initiative.

Anyone following Gabbay’s Twitter account will see that he has honed his positions on almost every issue traditionally identified with the Labor Party. This includes support for the LGBTQ community, public transportation on the Sabbath and persistent support for Israel’s Arab population. In contrast, the new party formed by Gantz and Lapid has rejected the idea of joining forces with Arab parties to block a right-wing coalition.

On Feb. 25, Gabbay participated in a joint Jewish-Arab conference organized by the Labor Party in Ein Harod. He summed up the event by saying, “I am proud of the path taken by the Labor Party, which leads the way in advocating for coexistence between Jews and Arabs. Equality is a supreme value, and we are committed to it.”

As far as the Labor Party is concerned, it had no choice but to adopt this campaign. It is intended to rescue the party from being overwhelmed by a flood of votes for Gantz and Lapid. At the same time, however, this has also forced the Labor Party to sharpen and hone its messages. Over the last few years, its leaders, Yachimovich and then Gabbay, have attempted to appeal to the right and even sent signals to the settlers. Upon being elected chairman of the Labor Party, Gabbay announced that he knows how to draw Likud supporters. He even tried to ingratiate himself with this voter base with the controversial statement “The left forgot what it means to be Jewish.’’ Now the Labor party is returning to the left.

Has the Labor found the formula it needs to keep its voter base and also embrace Gantz as its candidate for prime minister? The next round of polls will show how effective the current campaign is.