Blue and White ignored Israeli Arab vote at own peril

The Blue and White list shunned the Arab electorate, lost their vote and as a result will now have to sit in the opposition. 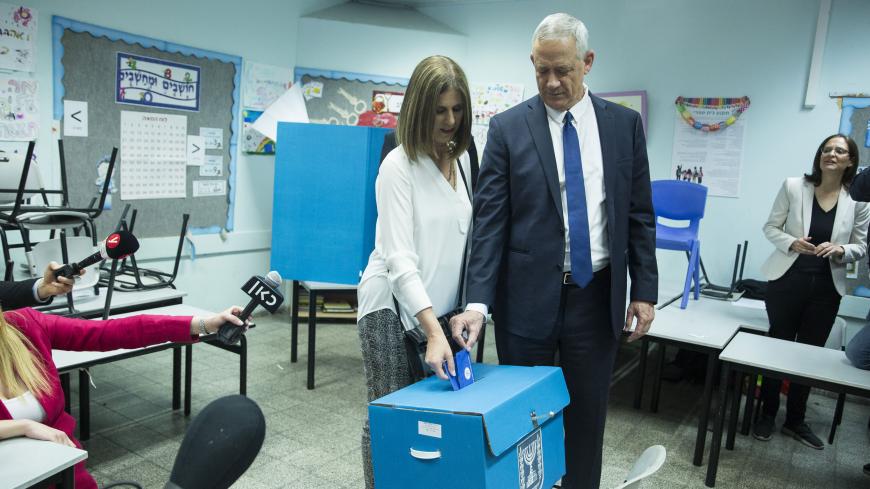 Soon after news stations released their exit polls and the actual results began trickling in on April 9 indicating that the right-wing bloc had won Israel's legislative elections, Labor Knesset member Shelly Yachimovich offered some impractical advice to Benny Gantz, chairman of the Blue and White party. With the sadness from Labor's stunning defeat visible on her face during an interview with Channel 12, Yachimovich said that if she were in Gantz’s position, she would go knocking on the Arabs’ doors to apologize and ask for their support.

The idea that Arab voters have no firm ideological position and that they could be easily moved by a simple apology testifies more than anything else to the fact that even the left-wing parties have a condescending attitude toward Israeli Arabs, yet still expect their parties to bail them out when they are in trouble.

In line with the famous adage that “the camel can’t see the hump on its back,” both Yachimovich and the Blue and White were busy scavenging for votes almost everywhere, except among the Arabs. Gantz and the members of his list treated the Arab vote as if they had it in their pocket, though only in the sense that the Arabs help them block Benjamin Netanyahu's path to a coalition and then stay out of the government while thanking the left.

The Blue and White's leaders fell into a trap Netanyahu set for them and paid for it with failure at the polls. The party was formed through a series of mergers intended to create an alliance strong enough to seriously challenge the Likud. Netanyahu countered with one of his old, familiar tricks: fear mongering targeting the Israel Arab population. In a speech delivered Feb. 21 right after Yair Lapid, from Yesh Atid, and Gantz, from Israel Resilience, consolidated their parties, Netanyahu accused Blue and White leaders of “relying on Arab parties who not only don't recognize the State of Israel, but want to destroy it.” His ploy worked.

Four days later, a recording surfaced of Lapid, who during the 2013 elections had disparagingly referred to some Arab Israelis as “Zoabis,” a reference to controversial former Knesset member Haneen Zoabi. In the recording, Lapid insisted, “We will not create a bloc [to prevent the right from forming a coalition] with the Arab parties. Period. Netanyahu just made that up, so that he could say that ‘They would work together with the Arab parties to block us.’”

On April 3, six days before the election, a young Arab woman burst into tears at an election rally in Tel Aviv as she asked Gantz why he was refusing to sit with the Arab parties. Gantz responded generically, as Netanyahu would, “Tell your leaders not to speak out against Israel.” “Your leaders,” he said. He made no mention of partnership.

With only one more seat, Blue and White could have been the biggest party in the Knesset, surpassing Netanyahu and the Likud. They are tied at 35 seats. The Gantz-Lapid list, however, preferred to treat the Arabs like fire. They kept their distance, lost the Arab vote and will now have to sit in opposition. The same is true of the Labor Party, which was less worried about being branded leftist because it did not harbor the illusion that Likud voters would suddenly switch and vote for its team. Nevertheless, the party acted the same as Blue and White.

Even when it became clear from the polls that many Arab Israeli voters were disappointed that the Arab Joint List had disintegrated and were looking for an alternative, Labor still believed it could be a left-wing party without the Arabs. Labor was crashed, winning only six seats. The party's chair, Avi Gabbay, had opposed legislation proposed by Meretz to repeal the Nationality Law, which codified the Jewish identity of the State of Israel. Throughout the campaign, Labor had asserted that the Nationality Law should be fixed, not repealed.

A few figures from the election results underscore how effective field work can be. In Kafr Kassem, home to Knesset member Issawi Frej, his party, Meretz, won 39% of the vote, more than any other party. The Arab Ra’am-Balad party followed, with 32%, and then Hadash-Ta’al, with 23%. While the voting rate in Kafr Kassem was 62%, in other Arab towns voter turnout was significantly lower, such as in Nazareth and Shfaram, at 39% and 47%, respectively.

At the time of writing, there is still no accurate figure for the overall percentage of Arabs who voted. It is estimated to be 55%, which is considerably less than in the 2015 election, in which 64% voted. Reports in the afternoon of April 9 claimed that the Arab voting rate stood at just 20%, which may have been in part the result of reports of hidden cameras installed by the Likud in polling stations in Arab areas. After representatives of the Arab parties launched an emergency campaign to get voters to the polls, there was a slight uptick in the number of voters, which affected the results, such that Ra’am-Balad apparently passed the vote threshold.

In Umm al-Fahm, for instance, party activists only managed to get voters to the polls about an hour before the polling stations closed. By the end of the day, turnout stood at just 45%, with Hadash-Ta’al winning most of the votes, 79%. In contrast, Blue and White received just 0.7% of the vote.

Meretz — which put Frej, a Muslim Arab, fourth on its list, and Ali Salalha, a Druze from Beit Jann, fifth — won five seats in the election. N., a Bedouin who lives in Tel Sheva and spoke to Al-Monitor on the condition of anonymity, said, “We didn’t feel like they [Meretz] represent us or that they are doing anything for us, given the wave of hatred we experience here."

I’ve known N. for many years. He is an Israeli in every sense of the word. According to him, when the Nationality Law passed, not a single Jewish party stopped it, while the Arab Knesset members continued to squabble over seats and honor. “We have no interest in the [Zionist] parties that pushed us out or in the Arab parties that act as if they are doing us a favor by representing us,” he said.

N. waited until the polling stations were about to close before deciding to cast a vote. He ultimately did so in response to reports that turnout was really low in the Arab sector, which made him concerned that none of the Arab parties would manage to pass the vote threshold. He said that he voted not as an act of support, but in the hope that maybe he could “punish” the people inciting against the Arabs of Israel. “It didn’t work,” he said with a pained expression.

Participation rates and results indicate that at least half of Israel’s Arab population felt as if this year's election was not their election, that it would not change their lives, that what was will be, and that there was no one they could trust. The conclusion is that if the center-left parties fail to hold themselves to account and don’t stop shunning Arab voters, they will never return to power. Labor's Yitzhak Rabin won Arab votes in 1992, and in 1999 the party's Ehud Barak won 70% of the Arab vote, enabling him to defeat Netanyahu.

Gantz began his election campaign with a video citing the number of Palestinians killed in Gaza during Operation Protective Edge in 2014, when he served as military chief of staff. He was hoping that it would encourage Israelis on the right to vote for him. In the end, he lost. Neither Arabs nor voters on the right were willing to put their trust in him.