Will Israeli Arabs come out to vote in September?

The numbers make clear that a change of regime and victory for the Blue and White in September elections can only be achieved by boosting voter turnout among Arabs, who represent double the vote potential than the ultra-Orthodox parties, which garnered 16 Knesset seats in the April vote. 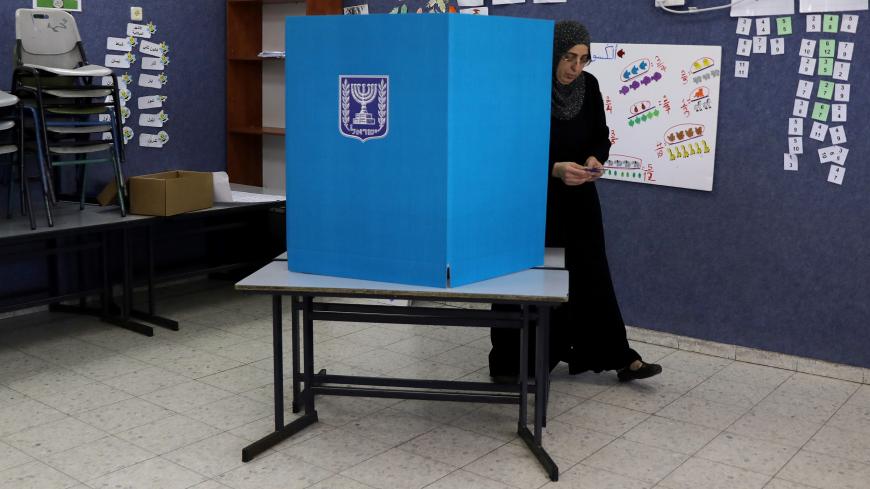 An Israeli-Arab woman walks out from behind a voting booth as Israelis vote in a parliamentary election, at a polling station in Umm al-Fahm, Israel, April 9, 2019. - Reuters/Ammar Awad

When the polls closed on April 9 in Israel, Blue and White leader Benny Gantz was quick to proclaim victory. Not so fast, however. When the pollster Camil Fuchs announced the results of his exit poll on Channel 13 News, Israelis grasped the true reality. Prime Minister Benjamin Netanyahu had won again. Fuchs turned Gantz's “victory speech” into the joke of the elections. Similarly, a poll Fuchs conducted for Channel 13 on May 30, the day after Israel’s shortest-ever Knesset voted to dissolve itself, does not signal a clear victory for Gantz and the center-left bloc in September elections for the 22nd Knesset.

Speaking with Al-Monitor, the veteran statistician said an analysis of all eligible votes in the April elections, including those cast for the New Right and Zehut, both of which failed to cross the electoral threshold, points to a significant advantage for the right-wing and ultra-Orthodox bloc. If the New Right and Zehut had received enough votes to get their candidates into the Knesset, the bloc would have held 68.5 of the 120 Knesset seats (instead of the 65 seats it received).

The New Right and Zehut, along with the center-right Gesher, are likely to ally with larger parties for the Sept. 17 elections instead of running independently. Given this, Prime Minister Benjamin Netanyahu is expected to receive his sixth mandate to form a government. To deprive Netanyahu of such a victory, Avigdor Liberman, his nemesis and chair of Yisrael Beitenu, which garnered five Knesset seats in April, will need at least two or three additional seats and with them join Netanyahu’s rivals to tilt the balance against the right and ultra-Orthodox.

The center-left bloc also failed to fulfill its electoral potential on April 9. The two Arab factions together received three seats less (10 in all) than the alliance of four Arab parties, the Joint List, received in the 2015 elections for the 20th Knesset. According to Fuchs, his studies confirm assessments that the breakup of the Joint List earlier this year resulted in significantly lower voter turnout in Arab areas.

Whereas turnout in Jewish and mixed Jewish-Arab voting areas stood at 67%, in exclusively Arab areas it only amounted to 49.2%. Among the 60 towns and villages with turnout lower than 40%, 57 were Arab communities. Fuchs says that had it not been for a push by the Arab leadership to get out the vote in the final hours before the polls closed, turnout would have been far lower, and the number of Arab lawmakers would have dropped below 10.

It should be noted that the number of eligible voters in Arab communities is double the number in the Jewish ultra-Orthodox sector, but the two ultra-Orthodox parties, Shas and Yahadut HaTorah, nonetheless won 16 Knesset seats, six more than the Arab Hadash-Ta’al (six) and Ra’am-Balad factions (four). The showing by the ultra-Orthodox reflected voter turnout of more than 80% in the exclusively ultra-Orthodox towns of Elad, Beitar Illit and Modi’in Illit.

Fuchs’ analysis indicates that low Arab turnout stemmed largely from having no hope for change and disappointment at the Joint List disbanding. Former Knesset member Dov Khenin, the only Jewish lawmaker for the communist Hadash in the 17th to 20th Knessets, agreed that internal Arab political divisions kept tens of thousands of Arab citizens from the ballot box. In an interview with Al-Monitor, Khenin said that he expects the rift to be mended ahead of the September elections and for a united Arab party to be formed.

“The main reason for avoiding the vote was not ideological, it was despair,” Khenin said. “They [Arab citizens] are telling themselves, ‘The Jewish Knesset members ignore us in any case, so why trouble ourselves to stand in line at the ballot box? After all, our own Knesset members will not succeed in doing anything for us [on their own].”

Khenin believes two conditions are key for a center-left victory: increased motivation among Arab voters to participate in the democratic process and preventing a further decline in the performance of the Labor Party and left-wing Meretz that could keep them out of the Knesset next time altogether.

The Blue and White's leadership, Khenin thinks, can play a vital role in boosting Arab voter motivation. “They [Blue and White] don’t have to become left wing and promise an Israeli-Palestinian peace,” said the much-admired former parliamentarian, one of the most enthusiastic proponents of a two-state solution. “I believe that if Blue and White displays a willingness to confront the crucial national issues of the Arab public, voter turnout in Arab communities could be raised to 65% in order to defeat the right.”

Khenin says Gantz and his fellow party leaders must go into the Arab street and meet with respected local leaders and elected officials. “They must tell them that they are citizens with equal rights and that this is their state as much as it is the state of its Jewish citizens,” he asserted. “They must also present them with credible plans to address such [highly painful] issues as high crime rates and housing shortages.”

Khenin bases his formula for achieving regime change on the major achievements scored by Labor Party leader Jeremy Corbin in the United Kingdom and the popularity of the liberal US Democrat Bernie Sanders.

“When honest people go into a political system that looks like one giant fraud and lay out their truth to the public, people are willing to give it a chance,” Khenin said in a January 2019 speech to the joint Jewish-Arab organization Standing Together. “On the other hand, when [Blue and White co-chair Yair] Lapid joins Netanyahu in inciting against the Arabs, and [Labor leader Avi] Gabbay joins Netanyahu’s attack on the left, their voters don’t understand what they want and prefer to go for the original [i.e. the right wing].”

Khenin was referring to Lapid’s lashing out at Arab lawmakers, whom he called “Zoabis,” after the outspoken former lawmaker Hanin Zoabi, and to Gabbay parroting after Netanyahu that the left “has forgotten what it means to be Jewish.” Rather than leaning right in a vain bid to placate voters, the left must challenge the political system with its convictions, Khenin said.

Zehava Gal-On, former leader of Meretz, agrees with Khenin's assertion that Arab voter turnout can be increased. “I know there is mass investment in a campaign to encourage the Arabs to go to the ballot box on Sept. 17,” Gal-On told Al-Monitor. “Many good Jews from the US are investing in this.”

Gal-On also welcomes the prospect of a renewed union of Arab parties, stating, “Everyone loves it when leaders are willing to admit their mistakes and tell voters, ‘We listened to your criticism. We have joined together, and now you have to vote for us.’” Nonetheless, she also insists that many Israeli Arabs do not necessarily vote for sectoral parties and urges the formation of a new Israeli left based on a Jewish-Arab partnership. Gal-On believes that this is the way to prevent Meretz from sliding below the electoral threshold and to bring Israel’s right-wing regime nearer to its end.

Blessed are the believers. As Gantz learned the hard way in the hours after the April 9 elections, when he wrongly thought he had won, and as shown by Netanyahu’s failure to form a government before the deadline expired on May 29, Israeli political surprises are no longer what they used to be.