Israel's four Arab parties, which split into two Knesset lists before the April elections, are now discussing reunifying to contest September elections with the goal of generating more Arab votes. 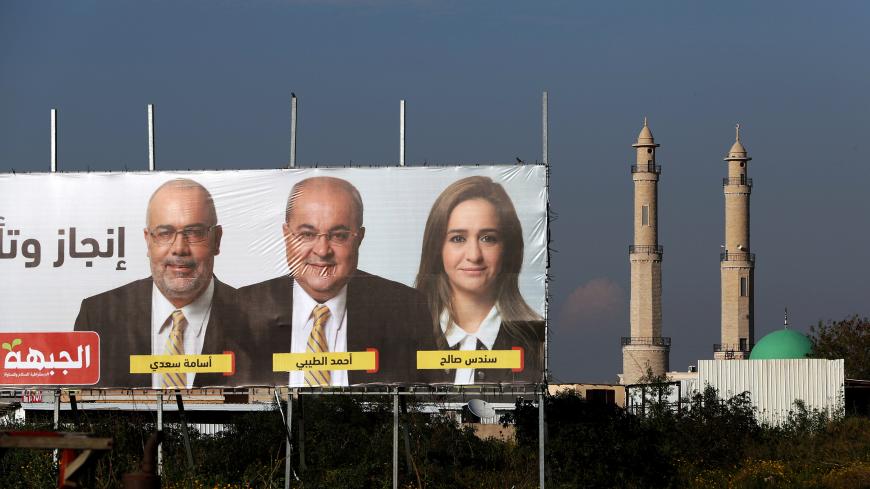 Senior officials of Arab parties in Israel have told Al-Monitor that the Joint List will be revived to run a single Arab list in the Sept. 17 elections for the 22nd Knesset. According to various assessments, the parties will within two weeks resolve the disputes that had led to the party disbanding in January. The effort to reunify was expected, which was why lawmakers from Hadash, Ta’al, Balad and Ra’am voted last month in favor of dissolving the 21st Knesset after Prime Minister Benjamin Netanyahu failed to form a new government.

The political center-left, mainly the Blue and White, had hoped that at the least Hadash and Ta’al, which aspire to Jewish-Arab political cooperation, would have voted against Netanyahu’s proposal to disband the Knesset. In that case, Netanyahu would have had to return the mandate for forming a government to President Reuven Rivlin, who might have then asked Netanyahu's rival and Blue and White Chair Benny Gantz to try his hand at it. True, the four Arab parties would probably not have provided the majority needed to prevent the Knesset from dissolving even if they had voted against it, but they could have created a semblance of commitment to Jewish-Arab political unity against the political right. The latter, obviously, did not happen.

The results of the April 9 Knesset elections demonstrated to the Arab parties that running separately, in two blocs — Ta’al and Hadash on one ticket, Balad and Ra’am on the other — had weakened them. The Knesset dissolving and scheduling new elections has provided them a golden opportunity to rectify their mistake. There is, however, a catch: The four Arab parties reunifying will come at the expense of a joint Arab-Jewish run for the Knesset. Although Ayman Odeh and Ahmad Tibi, the leaders of Hadash and Ta’al, respectively, have spoken eloquently of political cooperation with the Jewish “liberal camp,” at the decisive moment, they opted to reunite with Balad.

At the end of May at Gantz’s invitation, Odeh had addressed an anti-government rally in Tel Aviv. Ahead of the event, he tweeted, in Hebrew, “The struggle against Netanyahu’s attempts to destroy the democratic public space is a joint struggle by all democratic forces. An alternative to a corrupt and destructive regime will not be possible without broad cooperation among all citizens, Jews and Arabs.” In an interview with Al-Monitor after the rally, Odeh said that the die had been cast and asserted, “From now on, what is needed is a courageous partnership between true leaders.” His meaning was clear. Odeh believed that his days of being ostracized were over after being invited to speak as an equal at an opposition protest, so the path was now clear for Jewish-Arab cooperation, to strengthen the left-wing bloc and benefit the country’s 21% Arab minority. Actions, however, speak louder than words.

Issawi Frej, the only Arab Knesset member from a Zionist Israeli party, the left-wing Meretz, told Al-Monitor that the Hadash and Ta’al leaders understand the importance of Jewish-Arab cooperation but are scared. Odeh and Tibi's views are closer to those of the Jewish party than those of Balad, but Frej said, they would rather run with the nationalist Arab organization than hook up with Meretz.

Running with Balad will distance Hadash and Ta’al from cooperation with centrist and left-wing Jewish forces because of its extremist views. Its members have generated highly publicized provocations, in the process tarring all Arab Knesset members as radical troublemakers and providing Netanyahu and his allies with ammunition against them. Following Odeh’s speech at the opposition rally, Netanyahu accused his rivals of giving a platform to “terrorism supporter Ayman Odeh.” Of all people, Moshe Ya’alon, the hard-line standard-bearer of Blue and White, was the one who came to Odeh’s defense, explaining the difference between Hadash and Balad as he sees it. Balad founder Azmi Bishara and the party's former Knesset members Basel Ghattas and Haneen Zoabi are the ones who should be described as “terrorists,” Ya’alon said, adding, “Balad should have been outlawed as far as I’m concerned.”

Frej told Al-Monitor that he had discussed a joint Jewish-Arab ticket with Odeh. “He told me, ‘Sure, of course we should go together; that is how it should be,’ but he also had a precondition — that other parties join such a list.” Frej believes Odeh was referring to Balad. After speaking with Odeh, Frej approached Tibi, who, he said, gave him the same answer.

“They are afraid, but leaders should not be afraid,” Frej said. “They should chart a course and follow it as their heart tells them. Balad is not close to them. They disagree on almost everything, but they are sticking together, and that is too bad. They will discover that their voters do not want fake unity.”

Frej is proud of having mobilized more than 40,000 Arab voters for the April elections, enabling his small party to garner sufficient votes to enter the Knesset and to prove that Jewish-Arab cooperation is possible. Two months after the vote and three months ahead of the next one, Meretz would like such cooperation to continue. On June 12, Frej and former Knesset member Mossi Raz announced that they would run together for joint party leadership. The goal of their joint run is to build a strong and influential Arab-Jewish left. According to Frej, he suggested the move after he and Meretz Chair Tamar Zandberg despaired of a union with Hadash and Ta’al.

Contacts about reunifying the Arab parties are at an advanced stage. The four party leaders will discuss their joint list of candidates for the next elections in the coming days. Disagreement over the candidate list, by the way, is what led to the division within the Joint List prior to the April elections, after Tibi argued that he enjoyed far greater popularity among Arab voters than the other parties thought he did.

The Arab parties now have an updated picture of the state of play. The Hadash-Ta’al faction won six Knesset seats in April, whereas Balad and Ra’am earned four. It is safe to assume that these results will allow the parties to now overcome their differences and put together a single candidate roster. Agreement over the list cannot, however, blur the main problems that plagued the Joint List. The substantive ideological gaps remain. Thus, the Arab parties will probably continue trying to differentiate themselves from one another, and their pledge to work for the integration of Arab citizens in Israeli society will amount to mere lip service.

Hadash and Ta’al were close to breaking the glass ceiling and bringing about Jewish-Arab political cooperation. They appear to have given up on that, however, preferring instead an illusory unity to real bridge building. Odeh, who claimed just weeks ago that the die had been cast and a new page had been turned, has chosen to remain in his comfort zone rather than make the courageous decision that he spoke about with such pathos.