Why does Israel's center-left stick to the same failed strategy?

The failed attempts by Israel's center-left to adopt the strategy of Kadima under Ehud Olmert to win election and form a government could be opening the door to the possible establishment of a Jewish-Arab party. 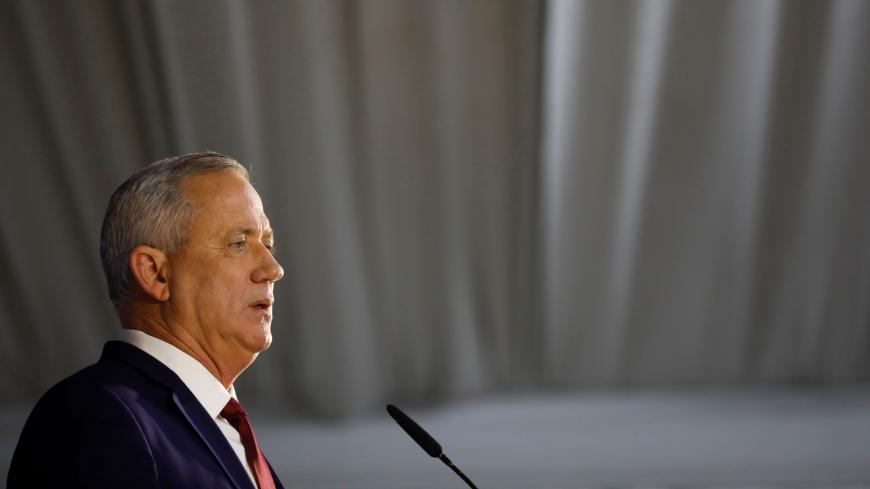 Benny Gantz, head of Blue and White, gives a statement to the media in Ramat Gan, Israel, March 1, 2020. - REUTERS/Nir Elias

“New situation, realistic conclusion.” This is how Knesset member Orly Levy-Abekasis on April 12 summed up her decision to jump ship from the political center-left to join the right-wing, ultra-Orthodox bloc led by Prime Minister Benjamin Netanyahu. Thus the woman whose tiny Gesher party had run on a joint ticket with Labor and Meretz in the March 2 elections, and who was elected to the Knesset by center-left voters after failing to cross the electoral threshold on her own in previous elections, crossed the political divide after the results came in.

According to Channel 12 News poll results released April 13, if elections were held today, Gesher and the Derech Eretz faction of Blue and White Knesset members Zvi Hauser and Yoaz Hendel would each garner some 1.4% of the vote, far below the 3.25% required for Knesset representation. In other words, the three lawmakers who deprived Blue and White Chair Benny Gantz of the Knesset majority he needed to form a government owe their seats to center-left parties and their center-left voters.

Gantz has now missed two opportunities — after the September 2019 and March 2020 elections — to become Israel’s next prime minister. Gantz himself put it succinctly when, according to a November report by Channel 12 News reporter Amit Segal, he said, “I am not prime minister because of Yoaz and Zvi.” Gantz and his associates have never denied the report. Clearly, however, the problem for the center-left is not limited to Levy-Abekasis, Hauser and Hendel, whose right-wing political views are well known. Their getting elected to the Knesset were impressive political feats. They could not have succeeded had the center-left political leadership not sought out right-wing candidates to bolster their camp's legitimacy, lending them power and influence they would not have accumulated by running alone.

Since Benjamin Netanyahu's election as prime minister in 2009, there has been a sense among the political center-left that only a party modeled along the lines of the centrist Kadima under former Prime Minister Ehud Olmert can attract enough votes for them to form a government, as happened in defeating the Likud in 2006. Since that victory, however, as Al-Monitor reported March 5, the centrist parties have more resembled the 2009 version of Kadima, under the leadership of Tzipi Livni, who failed to form a government despite winning one more seat than Netanyahu and Likud.

Shany Mor, a researcher at the Israel Democracy Institute told Al-Monitor, “The Kadima-style parties always adopt the same failed strategy. They set out with the presumption that victory can only be achieved from the center, by blending a bit of the right with a bit of the left. Then, two weeks prior to elections, panic sets in when they realize they are not attracting right-wing voters. They then power up their engines to try and draw voters from the left, thereby weakening the left-wing parties and placing additional right-wing lawmakers in the Knesset on the backs of left-wing voters.”

Perhaps, therein lies the root of the problem.

Kadima was formed in November 2005 with 14 Likud lawmakers as an alternative to the nationalist right. It therefore managed to attract moderate right-wing voters and form a government. That, however, has not been the model adopted by subsequent Kadima-style parties. These latter political platforms mistakenly thought that they could abandon their ideology, and then two or three months prior to elections, cast several “right-wing” figures of zero electoral consequence and win at the ballot box. This series of assumptions has proved to be fundamentally flawed.

“Prime Minister Ariel Sharon established Kadima not as an alternative to the Israeli left, but rather as a moderate expression of the national right,” Lior Chorev, a political strategist, explained to Al-Monitor. “It was not the Labor Party that was wiped out in the 2006 elections, it was the Likud. The idea that the right wing would do the job of the pragmatic Zionist left disappeared in 2009. There are no shortcuts. Political infrastructure is built for the medium and long term. Tribal voting cannot be shifted in the blink of an eye.”

The real question is whether adopting the slogan “Anyone but Netanyahu” but without providing real opposition critical of the government and offering a true alternative can win elections in Israel. People tend to forget, but Netanyahu first rose to power in 1996 after serving for several years as leader of the opposition and making life miserable for Prime Minister Yitzhak Rabin over the Oslo Accords with the Palestinians. He became prime minister again in 2009 after heading the opposition and making life difficult for Olmert over the Second Lebanon War in 2006.

“In the boxing arena, the winner is the leader identified with the values of his tribe and at the same time punches his rival in the underbelly of his voters’ values harder, faster and without blinking,” Moshe Gaon, political strategist and author of the book “Killer Instinct,” told Al-Monitor. Gantz, Gaon said, understood this when he founded Blue and White. “[Gantz] supplied the required dose of self-righteousness with the ‘Anyone but Netanyahu’ slogan. He attracted center-left voters, but failed to crack the code of the right-wing tribe’s loyalty.”

Netanyahu has served as premier since 2009. Isn’t there anyone in Israel who can beat him? Olmert was the last to do so.

In the 2006 elections, the Likud, led by Netanyahu, only won 12 seats. Olmert told Al-Monitor, “The culture of public debate has completely changed. [President Donald] Trump, [British Prime Minister Boris] Johnson and Netanyahu represent a new style, characterized by rudeness, devoid of the values once adhered to by the public. Many in Israel would have supported a Netanyahu rival, had he been more assertive, sharp, even somewhat macho, with a willingness to fight over the issues important to the public. In the landscape of those against Netanyahu there is no one like that. And this is why its relatively easy for him to survive.’’

Still, there is no doubt that strong Arab voter participation is one of the keys to altering Israel’s political map. Arab turnout in the March 2 elections, at 64.8%, broke a two-decade record, but this is apparently not enough. That said, there remains untapped potential for far higher turnout. In the 1999 elections, Arab turnout was 75%. Given the exclusion of Arab candidates from the center-left Zionist parties, one of the ideas to recently emerge is the establishment of an Arab-Jewish party to run in the next election, giving voice to the views of both groups. Is Israeli society ready for such a move?

“The politicians in Israel, Arabs and Jews, have not yet internalized the dramatic changes underway [in Arab society], especially among the younger generation, and therefore, Israeli society may not be ripe yet for an Arab-Jewish party,” Eran Singer, an Arab affairs analyst and expert for Kan, the public broadcaster, told Al-Monitor. “On the one hand, large swathes of Jewish society still do not believe Israeli Arab leaders. There is still fear that cannot easily be overcome, some stemming from incitement and some from historical reasons. On the other hand, within Arab society there is indeed greater support for such a move, but the old guard of Arab politics in Israel will not give up so easily.”

There is no doubt that the Joint List, a union of four Arab parties that won 15 Knesset seats and is now the third-largest faction in the legislature, would not welcome such competition, but the idea is gaining traction with each passing day.