The true power couple of the Israeli elections

Former Minister Moshe Kahlon’s quiet alliance with Foreign Minister Avigdor Liberman is part of a move that might crown them as kingmakers who will determine Prime Minister Benjamin Netanyahu’s fate. 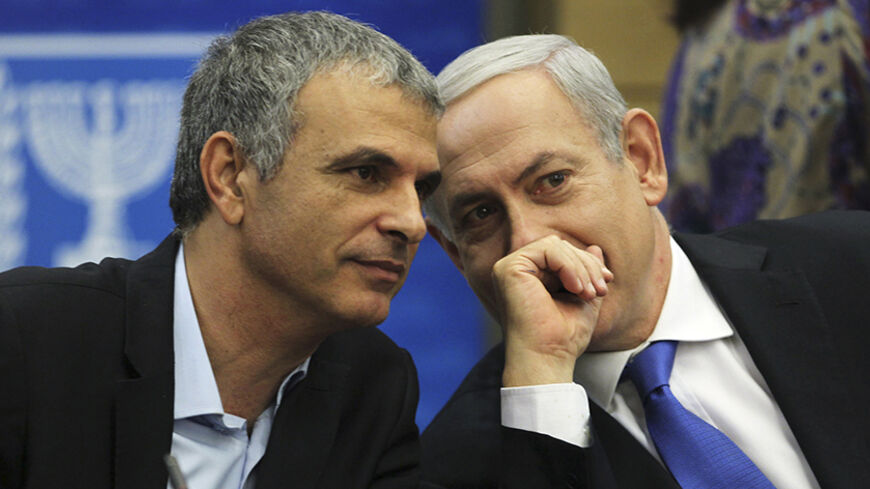 The enthusiastic and much-publicized partnership between Labor Chairman Isaac Herzog and former Minister Tzipi Livni, which took us by storm at a festive news conference on Dec. 10, has proven successful in creating the biggest party in Israeli politics, with 24 seats, according to initial polls. But the shape of the political arena after the 2015 elections will be determined by a completely different couple, one who prefers, for now, to operate behind the scenes based on quiet understanding.

The slate of the power couple of Israeli politics will be seized by former Likud Minister Moshe Kahlon and Foreign Minister Avigdor Liberman, who will hold the top jobs in the next coalition government, whatever its constellation. They are the ones who will determine the identity of Israel’s next prime minister: Herzog, Prime Minister Benjamin Netanyahu or perhaps Kahlon or Liberman, according to a certain rotation scenario.

If they decide to join up with the center-left parties and hand Herzog the key to forming the next government, they will probably demand a rotating premiership for one of them. This will be an outlandish price to pay. If they go with Netanyahu and the right, they will put an end to the dream of a Livni-Herzog joint leadership by the two who enjoy branding themselves as a duo that’s changing the rules of the political game. That description is far from being true. The truth is that the Herzog-Livni party takes votes away from other parties within the left-center bloc, and does not change the balance of power between the right and left blocs.

The joint run by Herzog’s Labor and Livni’s Hatnua could encounter the same problem that Livni faced when she headed the Kadima Party and got 28 Knesset seats in the 2009 elections — one more seat than the Likud — but found herself on the opposition benches after failing to form a government. According to the latest polls, the center-left bloc is weakened by a seeping of votes away from former Minister Yair Lapid to Kahlon’s new party.

Unlike the Herzog-Livni couple, who went on a joint tour to the Gaza border communities the day after announcing their partnership and enjoyed being seen in the bright sun like a couple of love-struck teenagers, the Kahlon-Liberman couple has opted to move under the radar. The two, who signed a surplus vote agreement between Liberman’s veteran Yisrael Beitenu Party and Kahlon’s new Kulanu (Hebrew for “all of us”) party, are the new leaders of the center-right bloc in the coming elections.

Polls indicate that together, the two parties will get some 20 seats, with support for Kahlon, who is shaping up to be the trendy candidate of these elections, potentially still greater. Much like the alliance between Lapid and Economy and Trade Minister Naftali Bennett in the 2013 elections, the Kahlon-Liberman pairing, which, as mentioned, operates according to quiet understandings between the two, will seal Netanyahu’s fate. Although both are fed up with the Likud chairman and prime minister, both are sufficiently experienced not to take him on with pronouncements such as “Bibi [Netanyahu] will not be the next prime minister,” as did Yair Lapid on Dec. 3. Having both come up through the ranks of the right wing, they are leaving all their options open until after the elections.

Liberman and Kahlon, both wily and sophisticated politicians, are well familiar with Netanyahu’s weaknesses. Both were close to him at various times. Both head parties that they rule singlehandedly. Like Liberman, Kahlon holds all the cards in the new party he established. On Dec. 11, ''Kulanu'' submitted a registration request with the party registrar’s office and its articles of association became public. Kahlon is the one who will name the party’s future Knesset members and the party’s board of directors, and will decide whether to join the coalition and under what terms. In other words: Kahlon will decide, Khalon will navigate.

In private conversations over the past year, Kahlon has been saying that he would be the one to name his party’s government ministers, who will be technocrats and not Knesset members. At the same time, the party’s Knesset faction — composed of people he picks who will carry out his instructions — will work to realize his vision of reforms in the housing and banking systems.

Despite his image of accessibility and modesty and his somewhat shy smile, Kahlon is one of the most ambitious Israeli politicians, no less so than Netanyahu or Liberman. He aspires to reach the top of the pile. He is aiming for the prime minister’s office, the first Sephardic (of Middle Eastern origin) Jew to break the glass ceiling. Although he has identified an opportunity to break through this barrier already in the coming elections, he will not announce it as did Lapid, the political newbie, who announced after the last elections that he would be prime minister.

The reason is simple and so right: Kahlon understands that the minute he does so, he becomes a target for political and public elimination. His lack of experience in diplomacy and defense, and that he only heads a medium-sized party, according to the polls, will serve his rival in branding him as being out of touch with reality. But anyone who knows his modus operandi is certain that’s where he is aiming. The highest and farthest place from the Givat Olga immigrants' transit neighborhood, where he grew up: the prime minister’s residence on Balfour Street.

A senior Likud minister recounts that before the 2006 primaries to choose the party’s Knesset candidates, Kahlon was walking around appearing somewhat worried and lacking self-confidence before the voting, with the shy smile of the “kid from Givat Olga,” whereas behind the scenes he had already made every possible deal. When the voting was over, everyone except he himself was surprised that he had taken first place.

Further down the road he kept enjoying surprising people. He always described his accomplishments offhandedly, explained that he was ready to go home at any given moment, that he was not upset by anyone, while floating leisurely above the political arena. This is how he quietly advanced the reform in cellular phone service and was first among the ministers with his unusual ability to identify the public benefits of carrying out a not-so-complicated social reform.

Indeed, his appearance and conduct are misleading. When he took time out from politics in October 2012, he left with a bellyful against Netanyahu, who in all probability initially refused to promise him the finance portfolio and changed his mind only once it was too late. Kahlon had already decided to leave and already knew that he would be coming back to the arena in the next elections with political power of his own, to bring Netanyahu to his knees.

When he took time out from politics, he went to study management at Harvard. When he came back, he set up an institute for the study of social reforms at Netanya College. This was the platform on which he set up his party. Being a popular speaker, he traversed the country and enjoyed important and lucrative relationships with influential media: Israeli main daily Yedioth Ahronoth and the economic newspaper The Marker, with whose veteran editor Guy Rolnik he has a close relationship. Without much fuss, behind the scenes, in his quiet way, he wove his ties with the media that is now helping him on his way to the top. The quiet alliance with Liberman is also part of the same tactics, which after the elections are supposed to bring him to the spot from which he will determine Netanyahu’s fate, the spot from which he will exact his sweet revenge.