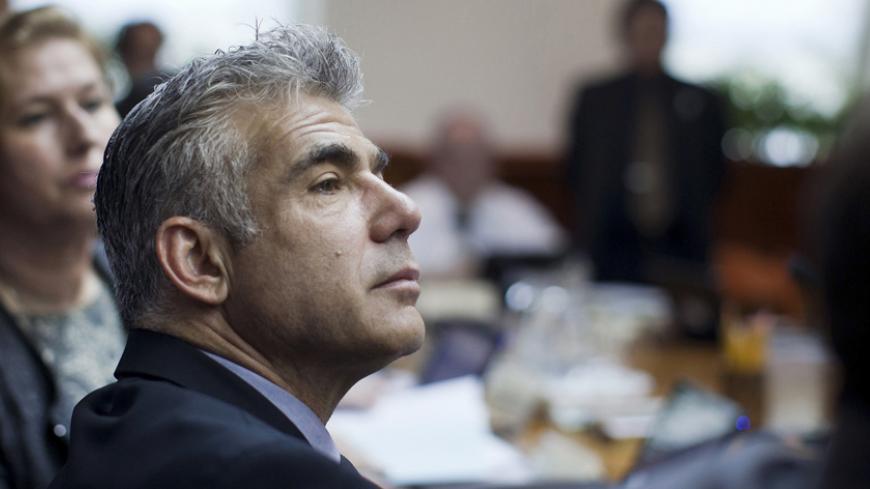 As part of the “We’re fed up with the corrupt!” campaign, which began Jan. 1, the chairman of the Yesh Atid Party, Yair Lapid, fired a very accurate shot directly at the soft underbelly of Labor Party Chairman Isaac Herzog and his party. “Corruption means setting up fake foundations to bring illegal money into the elections,” Lapid said. He was referring to Herzog’s decision to keep silent when he was interrogated in 2000 on suspicion of violating the Party Funding Law, while serving as the head of former Prime Minister Ehud Barak’s election team one year earlier.

This attempt to “fire inside the APC [armored personnel carrier]” — meaning hurting one's own camp — as Herzog described Lapid’s comments, turned out to be the cherry on last week's cake, as far as Prime Minister Benjamin Netanyahu was concerned. It was a successful week for him, after a period of pessimism. The corruption investigation into the Yisrael Beitenu Party, the disintegration of the Shas Party and the reasonable Knesset list that Likud voters chose in the primaries on Dec. 31 granted new momentum to the ruling party. Then Lapid got up and launched his corruption campaign. While he did place Netanyahu high on his shady list, he also hurt Herzog and the Labor Party.

Infighting in the center-left bloc helped Netanyahu in the 2009 elections and again in 2013. Now it seems that although they learned their lesson, as evidenced by the union of Labor with former Minister Tzipi Livni’s Hatnua Party, war is breaking out again — this time between the joint Labor-Hatnua list and Yesh Atid, both of which are competing over the same voters. This is not good news for the center-left bloc, which should have cooperated to take down Netanyahu. Once again, it is being dragged down by internal squabbling.

Lapid began attacking the Labor Party earlier on Jan. 1, when he criticized the addition of professor Manuel Trajtenberg to the joint Labor-Hatnua list as its candidate for finance minister. The Herzog-Livni duo took pride in its latest acquisition, showing him off at a press conference the team organized. Lapid was quick to rain on their party's parade. “Anyone who brings in Trajtenberg is introducing a very clear economic policy of higher taxes,” Lapid said.

That is how just 2½ months before the March 17 elections, Lapid launched an organized attack on the Labor Party and Herzog, forcing them to fire back.

The blunt attack by Lapid came as a surprise to the Labor Party’s campaign managers. Immediately after the decision on Dec. 2 to move up the elections, the center-left parties took heed of the lessons of previous elections. They reached a series of understandings, according to which there will not be any fighting among themselves. As it turns out, these understandings barely lasted three weeks. In an interview with Israeli TV Channel 2 on Jan. 2, Trajtenberg said that Lapid “made a big mistake” when he took over the Finance Ministry, and that “it is impossible to expect an outsider who is unfamiliar with the field to lead a social policy of change, rather than of maintenance.”

Herzog took the gloves off too in interviews and political meetings over the weekend, attacking Lapid’s performance as finance minister, and particularly his transfer of funding to the settlements. “There is a good chance that I will put together the next government, if we don’t let all the Lapids fire inside the APC,” Herzog said. “I remember the 600 million shekels [$152 million] that were transferred to isolated settlements in Judea and Samaria through the Settlement Division of the World Zionist Organization, and how that was undersigned by Finance Minister Yair Lapid.”

What caused Lapid to veer off course, considering the initial understandings that there would be no attacks within the bloc? The answer is quite simple. Yesh Atid lost some of its seats to the Herzog-Livni list, the united party that, according to the polls, appeared to be turning into a 23-24 seat party. This makes Herzog the center-left candidate for prime minister. Having failed to convince Livni to join forces with him, Lapid is left isolated. The possibility of him being the center-left candidate to lead the country became negligible.

Unlike in the 2013 elections, this time Lapid is not trying to convince right-wing voters to vote for him. He gave up on them long ago. That means that for him to come out of this election with reasonable results — i.e., with more than 10 seats — he must take seats away from Herzog and Livni. In the difficult battle that Lapid is waging, he is appealing to the most easily available source of seats. In the 2009 election, the phenomenon was called “cannibalism on the left.” It happened after the Kadima Party — then headed by Livni — won 28 seats, making it the largest party in the Knesset. Livni almost destroyed the Meretz Party, which dropped to just three seats, and dealt quite a devastating blow to the Labor Party, which came out of the elections with just 13 seats.

Subsequently, Livni failed to form a government because her entire bloc had just 45 seats. The bloc grew in 2013 because Lapid was able to win seats from the right, but because of the infighting and the bloc’s inability to unite behind a single candidate, its initial achievement had no practical outcome. Both Livni and Lapid rushed to join the Netanyahu government instead.

Now, too, the state of the center-left is problematic, mainly because of the troubling times that the Yisrael Beitenu and Shas parties are experiencing. These predicaments are sending voters back to the Likud, thereby strengthening the ruling party. Together with former Minister Moshe Kahlon’s Kulanu Party, those two parties were supposed to provide the majority that Herzog would need to form a government. But chances of this scenario becoming reality are getting slimmer. What is left is the same number of seats in the center-left bloc, with Herzog and Livni harming Lapid and Meretz, but failing to win votes from the right.

The way things look now, the center-left bloc will fail to come together in these elections, too. The combination of Herzog and Livni is not enough to draw voters from the right, and the number of seats that the Labor Party, Yesh Atid and Meretz will win is in the ballpark of 40-plus. This means any declarations by Herzog and Livni that there will be a turnabout in these elections currently have no basis in reality. The way things look now, the best possible scenario is that they will reach a rotation agreement with the Likud. In other, less positive scenarios, it will be either Labor or Lapid’s turn to legitimize Netanyahu in his fourth term.