While the Zionist Camp is preoccupied with internal disputes and losing relevance in the political sphere, Yair Lapid's Yesh Atid is soaring in the polls. 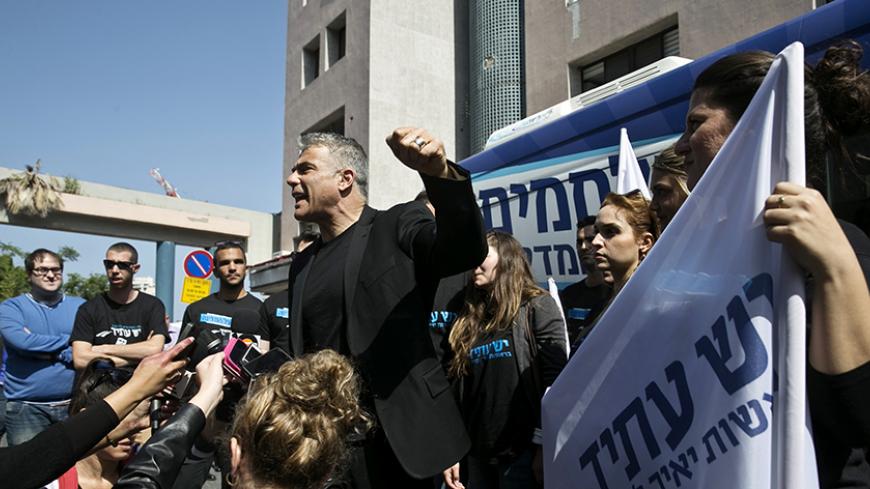 At the end of a perfect week, with various polls giving him somewhere between 19 and 21 Knesset seats if elections were held now, the chairman of the Yesh Atid Party, Yair Lapid, updated hundreds of thousands of his Facebook followers about a successful meeting he had the night before “in the living room of Jackie and Avi Zrihan in [the town of] Ashkelon.”

Lapid wrote, “Most of those present voted Likud, some were even members of the Likud Central Committee, but way before any political affiliation they are citizens who love the State of Israel." He continued, “'Just like you,’ I told them, ‘I grew up in a home that worshiped [late Prime Minister] Menachem Begin. His strength lay in his refusal to accept that something was impossible.'”

Lapid is adhering to a coherent strategic game plan designed to land him in the prime minister’s office in the next elections. To that end, he is canvassing Likud strongholds, hoping to pick up several more Knesset seats from that camp. This is everything that Isaac Herzog’s Zionist Camp failed to do in the March 2015 elections, leaving him in the opposition, even after he reached the finish line with the equivalent of 24 Knesset seats.

Lapid’s description of his nocturnal visits to the homes of Likud constituents, preferably those of Mizrahi (Middle Eastern) origin, with him being focused and enjoying the support of a calm party, highlights the Zionist Camp’s failure to forge a unified and militant alternative to the prime minister. If you will, Lapid in the living room of the Zrihan family in Ashkelon is the mirror image of the shouting match at the March 7 meeting of the Zionist Camp’s Knesset faction.

Erel Margalit, the Knesset member who shows every sign of intending to challenge Herzog for the leadership of the Labor Party, which is the main partner within the Zionist Camp, engineered a deliberate confrontation by demanding that the internal party primaries be moved up. Margalit’s tirade included accusatory language such as, “We are sinking … to delay primaries for two years is to put the party in the freezer and give Netanyahu the keys to the country.”

But the highlight of the meeting was the heated argument between Margalit and co-leader of the Zionist Camp, head of the Hatnua Party, the smaller partner, Tzipi Livni, who claimed that the Zionist Camp was being torn apart by the personal issues of Labor Party members. “What personal issues? The party has a constitution, Mrs. Livni,” Margalit interrupted her, shouting. “In this party, you are a guest.”

The prized video recording, captured on a participant’s cellphone, was probably leaked to the media from Margalit’s direction, successfully accomplishing two goals: making him politically and publicly relevant and challenging Herzog from within. Although he came in for some biting comments from Knesset members Eitan Cabel and Merav Michaeli, the bottom line was that most of the Knesset members present decided to lay low.

Margalit was right on at least one point. Livni is a guest in the Labor Party, as she herself takes pains to point out at every opportunity, including during the strident argument with Margalit, explaining that she represents a different party (Hatnua) and doesn’t care about the squabbling within the Labor Party. Last November, she stormed out of a Zionist Camp meeting, explaining that if the Labor Party wants to shoot itself in the head, she’s leaving.

One can understand Livni, who stitched together the partnership with Herzog just before the last elections. The political union was supposed to restore her to a leadership position, but as of now she and Herzog are treading together in the shallow waters of the opposition. Whereas Herzog at least has the leadership of the opposition as a pulpit, Livni has been relegated to the status of just another Knesset member, a far cry from the days when she very nearly became prime minister.

But this is not the way to create an alternative to the Netanyahu government. If Livni explains every chance she gets that she is actually just a visitor and the host party is of no interest to her, why should the public at large care about this party? This type of message is simply not a vote getter.

Livni’s troubles stem largely from her gamble on Herzog. Now that his leadership is under fire and his place at the top is no longer assured (the party's constitution stipulates that after an election failure it must conduct primaries), there’s no guarantee that in the next elections she will once again be assured of the No. 2 slot in the party’s Knesset list if Herzog fails to win the top one.

Above all, Livni appears to have been left without a sustainable party platform. The party she formed, Hatnua, never took off. Without party institutions and activists, Hatnua is simply an election shelf item — just like the Zionist Camp, which failed to build itself up as a movement and simply remained an ad hoc arrangement aimed at replacing the current government. Its failure in the last elections in March 2015, or, in fact, the failure to try and establish the Zionist Camp as a durable label, as well as last week’s clash at the faction meeting, signal its demise, even if not officially so. Now the course stitches with which the partnership between Labor and Hatnua was cobbled together are evident for all to see. And let’s not forget that Knesset member and former Defense Minister Amir Peretz has already left Hatnua and returned to Labor’s fold (and will likely run for its leadership).

The Zionist Camp’s failure was not just an electoral one. It was also a failure to forge an alternative to the current rule. And while the Zionist Camp is nearing its end, other opposition figures are emerging from the wings — especially Lapid and Yisrael Beitenu head Avigdor Liberman.

Lapid’s rise in the polls is commensurate with the decline of the Zionist Camp. They are linked, like connected vessels. In various permutations, the same thing has happened to the center-left camp in all recent election campaigns, with the same result. The center-left is unable to provide a tie-breaker between left and right in order to return to power. Now Lapid is trying his hand, but for now he is growing at the expense of the votes Herzog and Livni culled in the last elections.

The good news for Netanyahu is that the center-left camp in the opposition is once again unable to unite under one leadership and the votes keep going back and forth among the parties in that bloc. The voters who Netanyahu is losing have currently found a home with HaBayit HaYehudi Chairman Naftali Bennett and with Liberman.