The Zionist Camp might be facing its very last chance to save itself from oblivion by reinventing its image and uniting the center-left electorate. 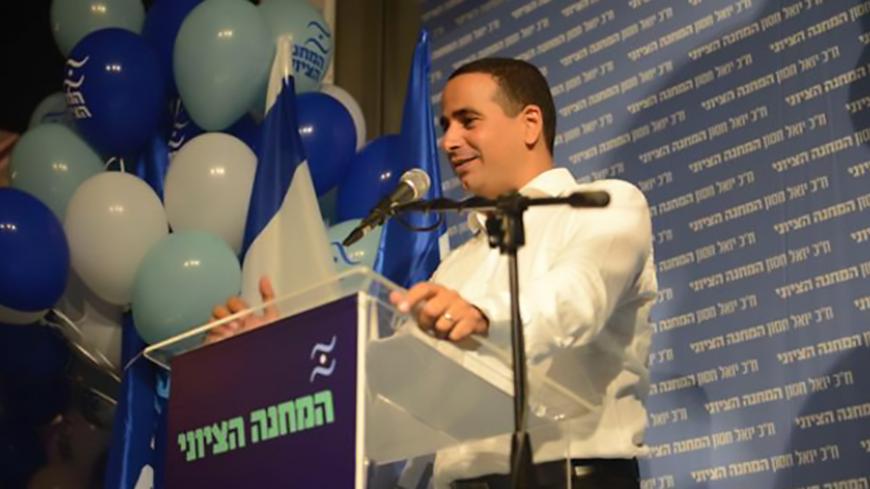 Blue and white balloons brought a festive air to the events hall in Bat Yam on the night of Oct. 30. The Zionist Camp, Israel’s main opposition party, was beginning to show new signs of life.

One day before the Knesset opened its winter session, Knesset member Yoel Hason gathered 400 party activists for the event, called “Israel must wake up!” Despite the name, it looked like the event was intended to wake up his own party first and foremost, before it finally loses its status to Yesh Atid as Israel’s biggest opposition party.

In attendance were Zionist Camp leader Isaac Herzog, his second in command Knesset member Tzipi Livni and about half the party’s other Knesset members. Considering its crash in recent polls, some of which give the party fewer than 10 seats if elections were held now, an optimistic mood pervaded the room.

Hason, a veteran member of the Knesset, has in the past represented two other major parties — first the Likud and later Kadima. In his Oct. 30 speech, he identified another major problem facing his current political home apart from its drop in the polls and the leadership crisis it has been facing for many months now. He claimed that the Zionist Camp does not function like a party that sees itself as forming a potential government.

Indeed, members of the Zionist Camp are of the highest quality and constitute some of the finest members of the current Knesset. Its faction includes diligent and effective young representatives such as Stav Shaffir and Itzik Shmuli. Yet the party as a whole has failed to present itself to the public as an alternative to the Likud in forming a new government.

In many ways, the Knesset’s winter session, which opened Oct. 31, is the Zionist Camp’s last chance to rehabilitate itself. The conditions for that are not simple. Its main rivals are not just the Likud and Prime Minister Benjamin Netanyahu, but also Yesh Atid, a party considered to be part of the center-left bloc. While that party’s leader, Yair Lapid, insists that his party is in no way a left-wing party, a significant part of its electorate identify as belonging to the center-left bloc and voted for like-minded parties in the past.

The event organized by Hason followed a two-day, team-building workshop organized by the faction’s chair, Knesset member Merav Michaeli, in the Ein Gedi desert oasis for its sitting Knesset members to prepare them for a return to the parliamentary work. There, too, one of the main messages was not to leave the opposition front to Lapid and his people.

The party is facing no easy challenge. Composed of two separate parties, the Labor Party and the Hatnua Party, the Zionist Camp must now reinvent itself and explain to the public who abandoned it why it once again deserves their trust. On the other hand, the ruling party on the right is not at its high point either, at least in terms of public support. Day after day, it gives the opposition reasons to attack it. It also gives the opposition plenty of reasons to wage a principled campaign against it as an alternative to governing the country. This ranges from improper behavior of Likud party members such as Oren Hazan, who is embroiled in incidents involving drugs and a casino, or the knife incident involving Deputy Minister Yaron Mazuz, all the way to its initiatives to pass anti-democratic legislation, like the attempts to take over public broadcasting and the diplomatic standstill.

That was, in effect, Hason’s main message to his colleagues in the party: Think big! Get your self-confidence back! We can take over the government if only we do the right thing.

In his speech to the conference, Hason criticized the excessive focus on social legislation that characterizes the Zionist Camp, saying that this does not position the party as an alternative to the Likud. In his own words: “Social legislation has overwhelmed our desire to present an alternative. Instead of being on the attack, we busy ourselves with legislative amendments.”

In a conversation with Al-Monitor, Hason said, “Personally, I grew up in the Likud, a party where you think like you’re in the ruling party. You think about how you would change the situation, not how you can join the governing coalition. We need more legislative initiatives from the entire faction, rather than point-specific legislation. We must think nationally, instead of just thinking about how to annoy the government. We must challenge the government ideologically, including on the diplomatic front.”

Hason explained that instead of flirting with the right (negotiating to join the coalition), the Zionist Camp should present an alternative out of confidence that its path is the right one. As he said, “We fail to be convincing on diplomatic and security issues, because they have succeeded in painting us as weak and too willing to make concessions. Obviously, this is not true. Our leadership is capable of leading this country to a diplomatic agreement [with the Palestinians] that would ensure our security. The thing is that we must first convince the public that this is in our interest first of all, and in the interest of our children. I do not foresee a Palestinian state as a favor to the Palestinians, nor do I want to separate from them for that reason. I want to do it because it is in our interest.”

Nevertheless, Hason also realizes that before Netanyahu can be replaced and prevented from having another term, the center-left must be united as a single bloc. Elections have proved time and again that a divided center-left bloc loses its chance to form a government. It happened to the Kadima party with 28 seats — one more than the Likud — under Livni in 2009, and yet the Likud formed the government anyway. Hason, who was a Knesset member for Kadima at the time, remembers well what happened and considers it a major opportunity that was missed.

It happened again in the most recent March 2015 election, when the Zionist Camp won a respectable 24 seats but was still tossed into the opposition. There were those in the political system who claimed that if Lapid had run with them under a single party platform, Herzog would be prime minister today. The problem is that Lapid, who should have been part of such a move, has no intention of even considering such a setup. While Livni, Hason and others have suggested open primaries for the entire bloc, Lapid is living in other political realms. He is turning to the moderate right, based on the assumption that their votes will lead him to power.

“What Lapid has to realize is that without a unified camp, Netanyahu will receive a fifth term. I am certain that in the next election, he will present a unified party with [HaBayit HaYehudi head] Naftali Bennett or [Yisrael Beitenu head] Avigdor Liberman. What that means is that if Lapid runs alone, he will be Netanyahu’s foreign minister at best, and there will be no real change. If Yair Lapid had joined forces with us in the last elections, Netanyahu would not be prime minister today,” Hason said.

It is not hard to guess how Lapid will respond to any hand extended to him by the Zionist Camp. The chairman of Yesh Atid is a soloist, who makes a point of distancing himself from anything to do with the left. That is why, if the Zionist Camp really wants to rehabilitate its public image, the members of the party must fight against Lapid from within the center-left bloc, while at the same time abandon the option of a national unity government. Instead, it must truly assume the role of the largest opposition party. The Knesset’s upcoming winter session is its last chance to do all of that.